By the end of This Is Us‘ current and final season, The Big Three likely will lose their mom. And in this week’s episode, an amuse-bouche of the sadness to come, Pearson patriarch Jack loses his.

The hour takes place entirely in flashback, with Jack leaving Rebecca and the kids in Pennsylvania while he treks to Ohio to attend Marilyn Pearson’s funeral. All of that alone time kicks up lots of capital-F Feelings for Jack; relatedly, Milo Ventimiglia is pretty damn great throughout.

Read on for the highlights of “Don’t Let Me Keep You,” and make sure to check out our post-episode chat with Ventimiglia, too.

TOO LITTLE, TOO LATE | As Jack looks through his closet for something appropriate to wear to his mother’s funeral, he muses about their weekly Sunday phone calls, which she always would end by saying, “Don’t let me keep you.” As is the way of these things, he can’t quite believe she’s gone. “It doesn’t seem real,” he tells Rebecca.

Marilyn had been living with her relative Debbie in Ohio, where Jack moved her after she left his father all those years ago. He’s going to make the trip alone; it’s a long drive, and there’s a snowstorm coming in. Rebecca protests, wanting to be there for him, but he gently shuts her down, saying the kids didn’t really know his mom at all.

When he arrives in Ohio, Debbie — his mom’s cousin, played by The Practice‘s Camryn Manheim — doesn’t exactly shower him with her condolences. “Look who finally showed up,” she says. “Only took you 13 years.” 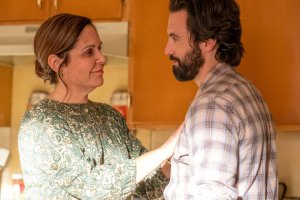 As we learn during Jack’s stay at Debbie’s, she’s right: He never visited his mother after she left Pittsburgh. And, partially because she was afraid to be in Jack’s abusive dad’s physical radius, she only came to stay with him and Rebecca when the kiddos were about a year old. Jack is surprised to learn that, rather than the mess he expected, his mother had already seen to everything regarding her memorial service. The only major task left is for someone to write a eulogy, and Jack says he’ll do it.

MARILYN’S OTHER LIFE | Jack soon finds out that his mom had a boyfriend named Mike, who lived nearby, and they shared a cat named (and forgive my enthusiasm, but this is perfection) Cat Benetar! Mike has a fun moustache and is super into WWF, and he surprises Jack by knowing all about Rebecca and the kids. Marilyn was proud of her family, he tells Jack. “She looks happy,” Jack says, uneasily poring over the snapshots Mike hands him. “She was. We were,” Mike says, tearing up. He then tells Jack that Marilyn thought her older son was her hero, because “You were the one that got her out of that house.” This rankles Jack, who mutters that he knew nothing about her life and then leaves.

The next day, Jack joins Debbie, Mike and another of Marilyn’s friends for a round of her favorite drink — 7&7s — at the local bar. Everyone but Jack shares happy stories of the woman they loved; later, a slightly inebriated Jack goes back to Debbie’s and does the thing he’d said he didn’t want to do: He calls his father. 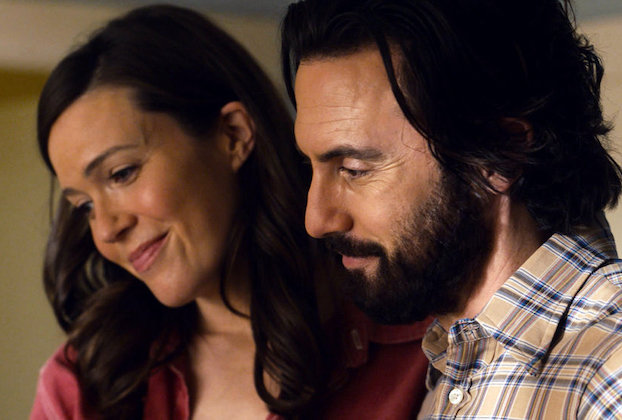 “Three days ago, Mom had an aneurysm and she died,” he says bluntly. His dad, clearly affected, asks when the funeral is. “I wasn’t inviting you,” Jack spits back. With the alcohol loosening his tongue, Jack unleashes on his pop. “My whole life I never really knew her. She had a real life out here, and I never saw it,” he says. “And now she’s dead, and I missed the whole thing because of you.” Jack then forbids Stanley from attending the funeral. “I’ll do what I damn well please,” his dad says, hanging up. 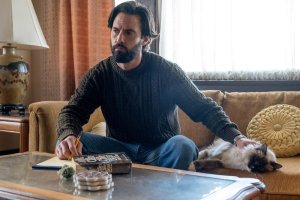 SURPRISE GUESTS | Jack is having a tough time writing the eulogy, and a phone call to Rebecca jogs some more of his memories. He recalls a wintry day when he broke his sled on a steep hill, then his mom helped him hide it from his dad and she made him tomato soup and hot dogs for lunch. He also remembers her telling him that he should bring the kids for the visit so they can go ice-skating on the pond near Debbie’s home.

Still, on the day of the service, it’s not clear what he’s actually prepared to say — and the idea of his dad showing up has Jack on edge. He’s just started speaking at the lectern when the door opens… but it’s Rebecca and the kids, who’ve surprised him. Jack then gives a brutally honest speech about his tough upbringing, and how he went on to create a better life for himself. So did Marilyn, he goes on, adding that she filled her life with new details “worth remembering.” He points out how Rebecca and the kids gave him a new sense of home, and he thanks everyone there for doing that for his mom. “OK Ma,” he says in closing, “don’t let me keep you.” 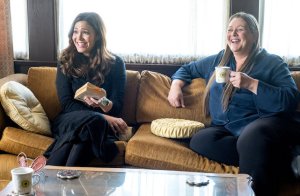 ‘I DON’T HAVE A MOM’ | With the service and his speech behind him, and with his family nearby, Jack is visibly relieved. Mike plays WWF with the kids. Debbie embarrasses Jack by noting that his mom read the racy Clan of the Cave Bear three times. (I think it was issued to you if you were female in the 1980s.) They all take the kids skating on the pond, with The Big Three wearing skates their grandma bought them for a visit just like this. It’s sweet.

Back in Pennsylvania, Jack makes tomato soup and hot dogs for Kate, Randall and Kevin, flashes back to eating the same meal with his mom, and hastily exits the kitchen before his kids see him cry. Rebecca follows him. “I don’t have a mom anymore,” is all he can get out before he starts sobbing. She holds him for a moment before he inhales sharply a few times and wipes his eyes, and then pulls himself together as quickly as he’d come apart. They walk back into the kitchen and sit with the kids, who are oblivious.