There’s no way the very dangerous choice that Rue makes in this week’s Euphoria will end well for her. She even tells us so herself, in very entertaining fashion, in the first half of the hour.

“Now, as a beloved character that a lot of people are rooting for, I feel a certain responsibility to make good decisions. But, I relapsed,” she says, speaking directly to the camera in a segment similar to last year’s d–k-pic slide show. (There’s even a joke about it!) “In all fairness, I did say in the beginning I had no intentions of staying clean.”

She goes on to say that she understands our collective desire for her to be OK, to pull herself together even a little bit. “The country’s dark and f–ked up. And people just want to find hope… anywhere. If not in reality, in television.” However? “Unfortunately, I’m not it,” she says with a shrug, swigging some cough syrup.

And that really seems true in the episode, which also gives us a nascent Jules/Elliot flirtation and a Cal bloodying that’s rather satisfying. (Yes, that is the second time in three weeks that I’ve hailed a Jacobs man getting whupped, and no, I do not feel sorry about that.) Read on for the highlights of “Ruminations: Big and Little Bullys.”

CAL, UP CLOSE | This week’s episode-opening deep dive focuses on Nate’s dad, Cal. We see his life as a high school senior, where he ruled the wrestling team, planned to attend Duke University and spent a lot of time with his best friend, Derek. As Rue’s voiceover tells us how close and comfortable the boys were with each other, we get several instances of Cal’s gaze lingering a little longer on his friend’s body than is polite.

Still, when Marsha makes it clear that she’s into Cal, they start dating. She’s very forward, and though Rue tells us that sometimes makes teen Cal uncomfortable, “he was grateful she pushed his boundaries.” When Marsha performs oral sex on Cal in his car one night, “he couldn’t wait to tell Derek,” Rue says.

So he does, while the guys are lying side-by-side on Cal’s bed one afternoon. Cal’s dad, a severe man who seems a lot like Future Cal, barges in and asks Derek to leave. He’s so suspicious of his son’s friendship (and bodily proximity to) with Derek that he orders Cal to stand up — most likely to see whether he’s visibly excited, which is wrong on so many levels — and Cal refuses. (Side note: That’s likely the same reason Derek hugs his gym bag to his midsection as he exits the room, yes?) Cal’s father seems disgusted. That night at dinner, Cal announces to his family that he’s met a girl. Soon, as a very naked montage depicts, Cal and Marsha are having sex every chance they can get.

Graduation rolls around, and “Derek insisted they celebrate, just the two of them,” Rue says. So the boys drive to a gay bar — though Cal doesn’t seem to get what’s going on right away — and pound some tequila shots. Soon they’re being silly, lip-syncing to INXS’ “Never Tear Us Apart” and goofing around on the dance floor. But — you know where this is going, right? — soon the goofiness wears off, they draw closer, and then they’re dancing with their faces pressed to each others’ necks. They kiss, then they kiss some more.

The next morning, Cal wakes up happy… until Marsha calls to tell him she’s pregnant. He hangs up, curls into the fetal position in bed and sobs.

RUE’S NEW COVER STORY | In the present, when Gia catches Rue loopily dancing through the house to “Call Me Irresponsible,” she asks, “Are you high?” That kicks off an aside in which Rue tells us exactly how she’s hiding her relapse from her sister and friends: by covering it with a different kind of drug use. As she explains, we watch a flashback to when Rue casually informed Gia that she might start smoking weed as a way to deal with daily panic attacks. That incensed her little sister, who has already had her life upended by Rue’s addiction. They got into a shoving match. They cry. “When you do drugs, it’s not like when other people do drugs,” Gia said. “It’s better than committing suicide,” Rue countered sadly. Eventually, they arrived at a point where Gia made Rue “promise me it’s just going to be weed and not anything more.” Rue did. 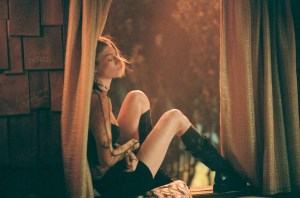 So when Gia sees her sister tripping the light fantastic in the kitchen, she accepts the notion that Rue is on marijuana. By the way, weed is also the reason Rue gives Jules for why she “forgot” to mention Elliot to her, but Jules is less easily appeased. When Rue mentions that she thinks Elliot and Jules might actually get along, Jules says nope, “because he wants to f–k you.” And when Rue denies that, the girls go to Elliot’s house so Jules can literally interrogate him, with a lamp and everything.

During the course of this conversation, we find out that Elliot’s sexuality is fluid and that he might kinda be interested in both Rue and Jules but he definitely wants to be friends with both of them. He teases Jules about wearing a binder around her chest, and she deflects, but the whole encounter seems to relieve Jules of some of her anxiety about Rue’s new pal. As the girls ride their bikes home, Cal passes them in his truck, which is always a buzzkill. But then Rue and Jules nip into a backyard for some nookie, Jules guides Rue’s hand down the front of her pants, and all is well… until Rue goes home, snorts heroin and slumps over. 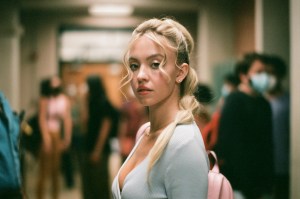 ‘SOMETHING CAME UP’ | Guys, I’m so concerned about Cassie. She starts getting up at 4 am each day to perform an elaborate beauty ritual, all in hopes that Nate will actually notice her when they pass in the halls. He doesn’t… until the day she dresses almost identically to Maddy. The extreme beauty prep “was her way of telling him she was his,” Rue voiceovers. (There’s also a hilarious bit in the girls’ room where Maddy, Kat and Rue can’t figure out why Cassie is dressed like she’s auditioning for an upcoming production of Oklahoma.)

In fact, they’ve been meeting up every Friday night for three weeks to have sex. “I love that I’m your secret and I can’t tell a soul,” she tells him while they’re in the middle of it. “I love how f—king sick you are,” he whispers back. They’re so loud that Cal and Marsha can hear them through the walls, and Mr. and Mrs. Jacobs do nothing except muse about how great it would be to re-live their high school years. Is anyone else getting chilly from the breeze from all of these RED FLAGS CHAOTICALLY FLAPPING?

That Friday night, Cassie runs out to meet Nate at their rendezvous spot, but he’s not there. “Something came up sorry. See you next week,” he texts as we watch him bring flowers to Maddy at the house where she’s just put her babysitting charge to bed.

ASHTRAY FTW | Cal is so agitated about the whereabouts of his missing disc that he takes matters into his own hands and goes to Fez’s place. But Ashtray is a step ahead of him and surprises him at the car, gun pointed to Cal’s head. The boy marches him inside and repeatedly bashes Cal’s head with the butt of the gun to call his bluff: Ash knows Cal’s not going to involve the police, no matter how much he threatens to.

During the scene, Cal realizes that Nate lied to him about the reason Fez beat him up at the new year’s eve party. “You telling me you had sex with Jewel?” the drug dealer says, and I cannot accurately convey to you how much everyone referring to Jules as “Jewel” in this scene made me chuckle. When Cal says he wants the disc, Fez has no idea what he’s talking about — but he does let Cal know that Nate is “in love with Jewel.” Cal is confused. Fez is confused. “What kind of weird-ass father-son s—t is going on here, bro?” Fez wonders. Right there with you, dude.

Eventually, Fez (and a reluctant Ash) let a bloodied Cal walk out of there in exchange for his promise that he and Nate stay out of Fez, Rue and Jules’ life “until the end of time.”

RUE BENNETT, INC. | When Rue finishes the last of Fay’s heroin, she decides that becoming a dealer will be her best way to free drugs. Fez (smartly) dismisses her before she can even start her pitch, so she borrows one of her mom’s blazers and goes straight to Laurie, Fez’s supplier we met in the season premiere.

Rue has come up with a plan where she and some of her high school friends will sell drugs for Laurie. What could go wrong?! Laurie hears her out and offers $50K in product; a suddenly scared Rue takes $10K instead, opting to start small. “Rue, if you screw me, I’ll have you kidnapped and sold to some real sick people,” Laurie says, her affect flat but her words chilling. “I always find a way to make my money back. I’m serious.”

Rue takes the suitcase full of drugs to her Narcotics Anonymous meeting, where Ali knows something is up. She lies and says the luggage is filled with books, and she’s really mean to him. When he says she can’t blow him off like he’s her parent, she fires back that no one is looking o him to be a parent. “You cross that line again, we’re done!” he shouts, highly angry. “Or what, Ali?” she says. “You’re gonna hit me?” He’s taken aback. She leaves. It’s a rough thing all the way around.

At home, Rue opens the suitcase — which contains a stupid amount of drugs — and immediately samples the wares.

AROUND SCHOOL | Meanwhile, Lexi has written a play and gotten permission to perform it at school. (There’s a very fun aside that’s in the style of a behind-the-scenes featurette with Lexi as showrunner.)… Ethan auditions for the show and gets a part, but Kat doesn’t seem to care… Kat meets Ethan’s parents but is so nervous that the dinner doesn’t go well at all.