The Revolutionary War hasn’t yet gotten underway in Outlander‘s upcoming Season 6, but it’s certainly coming — as the inhabitants of Fraser’s Ridge soon will learn.

“The tide has turned,” Claire says ominously at the start of the show’s new trailer, which Starz released Wednesday. The roughly two-minute preview has a similarly portentous feel, as we watch the time-traveler and her husband deal with threats both foreign (Redcoats in their front yard) and domestic (book readers, you’ll know what we mean; everyone else, you’ll find out).

The video above gives us glimpses of the season ahead, which premieres on Sunday, March 6, at 9/8c. Of particular note: the prominence of the Christie family, led by one of Jamie’s fellow Ardsmuir prisoners, Tom. And, as if Jamie and Claire didn’t have enough problems already, we definitely get a quick visual of Richard Brown (who, you’ll remember, promised to avenge his piece of trash, rapist brother last season) leveling a gun at someone or something.

According to Starz, the show’s sixth season “sees a continuation of Claire and Jamie’s fight to protect those they love, as they navigate the trials and tribulations of life in colonial America. Establishing a home in the New World is by no means an easy task, particularly in the wild backcountry of North Carolina — and perhaps most significantly — during a period of dramatic political upheaval. The Frasers strive to maintain peace and flourish within a society which, as Claire knows all too well, is unwittingly marching towards Revolution. Against this backdrop, which heralds the birth of the new American nation, Claire and Jamie have built a home together at Fraser’s Ridge.”

Press PLAY on the video above to see the trailer, scroll down to see the official Season 6 poster, then hit the comments with your predictions for the season ahead! 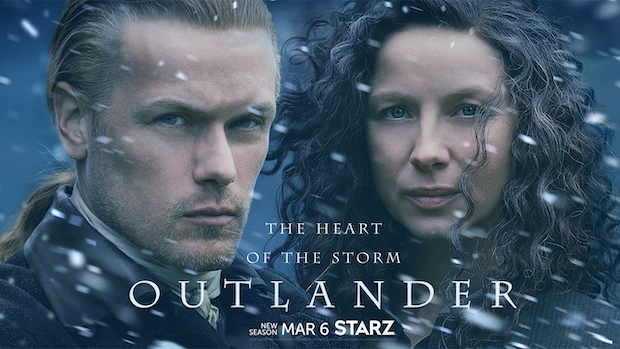