There’s no mistaking How I Met Your Father‘s Sophie for Ted Mosby, but their hearts are definitely in the same place when we first meet them. Like How I Met Your Mother‘s doe-eyed protagonist, Hilary Duff’s character has convinced herself that she’s ready to settle down and find “the one,” regardless of whether she’s actually ready for that level of commitment.

“She has not made herself whole,” Duff tells TVLine when asked for her initial read on Sophie. “She always finds the positive, which is an extremely endearing and amazing quality… and a hopeless believer that she is going to find true love.

“I think it’s really fun watching her try to get both of her feet on the ground at 30,” Duff posits. “She’s not crushing life by any means, but on this one night, lightning strikes, and she meets all of these people who are going to help her become whole, and that are going to give her hope on her journey.”

Below, the Younger vet weighs in on the premiere’s two major reveals, and whether the sequel’s central mystery has caused her to look at certain scenes in a different light. 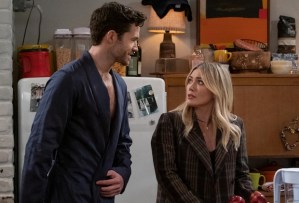 TVLINE | Which took you more by surprise: Was it the reveal that all these men could potentially be the dad? Or was it stepping into the old apartment for the first time?
It was the journey that all of those people could be the dad. All the guys are so lovable, and so cute and so quirky in their own manner and in their own way. You’re like, “Oh! Ohh! Ohhh!” There’s opportunity everywhere for Sophie, and she can’t freaking see it. You know that there’s an adventure in store for her, but she’s kind of in this space where she feels… not trapped, but she’s not making big strides ahead in her life yet. And as the viewer, you’re like, “Oh, you have some fun in store for you.”

TVLINE | Was the new framework — that Sophie has already met the father — part of what appealed to you about doing this show? That it wouldn’t just be a rehash of HIMYM, and it would tell this love story in its own, unique way?
I think if we were trying to copy the original show, there’s just no way to live up to that. They were so buttoned up as a cast, and so funny, and we’re so lucky to have [original series creators] Carter [Bays] and Craig [Thomas] on board supporting this show told from a female perspective. Half of our crew was on How I Met Your Mother, so we have this [group] of people that can guide us, but it’s really not the same show by any means. Sophie is not Ted, and there’s not someone trying to be Barney. I love that the writers used the very first episode as an opportunity to show the occupants of this apartment, where everyone fell in love with the original cast, but you know that we’re all going down a very different road. 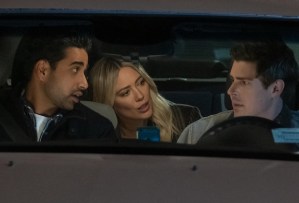 TVLINE | Does knowing that one of these men is most likely the father ever influence on how you interpret (or approach) your scenes with them?
Sometimes it does… I have a very meaningful moment [coming up] with Suraj, who plays Sid, and in the back of my mind, I’m like, “How am I going to play this? Is there something here yet? Is there a little part of Sophie that’s looking at him a different way because of this one moment?” So I try to never close the door [on any one possibility]. There are a lot of different opportunities here for the guys to be involved with Sophie somehow. [As Sophie], I think if I just open up my heart, there’s always that opportunity for it to swing either way.

Who do you think will turn out to be Sophie’s baby daddy? Log your early predictions in the comments.