Bridgerton’s Daphne is as always looking resplendent, yet nonetheless surely is missing her mister, in a new flurry of photos from Season 2 of Netflix’s hit period drama. 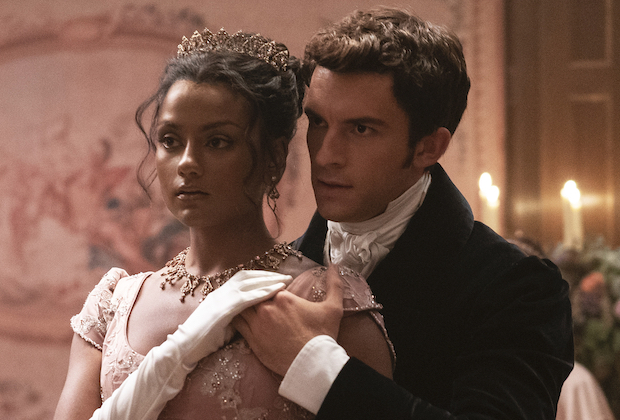 As well reported last year, Season 1 breakout Regé-Jean Page avowed that his Simon, Duke of Hastings, would not be a part of Season 2 — though he later would tease to British GQ,  “Isn’t there something wonderful about being surprised by what you weren’t suspecting?”

Also presented for your viewing pleasure in the attached Season 2 photo gallery (click here for direct access) are fresh photos of ‘Ton newcomer Kate Sharma (played by Sex Education’s Simone Ashley) holding her own with the Bridgerton boys on the range (and getting cozy with one in particular), Queen Charlotte catching up on the latest goss from Lady Whistledown, and Eloise and Penelope surely plotting something.

Much like author Julia Quinn’s sophomore book, Season 2 (premiering Friday, March 25) will center on Anthony (played by Jonathan Bailey) as he searches for a suitable bride. Said pursuit — specifically his turbulent romance with the aforementioned Kate. (In Season 1, of course, it was Anthony’s younger sister Daphne (Phoebe Dynevor) and her crush Simon Basset, who met, bickered and eventually got married and fell in love. In that order.)

Motivated by a duty to uphold his family’s name, Anthony’s search for the perfect debutante are ill-fated until Kate and her younger sister Edwina (newcomer Charithra Chandran) arrive from India. When Anthony begins to court Edwina, Kate discovers the true nature of his intentions and does everything in her power to stop his and Edwina’s union.

Elsewhere, the Featheringtons must welcome the newest heir to their estate while Penelope (Nicola Coughlan) continues to juggle navigating 19th-century London and keeping her secret identity/occupation from those nearest and dearest.

Want scoop on Bridgerton, or for any other show? Email InsideLine@tvline.com and your question may be answered via Matt’s Inside Line.