Everybody has secrets to keep on The CW’s comic-book drama Naomi, and when the second installment aired this Tuesday, it became abundantly clear the title character’s parents know a lot more than they’re letting on.

Barry Watson, who costars as Naomi’s adopted dad Army Major Greg McDuffie, says his character and his wife Jennifer are lying through omission only because they’re trying to keep their daughter safe.

“He’s a little more aware than he’s pretending to be both with the military and with Naomi,” Watson reveals to TVLine. “He knows who Naomi really is but he couldn’t let her know that, and he couldn’t tell the commander when he asked him to join his special investigation team. The great thing about this show is I learn new things every week as we get the scripts. I’m getting to discover more about my character and the other characters. You just never know what they know until you do.”

Naomi is also a 16-year-old girl, and although she shares a close bond with her mom and dad, that could all fall apart once she figures out the two weren’t as forthright as they could’ve been. 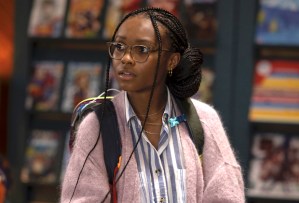 “Greg and Jen know a certain amount of things,” the real-life father of three shares. “And they have pure intentions because they love her and care about her so much that they feel like they are her protectors. As things develop, they feel like they will have to come up with more ways to protect her from the world. It’s a necessary evil as parents not to tell your children everything, but this is an especially hard struggle because eventually, Naomi will learn what they know.”

Viewers will have to keep watching to see how Naomi responds and if Greg and Jen will be able to regain her trust. Greg will likely have to stay several steps ahead of his military bosses as well.

“Lying, despite their best intentions, creates a situation where Naomi will get angry with her parents,” Watson observes. “What teenager doesn’t get mad at their parents? But because Greg and Jen are keeping secrets, it does threaten that bond. The show is so grounded in that way. As time goes on and Naomi finds out more and more, she is going to be upset with her parents. I know I would be.” 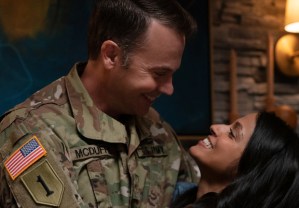 After all, it wasn’t that long ago that Watson played the eldest son on The WB/CW’s 7th Heaven. Kaci Walfall, who stars as Naomi, calls him “The CW O.G.” on set. Watson says he considers it a badge of honor.

“I’m grateful to be able to keep working in this business,” Watson surmises. “I started off playing a son, and now I’m playing a father, and it’s truly come full circle.”

How honest do you think Greg and Jen should be with Naomi, and are you worried secrets and lies will tear apart the McDuffies? Drop your thoughts in the comments.