Two pivotal events take place in the penultimate Yellowjackets of Season 1, one in each timeline. Let’s start with the identity of the survivors’ blackmailer, shall we?

NOW | It’s Shauna’s husband, Jeff. YEAH, I HAD THE SAME REACTION: This guy?! Apparently his furniture store is in real financial trouble, and he borrowed money from a loan shark but then couldn’t pay it back, so he thought he’d hit up Taissa and Natalie for some cash. Yep, it was definitely him that they chased through the glitter and everything. And how did he know about their secret? Because he read Shauna’s journals years ago. “All this time, you knew everything? And even now, after what just happened, you…,” she says, about to cry. “Shauna, of course I still love you,” he says simply. Oh, and Jeff wasn’t having an affair — the woman he met up with at the hotel was involved with the loan sharks. 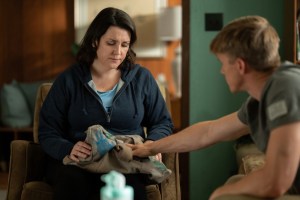 Unfortunately, Shauna learns all of this after she confronts Adam, who maintains that he doesn’t know what she’s talking about. She starts pawing through his apartment looking for evidence that he’s lying, and eventually finds two books about the plane crash. He stammers that he Googled her and was curious about her story, but that he is in no way involved in any blackmail scheme. But Shauna flashes back to various moments from her time in the woods, grabs a knife from his butcher block and shoves it into his abdomen, killing him quickly.

She alerts Tai and Natalie, who accompany her to Adam’s apartment. She lies to them that he was the blackmailer, showing him items (like the duffel bag and her journal) that she “found” at his place. They freak out about how they’re going to dispose of his body. After all, who has the skill set to handle such a thing with aplomb? Then Natalie remembers… and makes a beeline to Misty’s place. Jessica is in the middle of sweet-talking Misty into finally telling her story (“So you guys ate each other? That is what happened, right?”) when the doorbell rings. Nat apologizes to an extremely put-out Misty and calls her a real friend, but Misty wonders what she really wants. “Well, citizen detective, we need you to get rid of a body.”

THEN | In the post-crash era, it’s getting colder, and the survivors have resorted to eating worms. The girls (and guys) are aware that they’re likely to starve to death in a few weeks’ time if they’re not rescued. And when they realize that the upcoming full moon will take place roughly around the same time as their high school’s homecoming would have, they decide to have a “Doomcoming” dance. They’ll drink fermented berries that have kinda turned into booze, wear the dresses they brought to wear to the championship dinner and generally have a last hurrah before the badness truly begins. 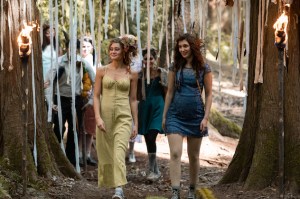 Jackie informs Shauna that she’s not going to die a virgin, so she’s going to proposition Travis at Doomcoming. When Shauna protests that Travis and Nat are a thing — though not at the moment — Jackie says, “Do you like him? Because I mean, God knows, I wouldn’t ever want us competing for the same guy.” You’ve gotta admire how, even on the verge of starvation, Jackie doubles down on the high school girl BS. Meanwhile, Misty asks Coach Ben to go to the dance with her, and he feels bad for her, so he says yes. But he quickly reminds her that the “boundaries” they’ve set will remain in place. She’s so giddy, she skips off to a Trapper Keeper she’s hidden in the forest and retrieves some ‘shrooms. God knows exactly what she’s planning to do with them; they accidentally get added to the communal stew, and though she’s surprised, she says nothing to warn her teammates about their impending consciousness-altering. 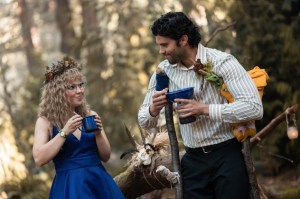 Finally, it’s time for the dance. Tai makes masks for her and Van, and they wear them so Van won’t feel self-conscious about her mauled face. Then they kiss in front of everyone, causing a cheer to come up from the small crowd. All of the girls are wearing crowns made of feathers, twigs, leaves and the like; it’s hard to think they’re pretty, though, because we know how close they are to the ones worn in the snow at the very start of the series premiere.

Eventually, the ‘shrooms kick in for everyone except Jackie, who chose not to eat. After all, she’s got an agenda: After some aggressive flirting on her part, she and Travis have sex in the cabin’s attic. He stumbles downstairs afterward and is confronted by most of the rest of the group, who feverishly declare that Jackie took something that wasn’t her. Jackie gets locked in the pantry while the girls engage in orgiastic behavior with Travis at the center. He’s into it at the beginning, but when they start using their teeth — and when he starts to hallucinate the ladies tearing his flesh away from his body — he bolts. 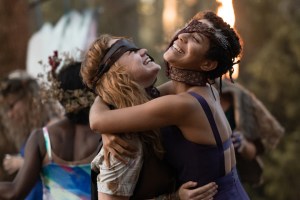 A brief moment, please, for Tai and Van, who have sex by the water. And when Tai asks to remove her girlfriend’s mask, we see that the scars aren’t that bad! (I’m no surgeon, but wasn’t HALF HER CHEEK missing? How are there just a few red lines there now?) In other news, Misty hears Coach Ben talking to Nat about love and decides to jump on top of him, declaring her own feelings. He pushes her away and yells that he’s gay. The news is not well-received.

Anyway, back to the really messed-up ish. The women, led by Lottie (who may or may not be channeling the forest’s dark energy or whatever), chase Travis like he’s a deer and they are a pack of wolves. It’s possible that they actually think he IS a deer. They’re certainly yelping and screaming as though they are apex predators. Eventually they catch him and Shauna is about to cut him open when Nat, who’d been crying to Coach Ben about how much she loves Travis, steps in in the nick of time. She’s freed Jackie in her search for Travis, and both girls wonder WTF is going on. Travis, by the way, runs off. “It’s in all of us, you know,” Lottie says ominously. “Even him, even you.” And the way she laughs manically is blood-chilling.