Warning: The following contains spoilers for the Season 5 premiere of Search Party.

Search Party has always been an oddball in the TV landscape, but with the release of its fifth and final season, things are about to get a whole lot weirder… if that can even be believed.

When we pick back up with the cultish comedy (all 10 episodes of Season 5 are now available on HBO Max), Dory (Alia Shawkat) is alive, but not particularly well. Her mental health has clearly been rocked as a result of her abduction and near-death experience last season. After she explains to her friends that she actually was dead, she rabidly recounts the “infinite love” she experienced, blabbing on incoherently about how time doesn’t exist. She even witnessed her own funeral, “and you were there, and you were there, and you were there!” she screams, going full-on Dorothy Gale. Naturally, it doesn’t take long for Drew, Elliott and Portia to deem her ready for the loony bin.

“That scene was pretty crazy,” Shawkat tells TVLine. “Say someone died and they came back. The closest thing I could connect to that was any kind of psychedelic experience I’ve had, with drugs, without drugs, whatever. It was like an incoherent trip that she’s trying to communicate, like when you’re trying to explain a crazy dream to somebody, and you’re just hopping all over the place. If you died and came back, you would seem pretty crazy trying to communicate what enlightenment means when you feel like you’ve seen all the answers.” 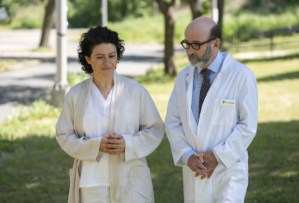 Shawkat totally sells Dory’s manic behavior, but whether it’s mental illness or actual enlightenment is up for debate.

“John Lee directed that episode, but [co-showrunners and executive producers] Charles [Rogers] and Sarah-Violet [Bliss] were always on set, too,” she adds. “I had done some preparation for that scene, and I wanted it to seem incoherent, but [she’s] also very excited to share something, [even though] you don’t even fully know what I’m saying. When we started doing it a couple times, they were like, ‘It’s funny when you switch tones really fast,’ so I was doing that a little, and then we leaned into it a lot more. One minute, I’m happy, and then everything is really serious, so they were like, ‘Ride that roller coaster. The more shifts, the funnier it is.'”

Elsewhere in the episode, Portia and Drew kickstart a fling after commiserating about their ruined lives, while Elliott gets back with Marc (Jeffery Self) and decides to adopt a child.

“There is something admirable about the way Marc and Elliot are accepting of their own kind of dysfunction,” says John Early, who plays Elliott. “I don’t recommend anyone being as toxic as Elliott in their relationships, but I do think there’s something evolved about being like, ‘I’m going to wound you viciously. That’s life, you know, so let’s just accept it now and not go through some period where we’re just smiley, smiley, smiley.'”

The two partners meet with a peculiar adoption agency bossman (John Waters), but ultimately wind up way over their heads when the child they take home is… off. (Let’s be real, he’s all sorts of scary.)

“We all know that wealthy gay who summers in Fire Island, and adopts for the aesthetics of it,” says Early. “It’s a classic Search Party example of Elliott’s need for more power and success, and he’s immediately paying for it by getting this genetically engineered bad seed of a child.” (Hear what Early had to say about working with Waters here.) 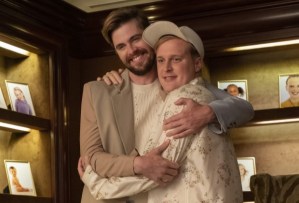 As for the series’ motley crew of frenemies, it’s both surprising and entirely believable that they’re continuously drawn back to each other, especially considering the heaps of lies Dory has spun throughout the years.

“As much as they would like to fancy themselves as people capable of moving on and assimilating back into the real world, they can’t,” notes Early. “They’re so marked by their experiences that they’ll always come back to each other. And that is where the show gets its tiny little shred of tenderness. After what they’ve been through, they just make the most sense together, which is actually kind of universal in a way. Not everyone has buried a body with a group of people, but I think everyone can relate to oddly feeling most comfortable around some of the more dysfunctional relationships in your life.”

“They’re definitely trauma-bonded from having killed somebody together, and then trying to hide it,” adds Shawkat. “You’re so close to the friends you make in your 20s, and you’re still attached to them even if they’re terrible. And Dory is a mystifying kind of person. There’s something intoxicating about her. They’ve built this weird kind of family, and there’s something really comforting in feeling accepted in that group.”

Happy to return to the Party? Grade the premiere below, then sound off in the Comments.