Search Party is renowned for its zaniness and larger-than-life guest stars, so it’s only natural that its upcoming invitees are of the highest caliber: the legendary John Waters and ever-enigmatic Jeff Goldblum.

In its forthcoming final season (all 10 episodes drop on HBO Max Friday, Jan. 7), Dory may be alive, but she’s heading straight for another terrifying journey when she joins a flamboyant tech billionaire named Tunnel Quinn (Goldblum) on a philanthropic endeavor sparked by her near-death experience. (And let’s just say Goldblum is at his absolute Goldblum-iest.)

“Tunnel Quinn sees Dory as an opportunity to make money,” Alia Shawkat, Dory’s portrayer, tells TVLine. “He steps in at a perfect moment to help Dory and her cause. She wants to get her message out to as many people as possible, and once he gets involved, they try and make a pill for enlightenment.”

With the help of social media influencers and their large followings, Quinn and Dory make it their mission to try to heal the world. “But you’ll soon see that both of their intentions are different,” Shawkat teases.

Goldblum was “a performer, through and through,” the actress notes, adding that Goldblum would often sing his way to set, and wear a lot of his own clothes while in character.

“Jeff Goldblum is the only person who could play this part so gracefully and so funny,” she says. “I don’t think he had seen the show before we offered him the part. Then he watched a couple of seasons and loved it so much, and was so congratulatory towards us and supportive. He was just so game, and always such a professional.”

And then there’s Waters (Hairspray), who joins as the head of an adoption agency helping Elliott (John Early) and his boyfriend find a child. Early is quick to point out that Waters is “a giant hero of mine.” The actor even has an Odorama scratch-and-sniff card from Waters’ 1981 film Polyester framed. 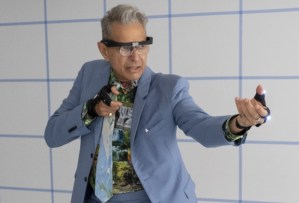 “My sensibility and worldview would not exist without him and his influence on all of the people that influenced me,” Early says. “The teeth and volume of Search Party, I feel, is very much in working in his tradition.”

Series creators and executive producers Sarah-Violet Bliss and Charles Rogers had been in contact with Waters ever since a 2014 screening of their feature film Fort Tilden. Waters gave them a business card, and Rogers fired off “too many emails” throughout the years asking Waters to watch and possibly guest-star in Search Party.

“Knowing this was the last season, it was a last-ditch effort to try and get him in the show,” says Rogers. “He was so cool, and everything you hope he is. It was really hard to talk to him because he’s too big of an idol for me. His character is a representative of a chic and cutting edge genetics firm that creates the perfect child for wealthy gay couples. There’s a satirical element to the kind of soulless affluence that’s attracted to this company.”

“It was very big,” Early adds. “Charles and I were very overcome and touched by the whole experience, and socially fumbling the whole time. I was an idiot. I blew it! But he was so lovely, and exactly how he is in his Christmas shows and interviews. He was so forthcoming with all of his genius anecdotes.”

Early was beyond impressed with Waters’ acting chops, too: “He was so memorized, and so comedically sharp. It was totally surreal to be across from him. At one point, I was like, ‘He’s channeling [Waters’ frequent collaborator] Divine.’ What he was actually doing was that kind of sensibility they developed together, but I was like, ‘Divine’s in the room. I’m in the room.’ It was really cool.”