It’s been over two years since host Phil Keoghan crowned the last champions of The Amazing Race. But on Wednesday, the globe-trotting series finally returned to CBS with its Season 33 premiere, and boy, were these racers READY.

In the first minutes, Keoghan explains via intro that the premiere episodes were filmed before the COVID-19 pandemic struck, and that production was suspended at the end of the third leg. But as always, the world is waiting for us (and so is the new season), so let’s dive in and recap what the cast got into prior to the world’s shutdown.

The racers jet-set to London where the first two legs take place. (Aside: We have to admit, seeing their mask-less, excited faces has us feeling some kind of way.)

Contestants include Anthony Sadler and Spencer Stone, who made headlines in 2015 after taking down a terrorist on a Paris-bound train; Akbar Cook Sr. and his wife Sheridan, educators from New Jersey; and best friends Dusty Harris and Ryan Ferguson, the latter of whom was wrongly convicted for murder and spent a decade behind bars. (Meet the rest of the racers here.)

Their first stop: Trafalgar Square, where the first clue directs them to Buckingham Palace.

DETOUR | In Artist Den, teams must paste up a piece of original artwork, just like a true Banksy. In DigiBen, players must run around searching for three different Bens around Parliament Square. It doesn’t take long for players to get surprisingly lost (in an English-speaking country, mind you!), and unable to find the clue, Connie and Sam quickly fall into last place. 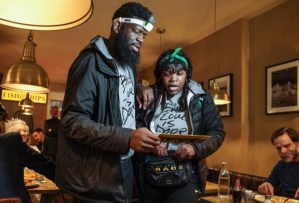 It takes some teams a hot second to figure out what a “bobby” is in England (a policeman), while the artists of the group realize they have to complete a puzzle before sticking the artwork to the wall. Meanwhile, Akbar and Sheridan win the trophy for the first duo to start bickering — congrats, you guys!

Anthony and Spencer are the first to get to DigiBen, while Sam won’t stop giving us his best Whitney Houston impression. (Bobby! But no, seriously, please stop.) Then Michael and Moe don’t realize their puzzle is a puzzle, and they slap every single square on the wall haphazardly. Yikes!

Ryan and Dusty, and Anthony and Spencer soon find their final clue, which directs them to the season’s first finish line: The Natural History Museum. The last team to check in here will be eliminated, Phil says.

PIT STOP | Anthony and Spencer arrive first, winning a trip for two to Turks and Caicos! Dusty and Ryan, and Raquel and Cayla round out the Top 3, but it’s the end of the road for Michael and Moe, who are the last to find Phil at the museum.

The next day, teams head to Mail Rail to receive their first clue, which directs them to their first…

ROAD BLOCK | Players take a ride on the city’s mail train and must sort through thousands of envelopes to find their next clue. Ryan is first to begin the hunt, and when he finds what he’s looking for, he’s on the first train back before the second team even arrives. Raquel is next to the task, and she finds her clue so fast, she leaves Anthony in her dust.

Ray and Penn then make a mind-numbingly absurd decision. They find the clue, but since it was “too easy,” they don’t get back on the train. Instead, they stay to study the names and stamps on the envelopes! (Mind. Blown.) Their hesitation gives Anthony a solo trip back to his partner. “I am a chronic overthinker,” Penn tells us. Ya think?

At Leicester Square, the teams find the location of their next marker. 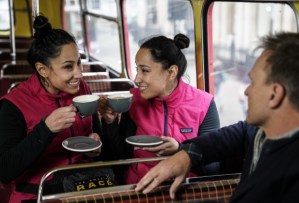 DETOUR | In Bullseye, Mate, players must both hit a bullseye in the same round of darts. Or teams can choose Decorate, where they must doll up two cakes to match country flags. Dusty and Ryan grab the darts (and some pints), while the flight attendants head to the bakery with Anthony and Spencer. The tricky part of the baking task is that the teams must replicate two of the cakes using only flags that are in the EU. Of course, the table is adorned with a whooole lotta cakes for them to potentially flub.

Most teams know that France is in the EU, but Raquel and Cayla, and Anthony and Spencer botch their second cake.

At the other task, Ryan and Dusty successfully nail two bullseyes. Connie and Natalia both struggle with the darts (must be all of those tasty English ales), but Connie and Sam ultimately pull it together before the daddy/daughter duo. The last two teams racing to avoid elimination are twins Lulu and Lala, and marrieds Taylor and Isaiah.

PIT STOP | Phil’s lurking inside a double-decker bus parked near Russell Square Metro Station. Ryan and Dusty take the win, with Connie and Sam in second place, and Arun and Natalia snagging third. Lulu and Lala arrive in last, but are luckily told to continue racing.

How’d you enjoy the premiere, and which teams are you rooting for? Vote in our poll below, then light up the Comments.