THE PERFORMANCE | With its early episodes, Station Eleven left a big narrative hole to fill: What happened to young Kirsten between the time that she and accidental guardian Jeevan arrived at “Uncle” Frank’s doorstep and the afternoon that the duo fled the apartment to brave the wintry, post-pandemic Chicago wild?

This week’s second episode sent adult Kirsten, in a fugue state after being shot by a Red Bandana with a poison dart, back to that apartment, alongside her younger self, where she revisited anew — and we got a first look at — all that transpired during those first months of isolation. And as vignette after vignette played out, Davis conveyed Kirsten’s reactions to moments all too familiar, and a few even new to her.

To be clear, there were some light, happier moments, such as when Kirsten watched her younger self begin to bond with Frank over their regard for the Station Eleven comic book and even the tale of how he injured his leg in a Sri Lanka war zone. Or when, provided with the antidote to the poisonous dart and invited to “leave,” adult Kirsten instead chose to “stay a little.”

But there were also the darker moments — where Kirsten as an adult surely was a more keen witness to Jeevan’s discovery of Frank’s heroin habit, and when she came to realize that Jeevan had been talking to “Siya” (himself) longer than she ever knew. But most devastatingly, there was the time she urged her younger self to bail on a dream, knowing what tragic event lurked just around the corner. “Don’t write the play,” she said, Davis conveying a perfectly measured amount of urgency. “You leave one day too late.”

Alas, the play was completed, and acted out — just ahead of the arrival of an intruder who very clearly meant harm. Here, Kirsten as an adult saw firsthand all that unfolded, as a despondent Frank effectively ended his life by charging the knife-wielding stranger, and then how Jeevan killed the intruder in kind. Kirsten then curled up alongside her hiding, sobbing, younger self (played so well by Matilda Lawler) to reassure, “This isn’t your fault, This is just… what… happened.” With the pacing of those few words, Davis drove home how important they were for both Kirstens to hear. 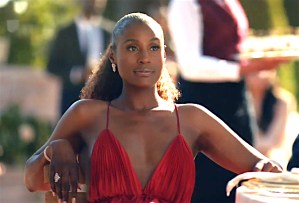 HONORABLE MENTION | To be clear, Insecure star Issa Rae bodied every one of her scenes in the beloved HBO rom-com’s series finale. From her eponymous character’s sober, mascara-smeared acceptance of Nathan breaking up with her to the stunned way she slowly but happily backed off after celebrating Kelli’s pregnancy news sans Molly, the Emmy-nominated comedic actress left no emotional stone unturned. The portrayer’s resolute and romantic understanding of Lawrence as the fictional Issa’s soulmate also bolstered her posture as she declared no one was “doubting me except for me.” Rae’s ability to make us cry while helping Molly out of her wedding dress, however, stands out because her alter ego tearfully muttered “I love you, too,” but said so much more through the bittersweet mix of joy and loss that graced her face. Although marital bliss meant less time for the besties, their heartfelt hug and episode-ending chat assured us all that their loving friendship would last forever. 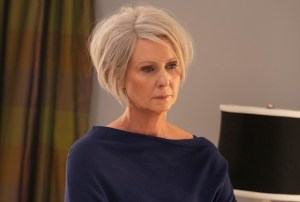 HONORABLE MENTION | Cynthia Nixon was always terrific as Sex and the City‘s sarcastic lawyer Miranda Hobbes, and she conjured up that old magic this week on HBO Max’s revival And Just Like That… with a throwback performance that also took her character in a radically new direction. Nixon brought a fresh light to Miranda’s eyes as she fell under the spell of charismatic comedian Che — and indulged in a steamy kitchen tryst. But it was when Carrie confronted Miranda about the affair that Nixon truly shined, letting years of pent-up frustrations come pouring out in a messy, tearful confession: “I’m unhappy… I’m trapped. I hate my marriage. I hate it. I hate my life. I hate it.” (She almost couldn’t catch her breath, as if she had run an emotional marathon.) It was the kind of boldly vulnerable work that Nixon specialized in on Sex and the City, and she skillfully slipped back into it here like a favorite pair of vintage heels. 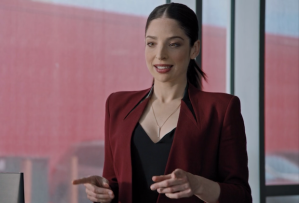 HONORABLE MENTION | We always get a bit nervous when a familiar face shows up in Letterkenny‘s very odd world — like, how can any straight-arrow actor make their mark? But Anna Hopkins (who is also doing fine dramatic work in The Expanse‘s farewell run) rose to the occasion in Season 10’s second outing and made car salesman Lisa such a specific character. Whether “McMirroring” McMurray’s body language (so as to establish a rapport), peppering us with BANT, FAB, “sales funnel” and other slang, or beckoning with a certain distaste for her assistant, Lisa proved to be a highly entertaining and formidable foil for Wayne and McMurray — until prospective buyer Marie-Fred craftily revealed herself to have the ultimate leverage. Touché!