When Issa Rae talks about creating Insecure‘s resident riddler, Thug Yoda, she says the loving father and Blood was inspired by a similar man she once saw at the post office, who was cursing into his phone one minute and doting on his young daughter the next.

Tristen J. Winger, who enjoyed playing the character for five seasons right up to the montage in one of the HBO comedy’s series finale closing scenes, says Thug Yoda’s honesty is what he and fans admired most about him.

“His ability to just be transparent and to be himself is what people loved,” Winger tells TVLine. “Insecure authentically and unapologetically represented and celebrated South Central L.A., and there is a parallel between that and Thug Yoda. He never sugarcoated anything. He never tried to harm anyone. He just wanted to share his thoughts and replace the C’s in words with B’s.”

That’s why Thug Yoda’s meta appearance with his now preteen daughter Nala in the finale meant so much, Winger adds. Without saying a word, The Dunes resident celebrated his favorite things — his child, his neighborhood and his city. Winger reveals that when he got to set that day, unit director and series editor Mark Sadlek let him freestyle the scene, so he pulled out his phone and took pics in front of the now iconic sign just like real people do all the time. 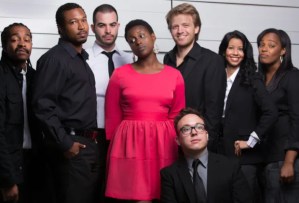 It’s a freedom that Winger, who attended King/Drew Magnet High School with Rae in South Los Angeles, says he has enjoyed with the comedic actress ever since their  Misadventures of Awkward Black Girl days. He can also be heard on the Insecure parody podcast We Stay Looking.

“The last half of Thug Yoda’s lines at the block party in Season 4 were improvised,” Winger recalls. “I love playing with Issa. When she says something, even though I know the script, I also know it’s time to play. We did five different takes, and that was the one that made it.”

“I’m from South Central L.A., and the fact that Insecure tells our stories matters,” Winger explains. “We all have stories to tell, and this isn’t the only one that takes place off Crenshaw. There are teachers and business owners who live there, and their stories aren’t centered in Silver Lake and West Hollywood. My hope is that because of the success of Insecure, more of our stories will get told.” 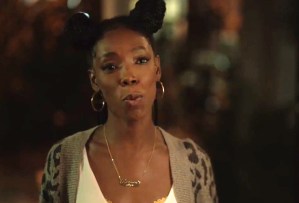 Elle Lorraine played Trina, Issa’s neighbor when she moved out of The Dunes, and a tenant who comically and constantly harassed Issa about maintenance issues. Lorraine, whose character made her farewell appearance in the final season’s seventh episode, says she’s proud she got to be a part of the cultural impact Insecure made and the way it captured the voices of all kinds of Black folks.

“People who don’t understand the Black experience got a peek at how multifaceted we all are,” Lorraine observes. “We are intelligent, we are funny, we are sexy and romantic and clever. There is a butterfly effect that Insecure created, and now a lot more stars, creators and narratives are going to come from this show.”

Were you excited to see Thug Yoda and Trina in Insecure‘s final season? Drop your thoughts and favorite character moments in the comments.