It started off as a matchmaking game. Tyler Perry, the executive producer, director and writer behind BET’s soapy hit Sistas, said the women on his producing team thought it would be “fun” to set up the drama’s single stars — KJ Smith, Ebony Obsidian, Mignon and Crystal Hayslett — with eligible men they vetted in real life on last week’s The Tyler Perry Show: Sistas After-Show Edition.

The fact that the now-engaged Smith was dating her fiancé Skyh Alvester Black (who plays Jacobi on the show) mattered little to the host, who winked as he asked her and any of the others who are in relationships to “play along.”

That’s when he had former NFL player Sean Walker stand up and holler at Smith. Walker, who appeared a little nervous, smiled sheepishly as the audience cheered, and he complimented Smith’s “contagious smile.”

A sweet talker named Jamal followed soon after and said he looked forward to admiring Mignon’s intellect as much as he did her beauty. And John, a Nigerian-American pharmacy tech, showed Obsidian his six-pack abs, and she walked offstage to chat and get a closer look.

Last but not least was Hayslett, whose perfect match Jerrod said he’d fallen for her while watching Sistas and added that his chocolate skin would pair nicely with her butter-pecan complexion. This made Hayslett giggle. 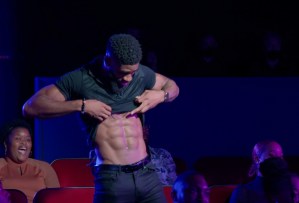 By the end of the segment, Perry, who was visibly pleased with his and his producers’ romantic handiwork declared, “You know what? I gotta start a Black Bachelor. I totally have to do that.”

Although one could assume that Perry was just joking around, no betting person should ever underestimate his ability to grab attention and create shows out of thin air. The prolific owner of Tyler Perry Studios in Atlanta currently has eight shows on cable and the BET+ streaming network, with a ninth one — the Sistas spinoff Tyler Perry’s Zatima — in the works.

Couple that with some Black viewers’ long-simmering disdain for ABC’s Bachelor franchise, which has had only one Black male lead and just celebrated its first Black couple after 18 seasons of The Bachelorette, and Perry’s proposal for a matchmaking show aimed at African American audiences could be a welcome addition.

What do you think about Perry creating a romantic reality show that centers Black people? Would you watch it? Drop your thoughts in the comments.