Michelle Young isn’t the first Black Bachelorette. But after 18 seasons, she is the ABC reality show’s first leading lady to have two Black/biracial men as her final contenders.

While this is an overdue shift for a television franchise that has and continues to struggle with race, inclusion and diversity, as Young has said many times before, it matters more that her choices reflect a whole world full of people who look like her and finalists Nayte Olukoya and Brandon Jones.

Young has also stated in multiple interviews that she didn’t set out to make history. Instead, she chose the men with whom she had the strongest connections, and when she chooses the man she wants to spend the rest of her life with on Tuesday 8/7c, he will be Black or biracial.

That said, Young’s choices are comforting to some Black viewers who had begun to question if The Bachelor and its sister show, The Bachelorette, purposely created scenarios where the strongest romantic contenders for the shows’ only Black leads — Rachel Lindsay, Tayshia Adams and Matt James — were not Black.

Intentional or not, it definitely sends a message that Black romantic leads are only viable and audience-worthy if they pick someone who doesn’t share their heritage, while the franchise’s white stars get to choose white mates all the time because they have a larger pool from which to choose. That kind of consistent and hard-to-ignore messaging can diminish the cultural identity of people who watch and want to see love between two people who share racial and cultural experiences and backgrounds. 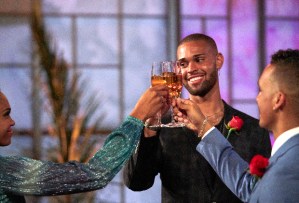 Young’s heartbreakingly sweet poem about all too often feeling like a “token Black girl” growing up in a predominately white Minneapolis suburb said as much and included a line about being, “the girl picked last for prom but the first for basketball.”

Meanwhile, Olukoya celebrated the show’s historical act of inclusion back when he was one of Young’s final four Black/biracial suitors.

“I know this isn’t some earth-shattering historic event,” he wrote in an Instagram post. “But I can’t help but think about my experience of growing up in Canada. I grew up in a predominantly white neighborhood, went to predominately white schools, and was raised by my Mom and her side of the family. I didn’t see many people who looked like me. And when I did, it was mainly on TV. And many of us know how people who look like me tend to be portrayed on TV.” 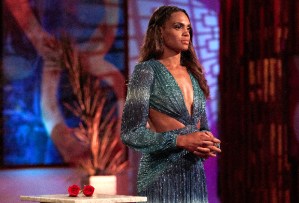 Say what you will about this being some silly reality show, but no one wants to just be tolerated when it comes to romance. And love is an emotion and a verb that everyone, regardless of their race and ethnic background, should be able to cherish and enjoy.

It’s just nice to see that the producers behind The Bachelorette finally got the memo on that, too.

What do you think of Michelle and her potential soulmates Nayte and Brandon? Does it matter that they are all Black/biracial, or is it not a big deal? Drop your thoughts in the comments.