A wise man — nay, a legendary man — once told Ted Evelyn Mosby that you shouldn’t even think about getting married until you’re 30. Well, it just so happens that Hilary Duff‘s Sophie is turning the big 3-0 in TVLine’s exclusive first look at an upcoming episode of How I Met Your Father.

Premiering Tuesday, Jan. 18, the How I Met Your Mother offshoot takes place in the near future, as Sophie tells her son the story of — you guessed it! — how she met his father. Whereas Bob Saget in his former role as HIMYM narrator was never seen on screen, HIMYF narrator Kim Cattrall appears in the flesh as the older version of Sophie, setting the sequel series apart from its predecessor.

A second photo, meanwhile, offers a closer look at Sophie and Valentina’s apartment, which is decorated for Sophie’s birthday. Sophie walks in and is seemingly surprised by what she finds: Charlie and Ellen in the midst of a drinking game, as Jesse and Valentina cheer them on from the sidelines. 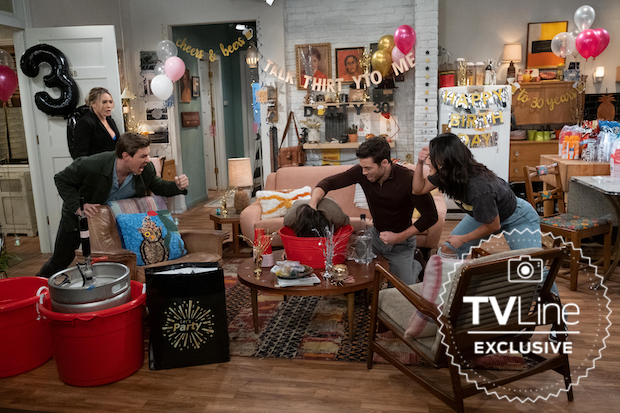 Per Hulu, How I Met Your Father “catapults us back to the year 2022, where Sophie and her close-knit group of friends are in the midst of figuring out who they are, what they want out of life, and how to fall in love in the age of dating apps and limitless options,” according to the official logline. The series hails from Isaac Aptaker and Elizabeth Berger (Love, Victor), and counts HIMYM creators Carter Bays and Craig Thomas as executive producers. Original series director Pam Fryman is also on board as an EP, and directed the series’ pilot.