Long before John Dutton ever presided over Yellowstone‘s titular ranch, his ancestor James Dutton risked everything to settle his family in the wilds of the American west. 1883, the Yellowstone prequel that premiered Sunday on Paramount+, is that Dutton’s story.

As we kick off the Episode 1 recap, though, it seems like 1883 might actually be the story of Elsa Dutton (played by Alexa & Katie‘s Isabel May), James’ teenage daughter, whose voiceover starts and ends the episode. When we meet Elsa, she appears to be coming back to consciousness after getting knocked out. Flames flicker nearby. She narrates that she’s in the American Great Plains, a place that “must be witnessed to be understood. And yet, I’ve seen it and understand it even less than before I first cast eyes on this place.” She’s crying; things in her immediate vicinity are definitely not OK as she says that she’s in Hell, “and there are demons everywhere.” 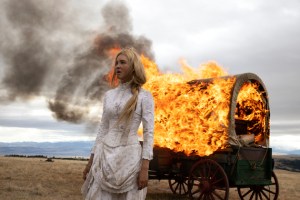 As she gets to her feet, we see that a nearby covered wagon is on fire, and people who appear to be Native Americans are shooting arrows into a group of white people as they flee. Elsa runs to the fallen body of a man and digs for his gun, but she’s brought up short when a Native American man on horseback threatens to take her down if she doesn’t drop the weapon. Given that her prospects (getting sold) aren’t great if she does what he says, she shoots him… at the exact moment he shoots her. But an arrow through the torso doesn’t stop her, and a furious Elsa lurches around the field, shooting at the men on horseback. In her voiceover, she wonders if she’s become a demon, too.

Let’s leave Elsa for a moment and go back a bit, to a white-haired (and moustached) man who’s sobbing on his front porch in the middle of nowhere. His wife and teen daughter have just died of smallpox. Bereft, he carries his daughter’s body up to where his wife’s body lies in bed, then he goes back outside and lights the place on fire. He’s sitting in the grass, considering killing himself with a pistol, when a man approaches and calls him “Captain.” The other man doesn’t seem worried that the grieving husband/father is really going to shoot himself, and in the end, the widower — whose name we will learn is Shea Brennan (Sam Elliott, The Ranch) — doesn’t. 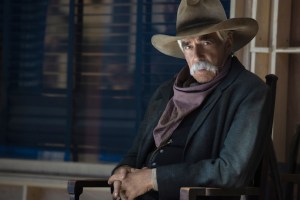 Shea and his associate, Thomas (LaMonica Garrett, Arrow), are on their way to Fort Worth, Texas (aka “Hell’s Half Acre”) when they witness a man driving a covered wagon and singlehandedly fending off a group of robbers. He manages to shoot every last one of them, and he’s curt when Shea and Thomas say a passing hello, but he vomits in the aftermath of the ordeal: Killing, it seems, doesn’t come naturally to him.

Which isn’t to say that he’s not good at it. The man turns out to be James Dutton (Tim McGraw, country star and Friday Night Lights film alum), who also turns up in Fort Worth to prepare for a reunion with his family members, whose train from Tennessee should arrive soon. Dutton isn’t in town five minutes when he shoots down a pickpocket who palmed his wallet; though Dutton’s bullet doesn’t outright kill the petty thief, the lawless community’s residents soon do. There’s so much violence in such short succession that the point is made: Fort Worth is a bad place to be. Or, as a local merchant warns James: “You pull your pistol in this town, mister, you better know how to use it.”

The rest of the Duttons, including Elsa, arrive soon after. There’s Margaret, James’ wife (Faith Hill, country star and McGraw’s real-life missus); their young son, John; Elsa’s aunt, Claire; and her teenage daughter. Claire is a severe woman who thinks that Elsa is too sassy to her mother. (In fairness, she’s a little sassy to her mother.) James is overjoyed to see his family as they descend from the train, and he ferries them to the hotel where he’s booked a group of rooms.

James and Margaret spend some sudsy, sexy alone time in their room’s bathtub — a luxury that James had to fill by carting buckets of hot water up from the lobby. Elsa and John share a room; after her little brother goes to sleep, she looks out the window and, with wonder, witnesses a woman and man having sex in the alley.

Later that night, though, things get terrible. A very drunk man mistakenly blunders his way into Elsa and John’s room. When he realizes there’s a woman in his bed, he immediately starts to assault her. She fights back enough for John to run for their parents. And as the man climbs on top of her, his intent clear, James shoots him dead from behind and screams that anyone else who preys on his family will meet the same fate. 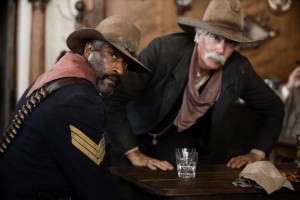 Meanwhile, Shea and Thomas are preparing to shepherd a group of German immigrants to Oregon. But the newcomers have very little English and even fewer survival skills, not to mention their lack of horses. Though he’d turned them down the first time when they asked him to join the journey, James finds Shea and Thomas and says he and his family will ride with them — but he’s not working for them. It’s more of a strength-in-numbers thing. So they scan all of the Germans for smallpox (a man and his wife have it, and they are ejected from the group and told to go lie down by the river and await death — harsh!), then the trip gets underway the next morning.