Legacies closed out its 2021 run on Thursday with its body-swappiest, double-crossiest episode yet. And by the end of the hour, the Super Squad was down one very magical member.

Let’s start with Lizzie, who was practically ready to throw herself a parade after tracking down Hope… until she found out she actually snared Aurora. Still, Lizzie wasn’t about to let a good opportunity go to waste, so she tried to form an alliance with the enemy of her enemy. After all, they both suffered at the hands of a Mikaelson, even if Hope stealing Lizzie’s butterfly clips wasn’t as cruel as Klaus stuffing Aurora behind a brick wall.

In exchange for Lizzie’s protection, Aurora revealed a special coffin capable of containing a god. (“If monsters are real, why not divine beings?”) She planned on using it to capture Hope and give her the ol’ drowning-forever-in-the-ocean routine. I’d be lying if the whole thing didn’t have me feeling a little nostalgic for Stefan’s summer in the quarry.

Lizzie, on the other hand, wasn’t in the mood for such a biblical approach. So she sealed Aurora in the coffin, then summoned the real Hope for a final showdown. Stake in hand, Lizzie cast a spell to make Hope look more like herself, thinking it would be easier to look into the eyes of the person who has caused her so much pain.

Unfortunately, that plan backfired big time. “I hate that I have to be the one to do this because no one else will,” Lizzie said, beginning to tremble. “But most of all, I hate you for being my friend and for being part of my weird messed up family and for making me love you, Hope Mikaelson. No matter how far you go, how evil you become, apparently I can’t be the one to stop you.” And just like that, Hope’s humanity was back on.

Just kidding! As soon as Lizzie helped Hope return to her original (teehee) body, she proved Aurora right: “Once a Mikaelson, always a Mikaelson.” Not only was she lying about her humanity being back on, but she also accepted Lizzie’s challenge that she would never kill her. With one snap of her neck, Josie’s twin was left lifeless on the floor of Aurora’s creepy basement.

But. Wait. After appearing in a vision to Josie, promising that she had a back-up plan in case things went south, Lizzie rose from the floor and revealed that she’s now — I can’t believe I’m even typing these words — a heretic! This transition truly caught me by surprise, not unlike the time Lizzie’s mother transitioned all those years ago. We do love a full-circle moment. 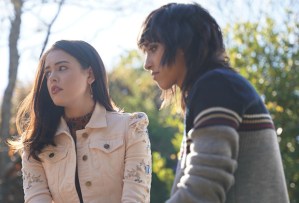 GOODBYE FOR NOW | Back at the Salvatore School, Josie was walking on eggshells, trying to find the right way to tell Finch about her decision to leave town. “You wanted someone who loves you enough to stay and fight, even if it’s a lost cause,” Finch reminded her when she finally came clean. But Josie had no intention of leaving Finch behind, revealing that she actually bought two one-way bus tickets.

Finch insisted that Josie wasn’t forcing her to tag along, promising, “The person I want to be with is you, so how could I say no?” Unfortunately, saying no ended up as Finch’s only option after Jed became incapacitated, inspiring her to step up as the pack’s new alpha.

Heartbroken but confident in their next steps, Josie and Finch said their goodbyes, agreeing to “see where they are” when Josie eventually returns. (Off-screen, it’s a slightly different story, as this episode indeed marked Kaylee Bryant’s final hour as a series regular. Click here to read our exclusive statement from the actress.) 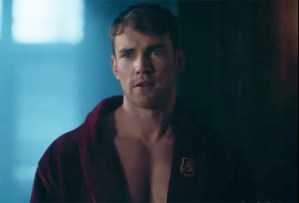 * Is Ethan officially on the outs with the Super Squad? After coming clean about helping Lizzie with the stake, and about wanting her to choose him, MG was furious. “You don’t deserve to be here,” MG told him. “Get out!” Yikes. I mean, deserved, but still yikes.

* The mysterious, self-regenerating stranger that Jed and Kaleb “saved” from the argus turned out to be… well, I’m not sure yet. But he’s super hot, and I’m pretty sure he might be a god. After all, the promo for Legacies‘ Jan. 27 return sees him asking Jed, “Do you know what separates men from gods?”

* Landon, Alaric and Ted are still stuck in purgatory. Still collecting those coins. Honestly, I’m starting to feel like I’m stuck there at this point. Can we get these guys up to the surface already? They’re missing out on a lot!

* Desperate for some good news right about now? OK, Cleo and Kaleb are officially boyfriend and girlfriend! Yay!

So… yeah, we have a lot to discuss. Josie’s exit, Finch’s promotion, this new god-like hottie, Kaleb and Cleo making things official, Lizzie becoming a freaking heretic. Grade this insanely game-changing episode below, then drop a comment with your thoughts on absolutely everything.