One of the Salvatore School’s most beloved students is putting Mystic Falls in her rearview.

TVD, Originals and Legacies: 26 Actors Who Crossed Between Shows

The Dec. 16 episode of The CW’s Legacies marked Kaylee Bryant‘s final appearance as a series regular, TVLine has learned exclusively. Bryant has portrayed Josie Saltzman since the Vampire Diaries/Originals offshoot premiered in October 2018.

“As a fan of The Vampire Diaries universe myself, thank you to The CW and Warner Bros. TV for giving me this opportunity,” Bryant says in a statement obtained by TVLine. “I am so grateful to the fans and will love them always and forever for welcoming and accepting me into this world. Josie has helped so many beautiful humans feel comfortable in their sexuality, and I hope her legacy lives on so that one day everyone feels free to love whoever they want regardless of gender.”

But is this really the last we’ll see of Josie? That answer can be found (to an extent) in the statement we obtained from executive producers Julie Plec and Brett Matthews: “While it’s heartbreaking to say goodbye to such a beloved Super Squad member, we wish Kaylee happiness and success. We look forward to watching her career grow in the future, and our door at Legacies will always be open to her, because the world is simply a better place with Josie Saltzman in it.” 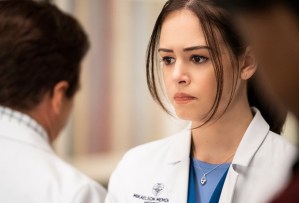 While Bryant will be sorely missed, Josie’s storyline has been heading in this direction for quite some time. She already tried distancing herself from the Salvatore School by enrolling at Mystic Falls High, temporarily moving in with her Uncle Damon and Aunt Elena. She eventually returned to the supernatural academy, but her latest stint has been a tumultuous one.

During last week’s Grey’s Anatomy-themed vision quest, Josie came to an important realization about her future: “I have the need to live up to this school that was literally created for me, and the pressure to save the school and my friends means I will never live a life of my own.”

Josie followed that up this week by purchasing a one-way bus ticket out of town. Josie believes that there’s still good in Hope, but she can’t help her as long as she stays in a toxic environment like the Salvatore School. Unfortunately, saying goodbye to Mystic Falls also meant saying goodbye to her girlfriend. “When I come back, we can see where you and I are,” Josie told Finch after their emotional final scene together.

Your thoughts on Bryant’s departure from the show? Drop ’em in a comment below.