Thursday was anything but a silent night on Grey’s Anatomy. In the ABC drama’s winter finale, which promos promised would leave us “on the edge,” Farouk’s life hung in the balance, as it turned out did Owen’s as he tried to get his nephew a donor heart. Did they pull through? Did we even find out? The below recap has the answers to those questions and more…

2021 in Review: 29 of Our Favorite Scene Stealers From WandaVision, Grey's Anatomy, Ted Lasso and More 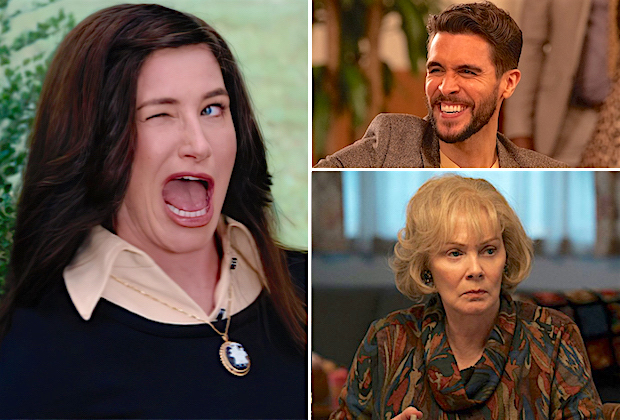 ‘WE ARE DOING OUR BEST IN A WORLD OF UNCERTAINTY’ | As “It Came Upon a Midnight Clear” began, while I finished sniffling over a particularly moving Station 19, our regulars decked the halls, and Link announced to Jo that he was immediately heading to Minnesota to tell Amelia that he loved her and wanted to be with her, no wedding necessary. Meanwhile, Amelia was welcoming David and Kai to Grey Sloan, where they’d be taking a big step forward in their super-secret attempt to cure Parkinson’s. Running into Cormac, Mer surmised that he was having a hard time, what with it being the holidays and him and his boys missing his late wife an extra lot. By and by, she told him about her COVID dream and how it had made her feel like Derek was still with her and maybe always had been. So perhaps Cormac’s wife was kinda-sorta still with him, too. With that, he gave her the look that had made us initially Mermac fans. Nearby, Bailey and Ben struggled to figure out when they could consult a lawyer about fighting for Pru — busy schedules and all. He also hoped they could do some celebrating as a family, what with Christmas having been Dean’s favorite holiday. When Ben met his wife’s superfan Jordan, he cracked that she still had it. And indeed, she did. Was there ever any doubt? 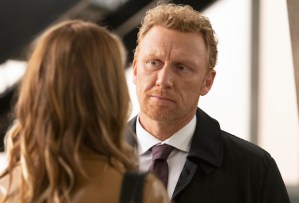 Checking on Megan, Cormac suggested that she take a walk… or a nap. “If he doesn’t make it, neither do I,” she said plainly. She wasn’t interested in surviving another chapter of earth-shattering pain. She apologized for saying that to Cormac but couldn’t have confided in Owen or Teddy. “I’m just not willing to survive this.” Seconds later, Winston reported that they’d found an organ donor for Farouk. Poor Megan was really on an emotional roller coaster. From there, Owen, Teddy and Cormac took off for Tacoma to retrieve the heart. En route, Hayes tried to reveal to Hunt and Altman that Megan was more than just worried and sad. “She is profoundly depressed,” he attempted to emphasize. After collecting the heart, Owen and Teddy wanted to celebrate while Cormac doubled down on trying to explain that Megan was in crisis. Just then, they were all thrown into crisis when their driver had a massive stroke, and the organ-mobile started doing vehicular tumblesets!

Post-accident, Owen, Teddy and Cormac all seemed to be fine. But they were trapped in the car with the dead driver and desperate to get the heart to Grey Sloan and Farouk. Oh dear… the vehicle was on the edge of a cliff, being held in place (barely) by a tree. One false move, and it was curtains for all of them. As Farouk was wheeled into the O.R., Winston encouraged Megan to sit this one out; she’d stay behind with her mom. Back at the site of the accident, the doctors fought to find a way to get the heart to Farouk before it ceased to be viable. But when Cormac smashed a window and tried to get out… ack! The whole vehicle slid ever closer to the edge! “All we can do is try to stay alive” till help arrives, Owen said. No, insisted Teddy, they could also try to keep the heart viable. She should climb out, Owen said. No, she argued. Cormac’s kids had already lost their mother — he should go. Just then, they realized that the car was pulling the tree out of the ground. 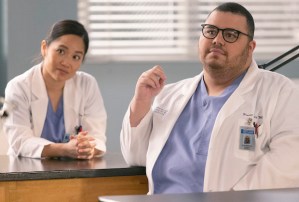 ‘I SWEAR PART OF BEING AN OB IS JUST TORTURING WOMEN’ | When Jo arrived at Grey Sloan, she was surprised to bump into Amelia. How is Link doing? his ex wanted to know. Er, fine, Jo said. Left alone, she choked down her burgeoning feelings for her BFF and called Link to tell him that Amelia wasn’t in Minnesota and he should turn around and return to Grey Sloan. When he arrived, he practiced what he was going to say to Amelia… on Jo. “I love you now, and I have always loved you,” he said, “so let’s be together right now.” Would that work? “It’s perfect,” sighed Jo, as smitten as crestfallen. Before he could say anything to Amelia, though, she shared a spectacular first kiss with Kai that… aww… Link witnessed. 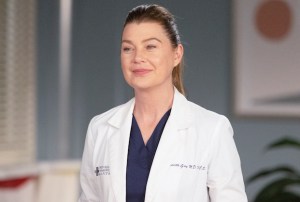 ‘I HOPE I DON’T DIE TODAY’ | Worried that anything could happen in the O.R., David told Mer that he’d left “just in case” notes for his loved ones. He also apologized to Mer for being such a jerk to her. He was, in fact, very grateful and hoped those notes reminded her that some people liked him, even if she wasn’t one of them. Before drilling into David’s head, Amelia found Mer looking uncharacteristically nervous outside and put the magnitude of what they were about to do in perspective. This helped — at least in that it made Grey puke. (Never fun, but you always feel better afterward.) Back inside, Kai reported that David was running a fever. Soon, Grey discovered that his abdomen was rock hard — that hadn’t been existential pain he’d been suffering from! “It could be psychosomatic!” David argued. They had to operate within the 72-hour window of opportunity the FDA has given them! Unfortunately, he was going to need an ex lap. “You’re a rule breaker, Grey, so break the rules!” David barked. But she wouldn’t lie to the FDA. In response, he accused her of not wanting to cure him or Parkinson’s but her mother and Alzheimer’s. 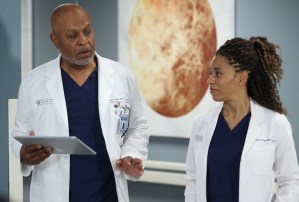 ‘GREY SLOAN IS MY YANKEE STADIUM’ | In the classroom, Jordan stopped Richard from introducing him to do so himself with lots of sports references. “Gross,” cracked Zander (one of our favorite 2020 scene stealers). When Richard gave Jordan an assignment on which he was to use the Webber Method, the resident responded that he was there to learn from Bailey so he wanted to use, if anything, the Bailey Method. “Looks like I’m scrubbing in,” chuckled Miranda. When Maggie’s dad explained his method to Maggie, she was like, “No, no baby-doctor hands alone on my patients.” Meanwhile, Levi and Taryn were to apply the Webber Method on a podcaster named Deven. (Schmitt was a big fan.) As they started to scrub in, watching from the gallery, Maggie was taken aback. It seemed like only yesterday Schmitt had been dropping his glasses in an abdomen! In a nearby O.R., Jordan impressed Bailey more and more. He didn’t even need an attending, but he’d wanted Bailey in there, anyway. He knew how to perform the surgery but wanted to learn from her. At the point at which Levi was supposed to wait for Richard, he… uh, didn’t. Suddenly, blood was spurting out of Deven like he was in a horror movie!

As the episode neared the finish line, Teddy climbed out the car window. “Take the cooler,” Cormac said, “and save Farouk.” By the time Maggie arrived in Schmitt’s O.R., it looked as if the floor had been painted red. Deven was very dead. Like, extremely dead. “I need to know what happened,” said Bailey, “now.” Taryn reported that Levi had thought he could start the dissection without an attending. Clearly not. “You call [time of death], Schmitt,” Bailey ordered. “This is your patient. Call… it.” Red-eyed, he did just that. “This,” Miranda then told Richard, “is on you.” At the same time, David went under the knife, and poor Farouk lay on the operating table waiting for his new heart, chest wide open. At last, Teddy flagged down a ride. Back at the car, Owen told Cormac to just go. When the car tipped, Owen would have a few seconds; he might make it. If he didn’t, he wanted Hayes to give Noah’s fellow dying soldiers the same drugs he’d given Noah. “It’s the right thing to do,” Hunt said. With that, Cormac escaped from the car, and down the embankment it went!

So, what did you think of Grey’s winter finale? Is Owen a goner? Grade the episode in the poll below, then hit the comments with your reviews, observations, quibbles — the works.