This week’s Law & Order: Organized Crime brings to mind that holiday classic — sing it with me! “I saw Mommy emotionally processing with Santa Claus, underneath the Fort Lee lights last night…”

The second half of the latest SVU/OC crossover deals primarily with a spot of trouble young Eli Stabler gets himself into, and of course it’s related to Richard Wheatley and his grand plan to mess with Det. Stabler at all times and in all ways. But the hour also features some very sweet (and sad) interactions between the youngest Stabler kid and his pop, both of whom are still kinda barely hanging on in the aftermath of Kathy’s death. And then Liv and El kinda have the “what are we to each other?” talk? GOD BLESS US EVERY ONE! Let’s dive in to “The Christmas Episode,” shall we? (And make sure to read a recap of the SVU portion of the evening, then check out what Organized Crime‘s Tamara Taylor and SVU‘s Peter Scanavino had to say about the episodes and their aftermath.)

We pick up right where the SVU half of the crossover left off: with Eli hanging out down by the river, watching SantaCon a-holes puking. A young woman named Mia strikes up a conversation with him and he winds up telling her about how he couldn’t bring himself to attend the end of his mother’s murder trial. “You wanna get out of here?” she asks, while Eli’s phone rings, unanswered, in his pocket. As Stabler and his family try desperately to figure out where the teen is, he travels to Fort Lee, NJ, with Mia, where they drink at her apartment. Pretty soon, he’s pulled out a bag of pills, and they wash them down with tequila. “To new friends with prescription benefits,” she says as they toast, then hold hands, then kiss.

The next morning, Eli wakes up in his boxers on the couch. When he goes into the bedroom to tell her he has to leave, she’s dead. HE’S BEEN CRAGEN’D! Eli understandably freaks, gets dressed and runs out of the building — but not before a neighbor takes special notice of him. 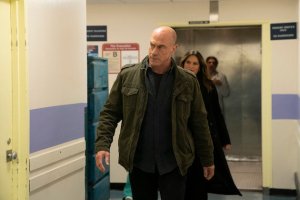 Back in Long Island City, the Stablers grow more worried. Eli eventually calls, but he’s upset and incoherent, crying and saying, “I’m sorry.” El says he’ll come and get him, then picks up Liv on the way. In the car, Stabler ruminates on why his son said, “I’m sorry,” and Liv tries to talk him down from his rising panic. She even holds his hand, which is sweet, but does little to calm him when Eli isn’t where he said he’d be.

And that’s because Eli is very close to the George Washington Bridge, seemingly ready to throw himself into the Hudson from a great height. A beat cop sees him and very gently approaches, managing to de-escalate the situation and eventually getting Eli to take his hand and step back from the brink. When El and Liv arrive at the station, Eli is bereft. He tells them what happened the night before, and when he gets to the “and she was dead” part, Concerned Mom and Dad snap into Capt. Benson and Det. Stabler right quick. Eli can’t remember if he had sex with Mia; while Elliot goes nearly catatonic with worry and fear, Liv says she’ll see what she can find out.

The Fort Lee police at the scene won’t help Liv out, but she overhears two uniformed officers talking about how Mia likely was murdered. The detective on the case says Eli is going to have a psych eval at the hospital, but then he’s going to be charged with murder — and Elliot can’t talk to his son anymore.

So he enlists Jet to help him find out anything they can about Mia, and she learns that the deceased was an escort and that the apartment they were at was a short-term rental owned by a pervert with a penchant for placing hidden cameras in his properties. Jet quickly gets access to the feed for the apartment Eli visited and, with Bell’s OK, plays it for Stabler. They see Eli coming in to wake her up, but then they rewind it and see the neighbor — the one who identified Eli to the Fort Lee police — was actually the person who killed Mia by suffocating her.

So charges are dropped, and Benson and Stabler go to the hospital to pick him up. While they’re waiting, Stabler says, “I want to know… about your life. What you’ve been through, the things I’ve missed.” Liv is taken aback, but she tells him she’s not seeing anyone at the moment. “But you did.” Dude, it was 10 years! She winds up telling him about Tucker — “I thought I might actually… but I wasn’t ready. And then Ed died.” — and he expresses sympathy. But then Eli’s doctor comes in, wanting to talk with Elliot.

The doc says Eli has severe anxiety, not just about the case but about how Elliot might react: “He told me how much you’ve been through, and he’s just not sure how much more you can take.” This revelation rocks Stabler; when he sees Eli, he hugs him, hard, and then they get ready to go, Stabler wiping his eyes as they leave the facility.

The creepy neighbor tells the Fort Lee cops that he was hired to kill Mia and make it look like Eli did it. He doesn’t know who hired him, but the reference came through someone at Riker’s Island, and he was paid in cryptocurrency. But before they track down any leads, Stabler has something he wants to tell his former partner. “Thank you for being there again when I needed you,” he says, all earnest, and Liv has HEARD this SONG beFORE. But he sees it on her face, and then he utters the pre-‘shippiest line we get all crossover: “I want to find balance in this, whatever this is.” She smiles, softening, and suggests that they call it a friendship. “Hey my friend, Olivia,” he continues, “I’d like you and your son, Noah, to come on over to my place this weekend for a family Christmas get-together. Please.” Her face says: nope, well maybe? Nope, definitely nope. Though maybe?  Her words say: “Let me think about it.” And then Stabler uses the softest possible voice I’ve ever heard emanate from his mouth when he adds, “Just come.” (No, for real, though — it’s like he’s gently questioning the sole survivor of a litter of kittens whose mother has suddenly disappeared or something.) 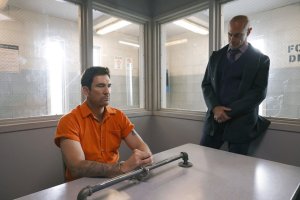 Anyway, Stabler’s next stop is an interview room at Riker’s, where Wheatley is being held while they wait to retry him. He denies that he hired the man who killed Mia. When Stabler points out that the proprietary cryptocurrency used to pay the guy was the same as the one that Wheatley once tried to pay an undercover cop with, Wheatley’s demeanor changes completely: His daughter, Dana, is in charge of that part of the business.

So Stabler and Bell visit Angela, who’s hobbling around her place with a cane and seems to be doing worse than she was even at the trial. She appears to be confused about who Dana is, and claims to have no idea of the young woman’s whereabouts. Before they leave, she feebly asks Stabler to come see her again, and he says he’ll try. But once they’re gone, Angela ditches the cane (!) and walks very normally to her kitchen, where she pours two glasses of wine — no evidence of being debilitated in any way (!!). She played them! “I think you need to disappear for a little while, honey,” Angela says when Dana walks in the back door. “Your father should be able to arrange something.”

At Casa Stabler, Eli and his father talk about how any outcome in a trial won’t bring Kathy back, and how they just want to be together as a family. “You’re here now, right?” Eli says, crying a little as his dad reassures him that he’s around for a while. Meanwhile, at Riker’s, Barba visits Wheatley to let him know that the District Attorney’s office isn’t going to pursue a case against him any longer: There isn’t going to be a retrial, and he’s a free man.

At Elliot’s, everyone is gathered for Christmas when there’s a knock on the door. “They’re here!” a jolly El tells his family, and aw, he even has a tie on! But it’s Bell, with news of Wheatley’s freedom. Bah humbug!

Now it’s your turn. What did you think of Hour 2 of the crossover? Sound off in the comments!