Four episodes into Hawkeye and we still know little about Kazi, a longtime member of the Tracksuit Mafia. According to Fra Fee, who plays the “hot guy” (as Kate put it), the high-ranking criminal is much more than meets the eye.

“I don’t think he’s an inherently evil person,” Fee tells TVLine. “If there’s no need for bloodshed, I reckon he would decide against it.”

What we also know is that Kazi is Maya’s trusted confidant and often serves as her voice of reason. The pair have known each other since childhood, meaning their relationship runs deep. (Fee confirms that young Maya is watching Kazi compete in a karate tournament during that Episode 2 flashback).

“There’s a familial bond between the two, having grown up together, but Kazi is also fiercely loyal to the [Tracksuit Mafia],” Fee shares. “It’s the only sense of stability he’s ever known in his life.”

The series will continue to explore Kazi’s unique dynamic with Maya, but as Fee teases, there’s “certainly another relationship that is going to be dissected.” 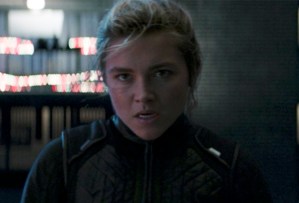 With just two episodes remaining, there’s plenty left to unpack, including who hired Black Widow’s Yelena Belova (played by Florence Pugh) to take out Clint. Yelena briefly fought the ex-Avenger in Episode 4, and while she may have escaped, there’s still unfinished business between them — especially since she believes Clint is responsible for her adoptive sister Natasha’s death in Avengers: Endgame.

“The stakes are getting higher and higher,” Fee teases. “The scenario we’re going to all find ourselves in is going to be epic, and it won’t feel particularly Christmas-y.”

Kazi and Yelena would appear to have nothing in common so far, but the actor notes that they’re “most similar in their steadfastness to their own goals and objectives.” Both characters “never in a million years would have expected their worlds to collide in the way that it has with all these other people around here getting on with their stuff. It’s a bit mad, but it’s super fun.”

Want scoop on Hawkeye, or for any other show? Email InsideLine@tvline.com and your question may be answered via Matt’s Inside Line.