When it comes to Hawkeye’s Maya Lopez (played by Alaqua Cox), who is both deaf and an amputee, directing duo Bert and Bertie say the skilled Native American assassin uses her disabilities as sources of strength in the Disney+ series.

“That’s her superpower,” the directors tell TVLine. “Everything that she’s learned in life comes from what we see as a disability… but that’s the reason she kicks ass.”

Rather than hide Cox’s prosthetic leg, the directors say they made it a part of Maya’s character. “It was like, ‘Oh, that can actually add to the superhuman nature of [Maya].’ She’s a hero. Alaqua is a real-life hero, and what she’s overcome in her life is really mirrored in Maya’s story,” they share.

In Hawkeye, Maya (who will lead a spinoff that already been ordered to series) is a young woman out for revenge. Episode 3 revealed that her father William was murdered by an assassin wearing the Ronin suit — their face was obscured in the flashback — jumpstarting this longstanding quest for retribution. “It all became about revenge for her father’s death,” Bert and Bertie say. “She spent her life driven by that moment when she loses him.”

As the leader of the Tracksuit Mafia, Maya appears to be acting on her own accord at first glance. In the comics, though, she becomes the adoptive daughter of Wilson Fisk, aka Kingpin. Whether she’s working for herself or someone else remains to be seen in the series, and Bert and Bertie are playing coy: “Watching the show, you’ll probably find out.” 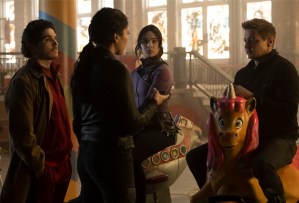 However, the directors confirm that Hawkeye will dive deeper into Maya’s dynamic with Kazi (played by Fra Free), who acted as both a translator and voice of reason during Maya’s interrogation of Clint Barton and Kate Bishop in Episode 3.

“The version of Maya we’ve seen has been born of losing her father, and she reacts to things very emotionally and very in the moment, whereas Kazi is a passionate, more level-headed character. Fra [Fee] and Alaqua’s dynamic throughout the show is dynamite, so you’re going to see much more from there. There’s a great Tracksuit story,” they tease.

The series has already seen its fair share of exciting moments, like Episode 3’s car chase in which Kate fired off trick arrows at the Tracksuits while Clint drove the getaway car. “We wanted to add more Christmas moments in the car chase, and so the Christmas tree lot came out of that,” Bert and Bertie say of the chase. “It was always, ‘How do we make Christmas a part of the story?’ And then when you’re going through a lot of Christmas trees, it’s like, ‘OK, what arrows are going to do what in this?’ We just expected we would have to cut some [arrows] in the end, and we didn’t. They’re all in there, which is awesome.”

After helming Episodes 3, 4 and 5, the duo notes that each installment has its own unique stamp on it. All three episodes get into the “meat and the emotion and the character development” of the series. Rhys Thomas, who directed the first two episodes and will helm the finale, “had the hard task of setting up this world and setting up the tone, but now you get to be with characters and live with the characters,” they explain.