Grey’s Anatomy fans hoping that Jo and Link’s mom-and-pop operation wouldn’t blast them out of the friend zone had to have watched Thursday’s episode on the edge of their seats. In “Today Was a Fairytale,” he confessed to his bestie that he used to have a huge crush on her. Did he still? Did she reciprocate those feelings? Did we even find out? Read on, and all will be revealed. 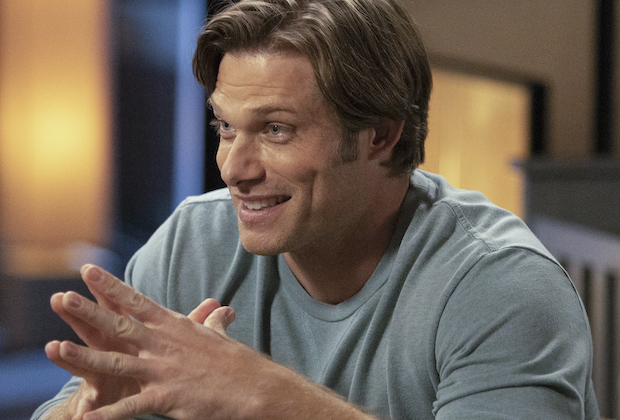 ‘WAITING TABLES IS HARD ENOUGH WITHOUT THE ADDED MORTIFICATION OF DRESSING LIKE A SHELLFISH’ | As the episode began, Jo lamented that Link wanted to spend his day off moping over Amelia. Jo, on the other hand, had other plans. At Grey Sloan, Maggie surprised Winston with her return before he could surprise her with jewelry, flowers… something. In Minnesota, Mer took a call from Bailey about their booth moving at the medical convention. Thing was, Mer wasn’t going to the convention. Bailey just didn’t know because Grey had forgotten to hit SEND on the text. How was Bailey supposed to recruit the best and brightest without her? Dr. Lin was hardly the draw that Grey was! Rather than join his boss at the convention, Winston continued “reuniting” with his bride. Back in Minnesota, David complained that his Parkinson’s was progressing faster than Grey was. “I hired you to get things done,” he fussed. “When Meredith Grey wants to get things done, she does!” If she didn’t, he’d pull the plug not on the project but her! Well, OK, then! 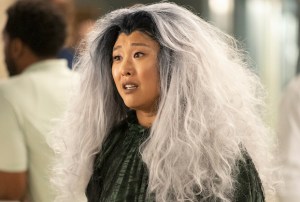 At a fairy-tale performance at the park, Link continued to be a Debbie Downer. And it didn’t seem like Jo’s suggestion that he get a snack was going to help. Soon, they were distracted by all the wrongs in the story of Rapunzel — oh, and prince Jeremy’s on-stage fall. “I can help,” said Jo. Yikes, Jeremy seemed to have a bone sticking out of his leg. Not a doctor here, but that didn’t seem good. For added complications, he had a heart condition to boot. Soon, Jo and Link were defibrillating Jeremy while Rapunzel sang to calm Luna and Scout. Soon, the docs realized that they needed an EpiPen — and in an audience full of kids, c’mon, there had to be one, right? Coupla shots later, Jeremy had a pulse again. 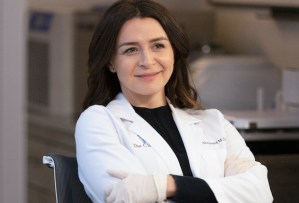 ‘MAYBE I’LL JUST PULL THE PLUG ON MYSELF’ | Frustrated by David’s frustration, Mer agreed to Amelia’s suggestion that she give her and Kai a day to make a breakthrough. While Grey stepped away, Nick roped her into scrubbing in on a surgery that turned out to be on Bryan, his longtime best friend who’d donated a kidney to him. When Nick got way too all up in Grey’s business in the OR, she ordered him out. Meanwhile, Amelia and Kai got to know each other better. Kai scored big points by not even knowing who Amelia’s McBrother was. Kai wondered if Amelia would really walk if Grey walked. That wasn’t something to worry about, Amelia said, because they were going to crack the case. And whad’ya know? Even as David hovered anxiously, they did. “Oh God,” David said, “I hope I didn’t run off your sister.” 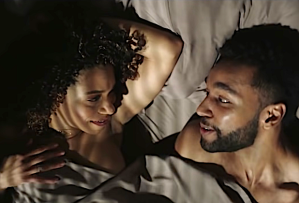 ‘CHICAGO LUTHERAN’S HANDING OUT DEEP-DISH PIZZAS’ | At the recruiting convention, Bailey and Lin were outshone by everything from laptop raffles to massages. Miranda had lost her razzle dazzle when she’d lost Grey. Lin kinda saved the day, though, by having Levi and Mabel explain “the Webber method.” Well, it seemed like that for a hot second. These would-be MDs were all about the swag. Alone with Winston, Maggie admitted that she thought that her dad was better before he’d said he was, he’d just liked having her there. Winston was simply delighted to have her back in his arms. When at last the newlyweds arrived at the convention, Bailey vented her frustration. Back in her day, they hadn’t even offered pens, the doctors had been enough. Now what? “We’re supposed to beg for their attention?” 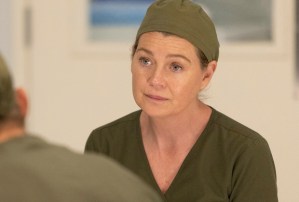 ‘I DIDN’T WANT TO MAKE YOU PERSONALLY INVESTED’ | As the episode rounded the corner toward the finish line, Link paged Teddy to scrub in on Jeremy’s surgery. He would be fine, it turned out. As Jo chuckled over Jeremy’s BFF who was clearly in love with him, Link admitted that he’d been smitten with Jo once upon a time. But thank goodness they’d remained friends, he said, because where would they be without each other now? “Where, indeed?” her expression seemed to ask. Was she starting to see Link in a new light? That night, a fresh awkwardness settled over Jo and Link. At least on her part. Having Googled Rapunzel and found out how the couple had reunited after going through all kinds of [bleep], she now thought maybe she and Link could still have their happy ending. Yeah, she was getting into the idea of them. In response, “I love Amelia,” he said, totally missing the point. He didn’t need to marry her, he just needed her. Oh, Link, you lunkhead!

After Mer reported that Bryan was going to pull through just fine, thank you, she scolded Nick for keeping her in the dark about their connection. He hadn’t wanted to make her feel personally responsible. But he could, she insisted. He might as well. She was invested every time she set foot in an OR. As Amelia and Kai left the lab, the latter thanked the former for not bailing on the project. And Kai demonstrated an understanding of Amelia that she clearly found intoxicating. Way to make us wait for that kiss, Grey’s! Finally, when Mer made it back to Grey Sloan, she apologized to Bailey for not making it to the convention. Bailey didn’t want to hear it. What she was happy to hear, on the other hand, was that Nick’s favorite resident, Jordan Wright, wanted to transfer from Minnesota to Grey Sloan. And why? Because of Bailey.

So, what did you think of “Today Was a Fairytale”? The comments section below is now open for business.