Chuck and Prince aren’t besties anymore, and the moment the business titan betrayed New York’s Attorney General on Showtime’s Billions is the moment they became the drama’s latest mortal enemies.

This is where the new Season 6 trailer the cabler dropped Wednesday takes fans as it establishes a broader thinking but ever-vengeful Chuck setting his sights on Prince and all of his one percent pals. In one scene, Chuck’s lawmen can be seen snatching up hedge-fund bigwig Steven Birch (recurring guest star Jerry O’Connell) and throwing him in the backseat of a tinted-windowed SUV with a villainously grinning Chuck waiting to pounce.

“It’s not one billionaire,” Paul Giamatti’s Chuck can be heard saying in the souped-up sizzle reel for Season 6, which debuts Sunday, Jan. 23. “It’s the billionaire class. I’m going to get them where they live.” 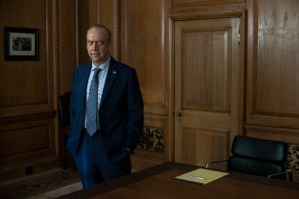 Chuck’s promise is especially aimed at Mike Prince, the man he worked with to bring down Axe in Season 5. But Prince, played by series regular Corey Stoll, couldn’t be trusted, and he used the takedown to quickly buy up Axe Capital and fold the company into his own. Now, Prince is Wendy’s boss and the biggest star on Chuck’s hit list.

Meanwhile, Wendy, Taylor and Wags are shown trying to work with Prince while not-so-secretly despising him, as Dollar Bill and Mafee find success elsewhere. Time will tell if Billions fans develop a love-hate relationship with Stoll’s Prince as well.

The show focused on the cat-and-mouse game between Chuck and Axe for five seasons until Damian Lewis, who starred as the enigmatic billionaire, wanted out. The show’s writers granted Lewis’ wish and had his character go on the lam in Switzerland in the Season 5 finale.

Condola Rashad, who plays attorney Kate Sacker, says the star’s exit is just what the financial drama needed to shake things up and keep fans guessing.

Are you excited about Season 6 of Billions, or are you mentally catching the next flight to Zurich? Check out the video above and drop your thoughts in the comments.