Up until the moment that Axe escaped to Switzerland in the Billions Season 5 finale, fans were probably thinking the character would look into the camera and say “just kidding!” and run back to Wendy’s loving arms in New York.

But that wasn’t meant to be. Damian Lewis, who had played the enigmatic billionaire for five hit seasons, didn’t renew his contract because he felt like there was nothing else to mine creatively. “We know who he is,” Lewis recently told the New York Times.

Condola Rashad, who plays attorney Kate Sacker on the Showtime drama, excitedly waited to see how viewers would respond to the show’s new direction with Axe out and Mike Prince (played by series regular Corey Stoll) in. She says Lewis’ exit is just what the financial drama needed to shake things up and keep fans on their toes. 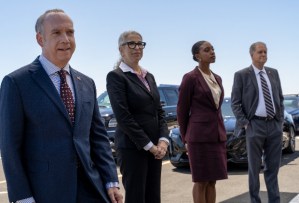 To Rashad and Lewis’ point, Billions, over time, became a show where States Attorney-turned-New York Attorney General Chuck Rhoades (Paul Giamatti) would vow to take down Axe and fall short over and over. It happened so much that even the character’s father, Chuck Sr. (Jeffrey DeMunn), was shocked in the finale that his son had actually succeeded. Axe got away, of course, but he lost his native New York, half of his money, and Wendy (Maggie Siff), the woman he loved, to avoid prison time.

But will Stoll’s Mike Prince be able to command the screen the way Axe did? He dazzled as Axe’s enemy, but will he do the same with Chuck, whom he betrayed in order to buy Axe Capital at half price? Rashad promises the series’ new twists and turns will be worth the wait. (Billions returns for Season 6 on Sunday, Jan. 23.)

“There are rooms and situations that characters end up in that no viewer will expect to see that character in,” Rashad teases. “It’s all really exciting, and there’s a lot of action, just like in the finale.” 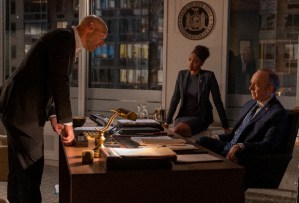 Fans will also see Kate become more and more like Chuck to the point she could lose her moral compass, especially now that he’s gunning for Mike Prince.

“The longer Kate works with Chuck, the more slippery things will get,” Rashad reveals. “She will make moves that look legitimate on paper, but it’s actually not. Kate finds a way to get shady things done. She’s very smart like that. Kate learned that from Chuck, and that’s why they have that connection. It’s like a mentorship, or an uncle-and-niece vibe.”

But that doesn’t mean that Chuck and Kate can truly trust each other, either. After all, Kate stabbed her own father in the back and had him arrested in Season 5.

“What makes things complicated,” Rashad adds, “is even though Kate and Chuck have that camaraderie, their own interests still come first. Chuck is like an uncle to Kate, but she still might throw him under the bus, and he might do the same to her.”

Are you excited about the Season 6 premiere of Billions? Drop your thoughts in the comments.