Karen did too much right out the gate on Tyler Perry’s Sistas this Wednesday when she popped up at Andi and Fatima’s job looking to pop off.

Old girl must have bionic hearing for starters, because somehow she heard Andi tell Fatima that she should give Zac a chance and that Fatima and Zac should be together. Karen stormed through the door of Andi and Fatima’s law firm breakroom not long after Andi said those words and started yelling and acting wild.

Karen asked Andi why she would say such a thing if she were really her friend, and then she started acting all big and bad, saying Andi should leave so she could “talk” to Fatima alone. Andi politely but sternly asked Karen to leave and not to behave that way at her job, but Karen was on one and refused to listen to Andi.

Annoyed — especially after Karen started calling her all kinds of bitches — Fatima closed the breakroom door and said she had all the time in the world to put Karen in check. Andi stood between the two, but Karen acted like she really wanted to physically attack Fatima and pretended to push past Andi like she was going to mess Fatima up. Fatima was ready to tussle too, but nothing came of it, thankfully. 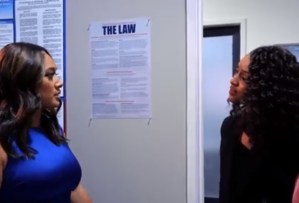 Andi convinced Fatima to consider her job and professional decorum, and eventually, Fatima left the room, and Karen proceeded to berate Andi and call her a bad friend. Andi stood her ground, however, and reminded Karen that not only were things over between her and Zac, but it was Karen who ended it.

Karen wasn’t trying to hear reason, and she angrily shoved the court order she was holding into Andi’s stomach. That court order was actually the reason Karen came to see Andi in the first place, but the gesture was so mean and aggressive, Andi had to tell Karen not to “shove s–t at me,” and then Karen split. Sigh.

A visibly shaken Fatima then went to her office and called Zac and told him how Karen was behaving. Zac promised not to call and curse out Karen, and he didn’t. Instead, he went to Karen’s salon and kindly told her that although he still loved her, they couldn’t be together because they were bad for each other. Karen had a hard time accepting what Zac said and dropped a bombshell on him by saying she was pregnant. Whether or not Karen is telling the truth, or if the baby is even his, remains to be seen.

The fact that #TeamZatima is getting a spinoff of its own implies that either Karen is pulling a fast one or she’s joining them for their show if Zac is the father of her child. We’ll all have to wait and see. 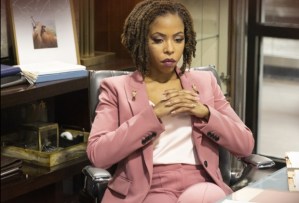 No sooner than Robin left, Gary made a dramatic appearance at Andi’s office and said he wasn’t really cheating on her. He also said the woman on the other end was an older lady who worked at the spa he frequents. Luckily, Andi wasn’t trying to hear Gary’s nonsense, and she said she didn’t care who the woman was and she wanted him to move out of her place as soon as possible. When Gary attempted to get loud and belligerent just like Karen had, Fatima stepped in and said Andi had to go meet with the partners.

Are you glad Andi is finally dumping Gary? And do you think Karen is really pregnant? Drop your thoughts in the comments.