No, you’re not peering into the Mirror of Erised: HBO Max actually has released the first photo from its upcoming Harry Potter retrospective special.

In the shot, the film’s central stars — Daniel Radcliffe, Emma Watson and Rupert Grint — gather on a set that looks similar to the Gryffindor Common Room. Oh, to be a Rita Skeeter on the wall! 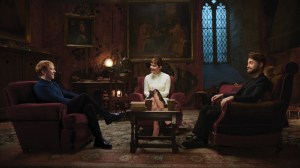 TBS and Cartoon Network will broadcast the special sometime in Spring 2022.

“There’s magic in the air here with this incredible cast, as they all return home to the original sets of Hogwarts, where they began 20 years ago,” executive producer Casey Patterson (A West Wing Special to Benefit When We All Vote) said via statement when the special was announced. “The excitement is palpable as they prepare to take their fans on a very special and personal journey, through the making of these incredible films.”

What are you most looking forward to seeing in the special? Take a good look at the photo above, then hit the comments with your thoughts!