The Roys descended on Tuscany for a wedding this week on Succession — but is someone getting cold feet about Waystar’s acquisition of GoJo?

At a Waystar board meeting, Roman informs Sandi and Stewy about the GoJo deal, and Sandi feels ambushed by the news. Stewy doesn’t want to back out, though. It’s a little awkward, with Shiv and Kendall phoning in (Shiv is home moping in bed) and Logan forced to glare at them through glass doors while the investigation is discussed. Roman’s really feeling his oats, though: On the jet to Italy for his mother Caroline’s wedding, he brags that Shiv and Tom aren’t really involved in the GoJo deal — and that when he’s boss, he’ll either fire Shiv or make him his “sexy secretary.” (Dude… that’s your sister.) He’s also jealous that Gerri’s bringing a date to the wedding, and she flatly tells him to stop sending her “the items,” aka dick pics. (If he does ever become CEO, they’re gonna need to double the HR department.) 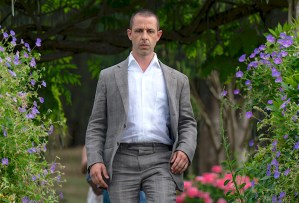 Kendall arrives with a fresh buzz cut — “Have you just come back from the front?” Caroline wonders — and he bristles when she asks him to skip some events that Logan will be attending. Connor is concerned about a journalist who’s digging into Willa’s unsavory past, and Roman dismisses Caroline’s new beau as “another in the line of post-Dad posh English phonies,” urging her to get a pre-nup. She waves all that off as “un-romantic,” though. Greg looks comfy with Comfry (sorry), but when Shiv and Tom push him to use her as “a date ladder,” he sets his sights on an Italian princess. Oh, and Comfry tells Kendall he’s been asked to do an interview with a podcast investigating “the curse of the Roys”… including the mystery surrounding the death of that caterer at Shiv’s wedding. Uh-oh.

They all hit the panic button, though, when Matsson tweets out a cryptic message about “feeling lucky,” and then a string of emojis of a gaming controller, an eggplant and crossed fingers. Is he trying to goose his stock price ahead of the deal? Roman assures everyone he can handle it, but Shiv warns him if this deal falls through, they’ll become the “Pan American Waystar Blockbuster Video Dial-Up Corporation.” (Catchy name.) Meanwhile, Connor decides to nip the Willa controversy in the bud by getting down on one knee — “Will you make me the most happiest man-slash-most bulletproof candidate in the world?” — and she says yes for now, but tells him she still needs to “have a think” about it. Plus, Kendall marches up to Logan and demands a one-on-one meeting that night at dinner. Logan’s terse reply, through Roman: “We’ll get back to him.”

While Shiv spends quality time with her mother at an all-ladies outing (“I probably should’ve never had children,” Caroline confesses — thanks, Mom) and Roman jets off to meet Matsson in person, Kendall and Logan sit down for a meal. Logan is highly suspicious: He even has Kendall’s son take a bite of his dinner first to make sure it isn’t poisoned. “You think I want you dead?” Kendall asks. “I’ll be broken when you die.” He wants out and agrees to take the $2 billion payout: “You’ve won, because you’re corrupt, and so is the world.” But Logan doesn’t want to let him go that easily, and he defends himself: “I f–king know things about the world, or I wouldn’t turn a buck. Not necessarily nice things.” Then he cruelly brings up that caterer: “How long was that kid alive before he started sucking in water?” He reminds Kendall that “whenever you f–ked up, I cleaned up your shit,” adding one final “f—k off” before walking out. 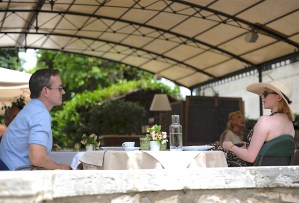 Shiv gets back from her night out and greets Tom with a passionate kiss: “Let’s have a baby.” She’s ready to fight for that CEO position… and she’s turned on, too. When Tom says she can do whatever she wants to him, she starts belittling him as foreplay: “You’re not good enough for me… That’s why you love me, even though I don’t love you.” He’s into it in the moment, but the next morning, he feels funny about it. She laughs it off as just “dirty fun,” and she does still want to have a baby with him: “I may not love you, but I do love you.” (Ah OK, that clears it up.) At a stunning lakeside villa, Roman meets with Matsson as GoJo’s stock price soars. Matsson shrugs off the concerns about his tweets, and he still wants to do the deal, but now he’s rethinking the terms as more of an equal partnership: “I just want to get myself the best of everything.”

Roman has to break the bad news to Logan: Matsson doesn’t want an acquisition; he wants “a merger of equals.” Logan would have to share control, and the family equity share would be heavily diluted. To Shiv’s surprise, Logan seems open to it, and Roman sells him on the idea: “Let him have the logo. We take the wheel.” Logan is convinced, and Gerri texts Roman “well done” from across the table. Roman replies, naturally, with a dick pic… but he sends it to Logan by mistake! (Logan’s face, and then Roman’s, are just priceless here.) Logan storms out of the room, and Shiv tells him that Roman has been “weird about Gerri” for a while now. He sends her away — and loudly yells for Roman.

He aggressively slides his phone at Roman, asking him, “Are you a sicko?” Roman tries to tell him that everyone does this these days — speak for yourself, Rome! — but Logan fumes, calling Roman “a laughingstock” and wondering if he needs to fire Gerri (!). Shiv pulls Gerri aside, and Gerri insists that “it’s not a big deal… I can cope.” Shiv wonders why she never reported this to HR, though, and suggests they bring it directly to the board… and we can sense that Shiv is calculating how to game this in her favor. Back in the sunny Italian countryside, Kendall is catatonic on a pool float, clutching a beer while his kids wander off. He drops the empty beer bottle into the pool… and it kind of looks like he’s the one drowning.

Got thoughts on tonight’s Succession? Predictions for next week’s finale? Drop ’em in the comments.