Kendall pulled out all the stops to throw himself a lavish birthday bash this week on Succession — but he didn’t get everything he wanted.

We catch up with Kendall as he rehearses for the party, singing Billy Joel’s “Honesty” with a huge wooden cross nearby (???). It’s all a bit… much, but he can’t stop now, he tells Naomi: “If I start second-guessing, it collapses.” (Gee, that’s kind of the key to understanding Kendall Roy in a nutshell, isn’t it?) Meanwhile, Logan gets some good news: Gerri reports that the DOJ thinks Kendall’s evidence isn’t a slam-dunk, and Waystar’s punishment will just be a fine — “nothing custodial.” Logan pushes Shiv and Roman to lock down a deal with upstart tech firm GoJo… and he also squeezes Tom’s arm, telling him, “I’ll remember.” Tom celebrates his newfound freedom by beating his chest like a wild animal and tearing Greg’s office apart before kissing him on the forehead. At least he didn’t castrate and marry him. 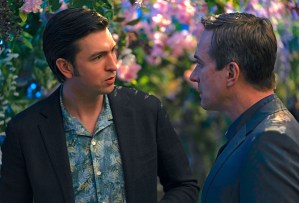 The birthday party is as over-the-top as you can imagine: When Shiv and Tom arrive, they walk through a long pink tunnel towards a nurse who tells them, “You’ve just been born into the world of Kendall Roy.” (Oof.) Greg confides in Tom that he’s working up the nerve to ask out Kendall’s PR girl Comfry, but Tom just laughs at him: “It’s like a haunted scarecrow asking out Jackie Onassis.” Shiv and Roman, meanwhile, are only there to schmooze with GoJo’s reclusive CEO Lukas Matsson, played by Alexander Skarsgard, who tells Kendall he’s just looking for three things tonight: “p—y, privacy, pasta.” (OK, then.) Roman also gives Kendall a card from their dad… but Logan crossed out “Happy Birthday” and wrote in, “Cash Out and F—k Off,” with a settlement offer enclosed.

The offer would buy Kendall out of his Waystar shares for about “two bill,” he tells Naomi, and she thinks maybe he should take it. He could buy her a huge diamond, and they could move to Marrakesh and smoke hash together. But this is all making Kendall regress at a rapid rate: His party has a VIP area he calls “the treehouse,” and he won’t let Shiv and Roman inside to play. And he spirals further when he sees Rava and learns his kids made him a present, but he didn’t get it yet — plus, Logan has been sending goons out to harass the kids’ nanny and interrogate her about Kendall’s bad behavior.

Kendall takes his anger out on Connor, who refuses to take his coat off. He sends his PR team out to change his mind: “He’s souring the vibe… he’s making everyone feel cold.” He’s disappointed in his party: “It feels like an a–hole’s birthday party.” (Well, yeah.) Then he turns his ire towards Greg, drunkenly telling him that Humphrey is out of his league: “You’re like the world’s biggest f–king parasite.” (He’s kidding… or is he?) Roman manages to sneak into the treehouse and finds Matsson, chatting him up about a possible deal. But Matsson wants to know: “When will your father die?” Roman chuckles — “We’re all obviously hugely looking forward to my father dying” — and assures him he’d only have to deal with Roman, not Logan. They make fun of Waystar’s crappy streaming service, and Matsson literally takes a whiz on it in a urinal while it’s loading on Roman’s phone… but that odd male bonding is enough to get Matsson to agree to a handshake deal. 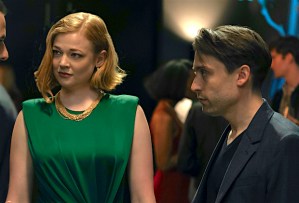 Shiv’s left with nothing to do, so she downs a drink and hits the dance floor, tearing it up with wild abandon. Greg stammers his way through asking Comfry out on a date — and she says yes! And Kendall is about to get into a harness for his big number, but he ditches it at the last second: “I don’t think I’m gonna do this. It’s bulls–t.” Instead, he tears apart a room full of expensive presents looking for the one his kids made for him, but he can’t find it. Naomi tries to comfort him with her own gift, a pricey watch, but he can’t understand why she’d get him that when he already has a watch. His eyes well up with tears as he tells her, “This is so pathetic… I wish I was home.”

Greg is riding high as he and Tom walk through the party’s “compliment tunnel,” where people pop out to tell you how great you are, and Tom can’t believe it: “It’s supposed to be me that’s happy, and it’s you. How did that happen? I took the wrong drugs in the wrong order, and I can’t get happy.” Roman taunts Shiv with the fact that he sealed the GoJo deal, not her — oh, and that she sucks at dancing. Kendall angrily tries to kick them out of the party, and he gets even madder when he finds out Roman knew Logan was spying on his kids. Roman ends up shoving Kendall to the floor and laughing at him — and Kendall is still yelling at Connor to take his coat off as he’s walking out the door.

After the party, Tom tells Shiv he’s going to stay out for a while without her, a triumphant Roman reports back to Logan that he got GoJo (“I’m the only child you need. You can kill all the others”) and a deflated Kendall looks out over his balcony as Naomi hugs him. He lays his head down in her lap, wrapped in an A-Team quilt, looking more than ever like a lost little boy.