A revitalized Logan played kingmaker this week on Succession, choosing which presidential candidate would get his all-important backing. But which Roy sibling got squeezed out in the process?

Kendall prepares to testify about his dad’s crimes to the Department of Justice, but his lawyer Lisa warns him the papers he has aren’t as incriminating as he thinks: “This isn’t a slam dunk here.” Meanwhile, Logan is back to his old self on a private jet — guess Sandi didn’t take them away after all — and Roman gossips with Shiv that their dad is sleeping with his young assistant Kerry. (Hmmm, they do seem awfully close.) Later, Shiv confronts her dad about humiliating her at the shareholders’ meeting, and all he can say is: “It was a long day, and I was unwell.” And when Shiv reminds him they’d have lost control of the company if it weren’t for her, Logan quips, “Kerry, give Shiv a f—king medal.” 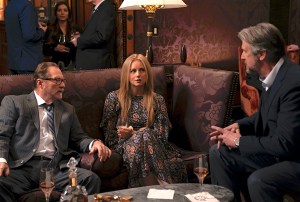 They arrive at the Future Freedom Summit, a conservative event that doubles as a straw poll for the Republican Party’s next presidential candidate, now that the current President is bowing out. (“It’s a safe space where you don’t have to pretend to like Hamilton,” Tom tells Greg.) While Connor meets with his adoring fans, we meet a pair of key characters played by familiar faces: a powerful party operative played by Stephen Root who takes a sleazy liking to Connor’s girlfriend Willa, and a brash alt-right candidate named Mencken played by Justin Kirk, whose YouTube rants have won him a legion of followers. The current vice-president Boyer is another contender… but the Roys notice that he licks his lips a lot. Like, an uncomfortable amount. Plus, they get an email that their mom is getting remarried, which none of them knew about. (“New dad just dropped,” Roman tells Kendall in a phone call.)

Tom is still fretting about his impending prison time, and when Shiv tries to talk about something else, he snaps back, “Does the topic of my imminent imprisonment bore you?” She tries to start something romantic, but he laments that his sexual performance right now is like throwing “cake batter at a brick wall.” (Well, that’s certainly an image.) Roman hits it off with Mencken, who shares his sick sense of humor, and Shiv gets approached by another candidate who promises if she makes him President, he’ll send her dad to prison and make her CEO. (Intriguing!) Tom has a sad diner meal with Greg, telling him he’s now being called “the Christmas tree,” meaning anyone can hang all kinds of crimes on him. So can he take on Greg’s crimes, too? A defeated Tom says fine: “Load me up, you piece of s–t.” 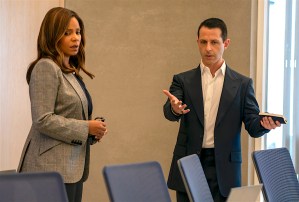 Kendall, meanwhile, is crashing and burning: His deposition goes badly, and he fumes in the hallway, calling the investigators “chicken s–t” for being intimidated by Logan. Lisa tries to talk some sense into him, but it’s no use. Soon, he tells his PR team that Lisa is “a toxic person” and he’s getting new legal representation. Plus, he wants to concentrate on planning his 40th birthday party anyway. Back at the conservative summit, Logan enjoys toying with Boyer, who badly needs his support, and Shiv gets into a heated discussion with Mencken, calling him a provocateur and “a red-pill a—hole.” He fires back that ATN is “dead” and Logan is “no longer relevant.”

Logan calls his kids together for a check-in: “Who do we like?” Connor suggests himself, natch. Roman and Kerry like Mencken, but Shiv argues he’s too extreme. She pushes her guy, which earns her some ribbing from Roman. Logan actually considers Connor, to Shiv’s horror. (When she points out his lack of a track record, Connor replies, “Nothing to beat me with.”) Tom has another diner meeting, this time with Kendall, who offers him immunity if he’ll testify that nothing at Waystar went through without Logan’s signature. Tom isn’t sure about that: “My hunch is that you’re going to get f–ked. Because I’ve seen you get f–ked a lot, and I’ve never seen Logan get f–ked once.” Kendall gets the upper hand, though, by snapping a photo of Tom as he leaves so he has evidence they met.

The major candidates cycle through Logan’s suite, taking turns bending the knee — and downstairs, the raucous partygoers lift Greg up on their shoulders, for some reason? Roman pitches Mencken on an alliance where they spruce up ATN’s programming with edgy TikTok commentators and build it around Mencken’s image. He meets with Logan, too, and when Shiv tells her dad he’s too dangerous to back in this climate, Logan reminds her that the climate also said he was finished as CEO: “Guess I’m a climate denier.” He throws his weight behind Mencken, and when they pose with Mencken for a family photo, Shiv refuses to be in it. Logan asks her point-blank, “Are you part of this family or not?” So she relents and joins the photo, but she insists she won’t stand next to him as she plasters on a fake smile for the camera. She couldn’t bring herself to walk away, though.