A Waystar shareholders’ meeting took center stage in an especially tense installment of Succession this week, with the Roy family’s control of the company hanging in the balance.

A grumpy Logan arrives for the meeting walking with a cane, and protestors have gathered outside, with the news calling the impending vote “too close to call.” Logan thinks Sandy and Stewy want too much and is willing to take it to a vote — but it doesn’t look good. (“Tomorrow, we’re all gonna apply for jobs at the same branch of Target,” Roman quips.) Logan’s waiting to hear from the President, who’s getting hammered by ATN, while Shiv rushes around in a panic and Connor sees the chaos as an opportunity to squeeze out some concessions for himself. You know, typical Roy family stuff. 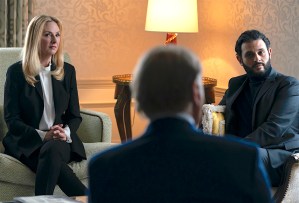 Kendall meets with Stewy and warns him that Logan is dead-set on taking this to a vote, so Stewy calls Gerri and offers to meet. Everyone on the Roy side celebrates… except for Logan. “What do they know that we don’t know?” he wonders. (This is why he’s the big boss, folks.) They meet with Sandy — who’s in poor health and unable to speak in a wheelchair — and Stewy, along with Sandy’s daughter Sandi, who speaks on her dad’s behalf. Stewy thinks they can make a deal, but they want the ability to veto any Roy as CEO. Shiv and Roman naturally bristle at this, but Sandi insists it’s a dealbreaker: “It would be a shame if you destroyed all this hard work over a detail.” Meanwhile, Connor is trying to weasel a company role for himself in Europe out of Logan, and Roman isn’t happy that Gerri seemed open to the idea of keeping all Roys out of the CEO chair. (Do we sense a lovers’ quarrel brewing?)

Greg arrives at Kendall’s war room and apologizes for defecting to Logan’s side, and Kendall says he understands… but he adds, “I may have to burn you.” Meaning, he may have to throw Greg under the bus to keep the investigation going. When Greg reminds him that he said he’d never burn him, Kendall tells him, “A lot of s–t gets said… You’ll probably be fine.” (Well, that’s reassuring.) Plus, Greg’s grandfather Ewan is angry that he went back to Waystar and is changing his will to give all his money to Greenpeace. (Greg: “Even my part?” Ewan: “That was the first part.”) So yeah, not a great week for Greg the Egg so far. 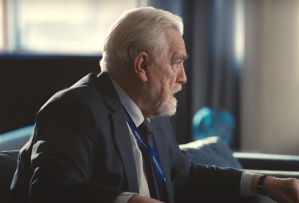 While Frank takes the stage at the shareholders’ meeting and stalls for time, Shiv is confident they can reach a deal after they iron out a few details. Logan doesn’t like the sound of the deal — but he’s also asking random people in the room what they think, which is a bit worrying. And when Sandi wants to take away the Roy family’s private jets as part of the deal, Logan says, “F—k ’em,” so Shiv tells her the deal is off and the vote is back on. (“I just do what my dad tells me,” Shiv says, which is giving us big Season 2 Kendall flashbacks.) But the clock is ticking, and Tom warns Shiv: Logan is completely out of it and talking gibberish. His assistant Kerry says he has a UTI, and if he doesn’t take his medication, he gets loopy. (“Reagan had one, and he nearly nuked Belgium,” Connor notes.)

Now they’re not sure whether they can trust what Logan is saying… and he’s busy looking for an invisible cat under his chair. Just then, Kendall barges in and wants to know why they torpedoed the deal, ordering them to fix it before storming off. While Gerri gets roped into replacing Frank and stalling for more time on stage, a doctor gives Logan a fast-acting medication via injection, Roman takes an angry call from the President (“I will certainly let him know that you are upset”) and Shiv takes it upon herself to strike a deal with Sandi. 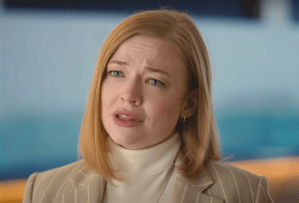 They meet one-on-one in private, and Shiv agrees to get rid of the jets and even sweetens the deal by offering Sandi a seat on the board for herself — as long as Shiv gets one for herself, too. The President tells Roman he’s not running for reelection thanks to Logan’s harassment campaign (Connor’s ears perk up at this), and Shiv reports back that they’ve struck a deal. They all celebrate, and Tom sweeps Shiv up in a passionate embrace… and announces he wants to impregnate her before he goes to prison. Karl tells the shareholders a settlement has been reached and no vote will be needed — and he’s interrupted by Kendall, who rushes the stage to read the names of the victims of “crimes that took place on our watch” and announces he’s starting a foundation in their honor. (This is met with confused, scattered applause.)

A now-coherent Logan won’t be happy, though, until he sees the fine print of the deal. Shiv reminds him that he was out of it, but he insists “I’d have figured it out.” And when she tries to hand him a flute of Champagne to celebrate, he pushes it away and spills it, barking at her: “Stop buzzing in my f–king ear.” (Ouch.) A hurt Shiv retreats as Logan gives Roman a congratulatory pat on the back. Kendall gets a message that Logan wants to meet with him, but when he arrives for the meeting, he’s informed that Logan already left. He tries to call his father, but Logan sees the number and hands his phone to Kerry, asking her to block his number… “permanently.”