Madison Clark lives! During Sunday’s Talking Dead, not only was it revealed that Fear the Walking Dead had been renewed for Season 8, it was announced that Kim Dickens would be reprising her role of Alicia’s mother, who’s been thought to be dead since way back in Season 4. (Click here to read how she was believed to have expired.)

Given the way that the show’s original leading lady left the show — or at least her unstoppable character did — much fanfare surrounded her imminent return to the fold in the back half of Season 7. “If there were a Mt. Deadmore, Kim Dickens’ face would be on it,” said Scott M. Gimple, Chief Content Officer of the Walking Dead Universe, in a statement. “Madison Clark is a foundational character to [our world] — heroic, complex, an everyperson who becomes a warrior and then a force of benevolence. Kim Dickens’ raw talent, strength and brilliance will electrify the Walking Dead Universe once more, and we couldn’t be luckier to have her back.”

On top of all that — oh yes, there was more — the Walking Dead spinoff dropped a trailer for Season 7B and disclosed its return date: Sunday, April 17. In the pulse-pounding clip, we get a good hint of just how intense the Strand vs. Alicia war is going to get. “You have your army,” Victor intones in that way that only Colman Domingo can. “I have mine.” 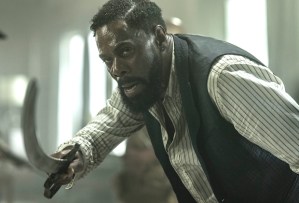 Yes, yes, but will Alicia survive both this kerfuffle and the walker bite that she’s convinced will soon turn her into a meandering zombie? That remains to be seen. All the post-apocalyptic drama will say is that “in the second half of Season 7, months have passed after the nuclear blast, and the only one thriving is Victor Strand. Having built a fiefdom, he callously selects who will have a chance at life. The other members of the group have suffered immensely, but out of that has come a fierce determination to live, even if it means taking Strand’s tower by force and continuing the search for Padre, a mythical place no one is sure really exists. 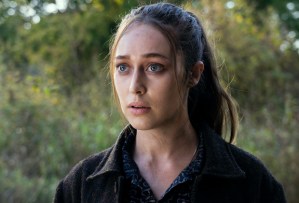 “Alicia, now the reluctant leader to Teddy’s former followers, is plagued by a mysterious illness and the repercussions of her past actions,” the logline continues. “Morgan, trying to maintain hope that he will be reunited with his family, knows Alicia is key to their survival. With Alicia declaring war, Strand’s paranoia and personal vendettas grow, and with that, new threats emerge from all sides.”

Sounds like a pretty good time, no? Watch the Season 7B promo above, then hit the comments. Do you think that the series that was cruel enough to kill Rufus would let Alicia die before reuniting her with her mother?