Dan’s efforts to sell off his furniture dredged up family history during The Conners fall finale, culminating in an offhand remark from eldest daughter Becky.

With Louise finally moving into the family’s Delaware St. home, it was time for Dan to part ways with the bedroom set he bought shortly after he and Roseanne got married.

“Before this, it was lawn chairs in the living room and a phone company spool for a table. That’s when we were just starting out and I wasn’t the mogul I am now,” Dan deadpanned. “But your mom saw a picture of this set in the Montgomery Ward catalogue, and boy did she fall in love with it.”

Before he tossed the bed, Dan asked if anyone wanted it. DJ turned to Becky and proposed a game of Rock Paper Scissors to determine the loser who gets to keep “the mattress we were conceived on and Mom died on,” but his older sister shut him down. 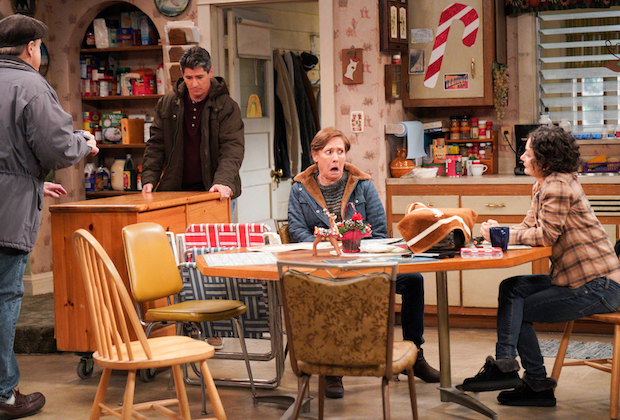 Dan explained to DJ that Louise wanted a new bedroom set — and since she paid for the wedding, he agreed to foot the bill for a new one. He was determined to sell the old fixtures to pay for a new bed and dressers, but — surprise, surprise! — no one was willing to pay top dollar for 43-year-old furniture. He ultimately decided to burn the old stuff, in celebration of what it symbolized, while surrounded by his loved ones outside the garage.

“This is a lot more than just a bedroom set,” Dan explained. “When I first married your mom, her family said I wouldn’t amount to anything. In a lot of ways, I thought they might be right. I had to prove to myself that they weren’t, so when your mom wanted this set, I worked my ass off for it — two jobs and a year of layaway — and when I finally brought it home, that’s when I realized I could step up and do the things I needed to do to be a husband and a father.” 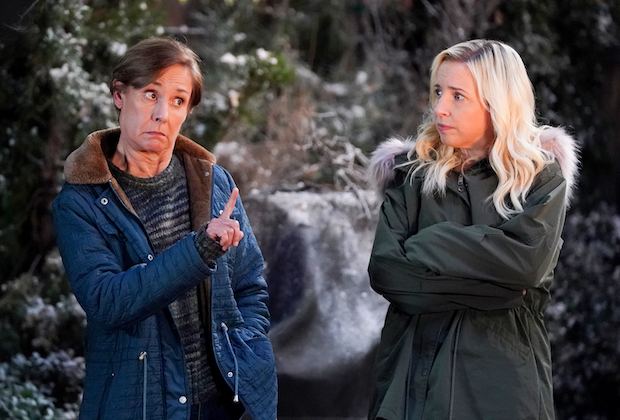 “I always thought the vikings did it best,” he said, explaining his decision to burn the old bed and dressers. “Set it on fire, send it to the heavens.”

“And if it goes the other way, Mom gets her furniture back!” Becky exclaimed.

The Conners has frequently referenced the late Roseanne Conner, including earlier this season when Darlene found a heartbreaking note in her mother’s Bible foreshadowing her tragic 2018 overdose. And though this particular TV family is known for their biting humor, it did seem in somewhat poor taste for Becky to crack wise about her late mother burning in hell, did it not? (If the line was meant to throw shade at Roseanne Barr, it sure wasn’t delivered that way.)

What was your interpretation of that Roseanne joke? Was it in poor taste, seeing as how the family has shown no ill will towards their late matriarch since her death in 2018? Or was it in line with the Conner family’s usual brand of humor?