This week’s Riverdale was a true devil’s bargain — but who ended up burning in hellfire? Let’s take a look at each character’s encounter with the devil himself, who takes the form of a mysterious blonde dude calling himself Lou Cypher (get it?):

JUGHEAD | When he hears the devil is in town, Jughead smells a good story and sits down with the man for an exclusive interview. The devil agrees to tell all, but gives Jughead a choice: Either Jughead can publish their chat, but he can never write again, or he’s never allowed to publish what the devil tells him. Jughead decides to publish it, and once he does, he’s inundated with calls from the Associated Press and his former agent. (There’s even talk of a Pulitzer.) But he tries to write more and it comes out as nonsense, so he goes back to the devil begging to change their deal. The devil agrees to let him write again in exchange for Jughead’s immortal soul, and Jughead is desperate enough to sign it over. See ya in hell, Jug. 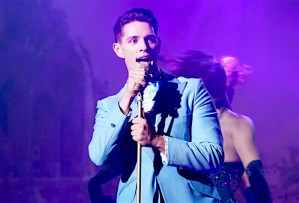 KEVIN | Hey, Kevin got an actual storyline! This must be the devil’s work! Kev is frustrated that his performing career never went anywhere, so the devil butters him up with compliments and then offers to make him a star… if he’ll sign on the dotted line. Kevin gets a small taste of fame, singing “It’s Not Unusual” to an adoring crowd and having Fangs — sorry, he’s “Finn” now — as his manager-slash-boyfriend. Kevin happily signs his soul over. After all, he’s got a chance to star on Broadway opposite Hugh Jackman!

BETTY | Betty gets word from Glen that the Trash Bag Killer has been captured and will only talk to her. She meets with the masked killer, but when she checks with Glen, he doesn’t know what she’s talking about; the Trash Bag Killer is still at large. So Betty goes back to the guy, who now admits he’s really the devil. He proves it by letting Betty hear from her dad, who’s burning up in hell. The devil wants her soul in exchange for her dad’s, and she says no, but the devil ups the ante by offering… Polly. He lets her hear Polly suffering in hell, too, and it’s too much for Betty to bear. She grabs a pair of scissors and stabs the masked man to death. But when she takes his mask off… it’s Glen. The devil gloats, and Betty resorts to stashing Glen’s dead body underneath her floorboards. 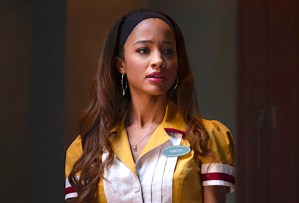 TABITHA | When Pop lands in the hospital, he and Tabitha get a visit from the devil, who is there to collect Pop’s soul. (Pop’s dad sold his own soul to help the diner succeed, and Pop later exchanged his soul for his dad’s.) The devil will take the diner instead, however, and he and Tabitha actually consider it. But then they meet another mystery man who calls himself Raphael and says he’s “one of the good guys.” (We can almost see his angel wings.) He wants to help and offers Tabitha a crystal vial filled with some kind of liquid. She and Pop agree to sign over the diner, and they serve the devil a celebratory milkshake — which he spits out before vomiting. Tabitha put the tears of the Virgin Mary in the drink (a gift from Raphael) and spreads more of them on the diner doorway, telling the devil they’re now protected, and the deal is off. Take that, Satan!

VERONICA | Ronnie and Reggie are ready to open their big casino, but Alice is campaigning against it, calling it an “abomination.” The opening goes well, but Veronica gets word that a man has won 20 straight blackjack hands and meets Lou Cypher. He says he’ll leave, but he’ll be back to collect a soul Saturday at midnight. Yes, Reggie says he sold his soul to get the casino the money it needed. Veronica hatches a plan to give the devil another soul in exchange — and hands over the always sleazy Nick St. Clair — but the devil reveals that it wasn’t Reggie’s soul he sold. It was hers! Reggie admits it: The devil didn’t want his soul, so he slipped in a contract so Veronica would sign over hers. Veronica scrambles for a substitute, even nearly tricking Alice into taking her place in hellfire, but she thinks better of it and celebrates her last night on earth by performing Lady Gaga’s “Marry the Night” at the casino. When midnight strikes, though, she’s still there. She struck a deal with the devil: She can stay if she provides him one soul each week… and she’s starting with Reggie’s. Her beau plunges into hellfire — and Riverdale‘s cast loses another member.