Riverdale cooked up a good old-fashioned ghost story this week… and another key character made the ultimate sacrifice.

The action starts with a vicious gang brawl between the Serpents and the Ghoulies that leads to Toni accidentally killing Darla’s son Danny. Months later, Toni is still traumatized by the accident, and things are getting spooky all across Rivervale: Jughead and Tabitha find a secret room in their new apartment and learn that it was the site of an infamous murder-suicide, and a creepy veiled woman — or, in Cheryl’s words, “an evil water nymph out of an M. Night Shyamalan movie” — emerges from Sweetwater River and tries to drown poor Juniper in a bathtub at Thorn Hill before Cheryl saves her.

Jughead tells Tabitha about the murder-suicide — it was a couple named Sam and Diane, and she bashed his head in with a hammer before hanging herself — and it’s got him inspired to write a new book. The two of them keep bickering over little things, though… and Tabitha has a dream where she smacks Jughead over the head with a hammer. And when a Serpent teen dies in a drowning, her mother tells Betty and Toni that it was the work of La Llorona, a vengeful spirit who drowns children.

An exhausted Tabitha asks Pop for help, and he tells her they had a ghost at the diner once, but a big riot scared it off. They might need to do that soon, too: Betty gets a late night visit from La Llorona, who puts her wet hand on Betty’s pregnant belly while she sleeps, and later, Dr. Curdle tells her she’s no longer pregnant. La Llorona also pays a visit to Toni, leaving her baby Anthony crying and soaking wet on the floor. Plus, Jughead and Tabitha’s relationship frays further when he won’t let her read his first draft — and then she finds out he always let Betty read his first drafts. 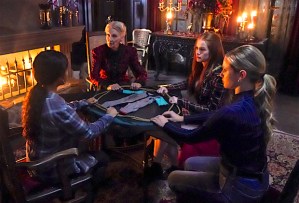 Desperate to protect her baby, Toni turns to Cheryl, who holds a séance at Thorn Hill to speak to La Llorona. The ghost arrives and says she was a maternity nurse who got blamed for the town’s high infant mortality rate and was drowned by the townsfolk. She was summoned by… Darla. So now Toni knows the ghost is after baby Anthony, to punish her for killing Darla’s son. Jughead and Tabitha have another loud fight in their apartment, and she ends up smashing the typewriter Betty gave him. She picks up a hammer, too, but when she sees Diane in her reflection, she stops herself. She and Jughead promise to work out their problems and even exchange “I love you”s for the first time… and they can hear the ghost leaving forever. 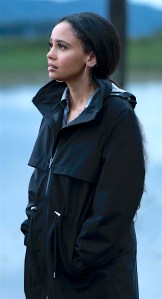 Toni tries to apologize to Darla, but she cackles that La Llorona won’t stop until Anthony is dead. Toni sets up an army of Serpents to surround Anthony, but the ghost still gets through and takes the tot to Sweetwater River. Toni catches up with them and pleads with the ghost to spare the baby’s life. She can even ease the ghost’s suffering… by taking her place. Toni is ready to accept her punishment for killing Danny, so to save Anthony, she swaps place with the ghost and becomes the new La Llorona, asking Betty to take care of Anthony before walking into the water, never to return. So we’re two weeks into this “Rivervale” event, and two main characters are dead. All we want to know is: Who’s next?

Elsewhere in the episode: Reggie’s dad was sick in the hospital, so Reggie comforted himself by buying a vintage muscle car just like the one he had in high school. He called the car “Bella” and started spending more time with it than with Veronica, which annoyed her. She got even angrier when she found a photo of a woman in the car: a former driver’s ed teacher who was accused of being inappropriate with her students… and yes, her name was Isabella. Ronnie smashed up the car, but Reggie denied doing anything inappropriate with the teacher. She just helped him cope with his abusive upbringing. After Reggie’s father passed away, a guilty Veronica gave Reggie a new car as a gift — and he hopped in it, with the ghost of Isabella in the back seat, and drove off alone.