Riverdale kicked off Season 6 with a sharp turn towards horror: Tuesday’s premiere introduced us to the town of “Rivervale,” where things were even weirder than usual. Jughead and Tabitha’s new apartment was infested with bugs, and Cheryl and her minions stuck a bunch of creepy dolls on sticks to scare off the rest of the town from getting into the maple syrup business. She threw her own maple harvest festival, where Archie won a bunch of competitions (of course), and that night, he was summoned to Thorn Hill, where Cheryl declared, “A sacrifice has to be made.” Archie was tied up and fitted with an antler crown… and Cheryl stabbed him dead and pulled out his heart to show the other townsfolk, who all seemed happy to see Archie meet his demise. (Oh, and Betty is pregnant with Archie’s baby?!?)

Once we picked our jaws up off the ground, we reached out to Riverdale showrunner Roberto Aguirre-Sacasa, who confirms that, yes, Archie is no more. (At least for the rest of the five-episode event that begins Season 6.) Plus, he sheds some light on how “Rivervale” works and what horror movies and books influenced the premiere — and hints that Archie’s not the only big casualty on tap. 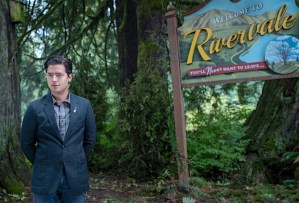 TVLINE | So what are the rules here? Is “Rivervale” an alternate dimension? Is it a dream? Do these episodes have lasting effects for the rest of the series, or is this a one-off event?
No, one of the things that we really worked hard on is to make sure that these five episodes… obviously, we wanted to make them as fun as possible, and we wanted to event-ize them and all that stuff, and we wanted a little bit of a clean slate and a fresh start with these episodes. But it was really important to make sure that they were what we call “in continuity,” meaning that things that happen in Rivervale would continue or echo or speak to the events of Riverdale. Every year, we start very disparate storylines, and we always try to weave them all together, and this year is no exception. I’m not going to speak to alternate universes or dreams or anything like that, but I will say that this is all happening, and we will play as though this is all happening, even beyond the first five episodes.

TVLINE | We pick up with the couples where we left off: Archie’s with Betty, Veronica’s with Reggie, Jughead’s with Tabitha. It seems like there would be some feelings about this, but does the “Rivervale” thing put a pin in all of that and they’ll deal with it later?
You’re right, we do sort of jump into that. I will say that Betty and Veronica, in an upcoming episode, do have a conversation about Betty and Archie, and Archie and Reggie have a conversation about Reggie and Veronica. So those are coming, even though they’re in the middle of the rest of their lives. But we do have those conversations, and we do track that. 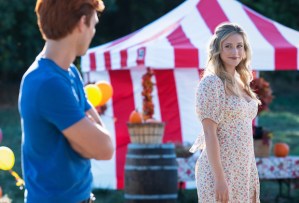 TVLINE | The maple harvest festival was giving me big Midsommar vibes. That movie must’ve been a big influence here, right?
Oh, for sure. We all love that. And for me, it even goes back further. One of my favorite movies is The Wicker Man… Everybody who knows me or has seen other stuff I’ve done, they know I love The Wicker Man. They know I love folk horror. I love the Shirley Jackson story “The Lottery.” It’s one of the classic small town stories, and I’d always wanted to do a version of “The Lottery” in Riverdale, because it’s such an iconic American small town where unspeakable things happen. It felt like, “Ooh, this would be really, really great.” We’re always talking about how Archie is sacrificing everything for the good of the town, and we thought, “OK, well, let’s make that literal.”

I also loved Children of the Corn, which is another folk horror movie. So all of those go in there. The great thing about The Wicker Man is this policeman goes to this town and is sort of a little bit sanctimonious, and he goes to an island and they sacrifice him. We loved the idea of Archie, who is such a Dudley Do-Right, he’s always trying to do the best thing and telling everyone how they’re not living up to the expectations of the town, we thought it’d be really, really funny to see the town get their revenge on Archie.

TVLINE | So is Archie really dead for the rest of the five-episode event, or is each episode a self-contained story?
No, they are serialized, so Archie is dead in Episode 2. And I’ll say this: That’s only the start of the body count for Rivervale.

Once you’ve recovered from all that, give the Riverdale premiere a grade in our poll, and grab a booth in the comments to share your thoughts.