Monday’s episode of The Voice marched the Top 10 up to the last hurdle they’d have to overcome in order to make it all the way to Season 21’s Semi-Finals. Or, in the case of Team Ariana Grande’s Jim and Sasha Allen, the last hurdle their coach’s fan base might have to help them squeeze under to advance.

Did the father/son duo — who are as lovable as their performances are uneven — manage to redeem themselves after swiping the Instant Save away from Team Kelly Clarkson’s (far) superior Gymani? Read on, and we’ll discuss not only their efforts but the whole Top 10’s attempts to do justice to numbers that were well outside their comfort zones.

The Best Hanukkah TV Episodes From Rugrats, Friends, The O.C. and More 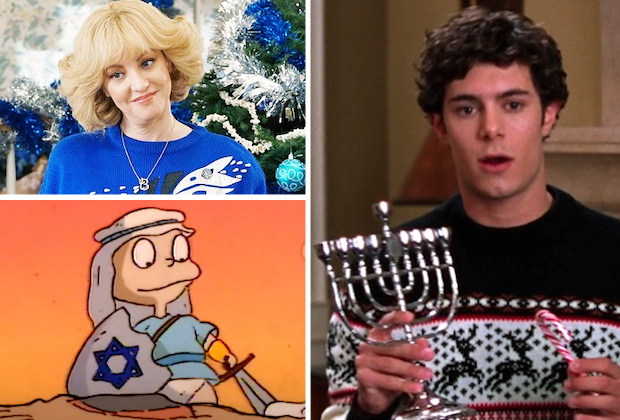 Holly Forbes (Team Ariana), “Last Dance” — Grade: D | “I’ve never sang disco before,” Holly admitted before rehearsal, “but I’m really excited.” Erm, me, less so. Had we really heard the kind of silkiness from Holly for which the Donna Summer classic begged? In the moment of truth, Holly started off pretty good, delivering a better modulated performance than I expected. But oh jeez. Once the disco beat kicked in, Holly went right off the rails. Pitch? What’s pitch? She was all over the map. Worse — at least for me, since I listen with my gut as much as my ears — she had as much oomph to her as I do when I’m writing a recap past bedtime. Painful.

Wendy Moten (Team Blake), “Jolene” — Grade: A | When Carson Daly announced that Wendy would be tackling Dolly Parton next, I might have said aloud, “Oh, thank God.” I really needed to clean out my ears after Holly’s crash-’n’-burn. Although how a country number was outside Wendy’s comfort zone is beyond me; we’ve all been told how much and how regularly she sings country. At any rate, when the spotlight fell on Wendy, who had a broken elbow and fractured hand after her tumble last week, she slayed vocally; she always does, right? And I wasn’t expecting her to bop around or anything, injured as she was, but an expression that didn’t make her look zombified would’ve gone a long way toward making her look like she was remotely invested in the song or the lyrics that she was singing. So I’m giving her an A, but to be clear, that’s for the vocal only. Performancewise, I kept waiting for Wendy to show up. 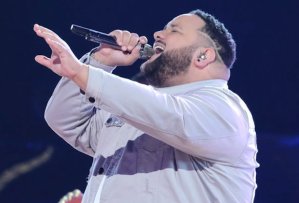 Jeremy Rosado (Team Kelly), “Freedom Was a Highway” — Grade: C- | In rehearsal, it didn’t sound like Jeremy was gonna have any trouble going country on his Jimmie Allen and Brad Paisley cover. As an added bonus, “I’m gonna try and dance,” Jeremy said. Mm… not sure how very necessary that was, but how’d it go? Overall, meh. The vocal was as off as it was on. At least he brought to bear a commitment and an energy that reeled me in. “Your voice was magical,” cheered his coach, making me wonder exactly what her definition of “magical” is.

Jershika Maple (Team Legend), “Ain’t It Fun” — Grade: A | Going pop-rock with a Paramore cover, Jershika sounded in rehearsal like “Ain’t It Fun” was gonna be a rhetorical question. On stage, jeez. She has all the in-your-face personality that Wendy lacks. With nothing more than the strength of her presence, she knocked me around the living room. And vocally, c’mon. She sounded like pop-rock was what she lived and breathed. I might’ve liked her to have more opportunities for a big showoff note, but this was super strong. 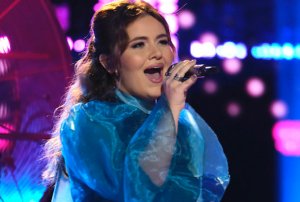 Lana Scott (Team Blake), “The One That Got Away” — Grade: C- | Though Lana was going to be covering Katy Perry, her instinct was to country it up. So erm, not sure how that forced Lana out of her comfort zone. Whether it met the requirements of the assignment, her rendition was… well, iffy at best. There was a lovely cover in there somewhere, but Lana kept bumping up against bum notes — like she was going for Y and stopped short at X. And the louder she got, the worse it got. I like Lana more than a lotta viewers/readers, but even I had to admit this was seriously lacking.

Joshua Vacanti (Team Legend), “If I Ain’t Got You” — Grade: A+ | Upon learning that he’d be trying to do justice to Alicia Keys, “I was terrified,” said Joshua. But he decided to give his performance to his wife as a kinda gift, with his coach as, I guess… the gift-wrapper? Despite his initial trepidation, he turned out a stunning performance that bordered (at least initially) on operatic. Dude has a voice that’s bigger than even his pants (billowing as ever). And there was zero searching for Joshua in his performance — he inhabited every moment. Quite remarkable, really, right down to the last note that seemed to keep going after everyone expected it to end. 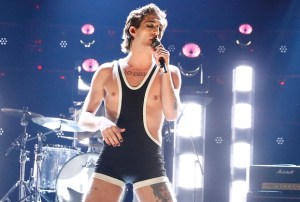 Måneskin, “Beggin’/Mammamia” | The winners of the 2021 Eurovision Song Contest provided a rollicking intermission to Monday’s show with not one but two numbers. The Italian rockers were wild and energetic, and let’s be real: Who doesn’t love a good onesie? Embarrassing confession, though: This was the first time I had heard Måneskin. I stopped paying attention to this year’s contest after the entry I worked on was eliminated in the first semi-final. Apparently, I really missed out. This was a blast and a half.

Jim and Sasha Allen (Team Ariana), “Stay” — Grade: C- | “Being saved by America was really shocking” last week, admitted Sasha in rehearsal. Yeah, we were all shocked, buddy. But it was a new week and a very different number, Rihanna/Mikky Ekko’s hit. Maybe they could knock this one outta the park? On stage, the father/son duo started off… aw, off. Sasha is as lovable as a box of puppies, but he has a subscription to pitch issues. His harmonies with his dad were nice, but even before Girl Named Tom came on, didn’t we all know that theirs would be better? Endearing people, mediocre singers. 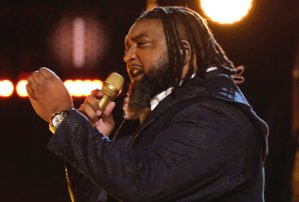 Paris Winningham (Team Blake), “Amazed” — Grade: C | In rehearsal, Paris admitted that this would be his first time ever singing Lonestar. He’d heard the number before, at least. And the combo of him, a country song and his coach’s voting base? That sounded like a winner even before Paris had sung a note. When he stepped up to the mic, he delivered a performance that… mm, did not leave me amazed. I want to say that it was classy and restrained, but for the most part, Paris seemed unsure. Though he came alive a bit toward the end, this was an unfortunate snooze — and a pitchy one at that. I expected a lot more from Paris, who was so affected by the emotion he’d put into it, whether we could hear it or not, that he had tears on his cheeks by the time he was done.

Hailey Mia (Team Kelly), “Peter Pan” — Grade: C+ | Before settling on Kelsea Ballerini’s hit, Kelly told Hailey that she ran through a long list of country songs that she realized too late were inappropriate for a 14-year-old. Not sure she quite settled on the ideal number, though. Hailey fell kinda flat on the verses, which gave me time to think what a cute Christmas tree her dress would make. (You saw it, too, right?) She had more oomph on the choruses, but the performance could’ve used an extra coat or two of polish. Not terrible but not good, either.

Girl Named Tom (Team Kelly), “Viva La Vida” — Grade: A | For their challenge, GNT took on Coldplay — a big leap. But, they said, they could handle it; they were, after all, supposed to be doctors before they veered into music. Thanks to Kelly’s coaching, their performance was filled to brimming with vocals that ached like a freshly stubbed toe. And wowza, the guys’ sister is just a superstar. Her voice cuts through the noise like the world’s prettiest-sounding chainsaw. I’m ready to call it, in fact: GNT will win Season 21. They have that enviable combo of talent and mania.

So, who rocked your world Monday night? Who do you think should be spending the evening packing? Vote in the polls below, then hit the comments.