Cue the music! (And no, we don’t mean the sorely missed Survivor theme song that used to play before every episode.)

Anyone watching this season knows that Shantel Smith’s self-made jingle is really the hot track of Season 41. But in the show’s Thanksgiving week episode, Smith (who was, without question, getting the strongest winner’s edit thus far) saw her torch extinguished after Ricard won immunity, prompting her four tightest alliance members to flip the script on her. (For a full recap, click here.)

So why didn’t she use her idol, what developments didn’t make the episode and how did the Mafia pastor’s congregation react to her dominating (and sneaky!) strategy? We asked her all of this and more.

TVLINE | You left with an idol in your pocket! Walk me through some of the emotions you were going through in the seconds following the torch snuff.
Right after my torch was snuffed, I was like, “You know what, Shan? Hold your head high. You freaking have MS. You lasted 18 days. You didn’t think you could last five! You were terrified to play this game. You represented. You had fun. You left it all out there. There’s nothing you would’ve done differently, so continue living your life!” I had a blast out there. It was super emotional watching the last episode. I wept so much. But it was a great time, and I loved every moment of it. I was in good spirits.

TVLINE | There was a lot of game talk about an all-Black alliance. Was that your ideal Final 4 scenario?
At this point, we had the numbers. We had the all-Black alliance, and we had Ricard. He didn’t have the relationships to go anywhere else at that time, so he really was a number for the four. Honestly, I loved him. I didn’t want to ever stop working with him. My dream world — which Ricard would never have let happen — was myself, Ricard, Liana, Danny and Deshawn for Final 5, and then Final 4, of course, us four [Black players]. I told them (and people will never believe this): “If we all get there together, take me out at four, but I just want us to all get there together. That’s my dream, that’s my hope, I love y’all.” That morning, Deshawn promised and swore on the culture that he was in for the mission. I said, “This is where my head is at too, and I know we’re having a hard time with our relationship, but I do want you to feel heard. I love you bro, you’re my family. Let’s get to the end and win this thing together.” But I think for him, he felt like if he was in Final 3 with me, he wouldn’t have won, and he’s probably right. It was a smart move for Ricard, and Ricard knew the person to go to to get that extra vote he needed. I never in a million years thought they would flip, and they did. That’s the hardest part.

TVLINE | Deshawn seemed to struggle with the communication between you two. Did you feel the same way, and are there any hard feelings? You did call him a snake on your way out!
First of all, I love that boy. There are definitely no hard feelings except for my own processing and emotional turmoil. I think they wanted to show, from Deshawn’s perspective, how he was feeling, and I totally respect that. I have thick enough skin to be able to handle that. But I definitely spent a lot of time listening to Deshawn, which is ironic because everyone’s saying my game started to dip when I stopped listening to people, but actually my game started to dip when I started listening to everybody more than I should have! I gave Deshawn Tiffany — I didn’t want to vote out Tiffany — but he wanted to protect Heather. I gave Ricard Naseer, because he was so upset that the extra vote should be ours to use as a team, so I gave it to him. I spent a lot of time listening to both of them.

Deshawn is a brilliant young man, but he’s also really sensitive. He’d often walk up to myself, Danny, Liana and Ricard and be like, “I don’t care who’s voted off, as long as it’s not me,” and he’d saunter off, and after he’d come back and say, “I feel like I’m not being heard!” At the end of the day, Ricard and I would fight a lot, probably a lot more than you saw on TV, but we were going to move together as a team. With Deshawn, a lot of it was out of place. I feel like it was coming from somewhere else, and that he used it as a reason to eventually vote me out. 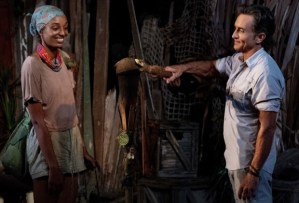 I went out there to play Survivor. I didn’t want to be a “Yes woman,” or a pushover. I didn’t want to be a goat to take to the end. I wanted to be someone who was driving the game, so I spoke my opinion and I strategized my little heinie off, and I played the game. I left everything out there. I really have no regrets about that. If I was anyone else, I might not be seen the way that I am, but because I am a woman of color, people will see that as I’m not listening, or I’m being aggressive, or I’m being bossy. It’s not that. I was a boss in the game because I wasn’t sitting down and letting people push me over. But I know who I am, and I was listening to Deshawn. Every time he felt I didn’t, I went and made amends with him. It is what it is. I still love him, so it’s all good vibes. That was a hard moment in the game, for sure.

TVLINE | Often in Survivor (and in real life, too), women are judged or vilified way more harshly than men, whether they’re mothers, teachers or religious players such as yourself. What has the reaction been like from your congregation?
Everyone from my congregation and my lead pastor released me to play the game. They were like, “Go play your heart out! This is what you want to do. We support you. We’re here for you!” My congregation knows who I am. None of them was ever like, “Oh my gosh, Pastor Shan! This is who you are? We had no idea!” I’ve spent enough time with them, so they know that I love hard, and have been so supportive. I’ve not gotten any backlash. If anything, they’ve been like, “You should’ve taken out Deshawn! You should’ve taken out Ricard! You should’ve been more cutthroat!” It’s so hard to be out there and play the game that I played, but I really love them because they released me to go play as a person and use the tools in my toolbox, and not have to worry about it. 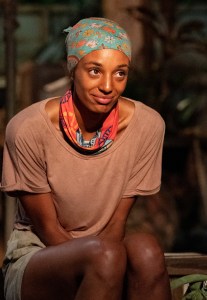 But I do feel like the only way to win in this game as a woman and have everybody love you is if you come across as having a soft power, which I don’t even know if that’s a real thing? Like, be who you are! I brought to this game all of my Italian-ness, all of my Jamaican-ness, all of my energy, all of my leadership skills and every tool I had from living on the streets, from being in a gang. I brought all of that. I was able to integrate myself into this game, and for that reason I make no apologies. I’m so thankful that I got to do that. It’s unfair to put women down because they’ve come to strategize and play. A lot of us aren’t incredible comp beasts. With women, we get out there and strategize and use our brains and make these relationships, and it’s knocked. I don’t understand! [Laughs] Ask any of my members, “Is Shantel a leader?” They’ll all tell you yes. That didn’t just come from the game, that’s who I am. The best players play this game how they live their life in real life, and that’s what I wanted to do.

TVLINE | Is there anything of note from your last day in the game that didn’t make the edit?
Oh my goodness, Nick! That day, I came back from the challenge and I hadn’t used the bathroom in like 18 days. I was with the medic that whole afternoon. I only had 10 minutes before Tribal to scramble on the beach, so I really wasn’t there that whole afternoon. But they took a shot at me! Good on them, because it was a good move. Listen, I was not going to take my foot off the pedal, hell no! So Ricard is brilliant, he’s amazing, I love him. It was the best move of the season, in my opinion.

TVLINE | Do you think you could’ve prevented your vote out had you not been tied up with the medic?
Nick, if I was not with the medic, I would’ve been reading the room, reading the energy. I was laying there, and at one point I turned to Liana and said, “Something’s not right,” and she was like, “You’re fine,” but I was really, really sick. When I got to Tribal, my Spidey senses were not going. Nothing was tingling. I was just focusing on getting through the night. If I hadn’t been sick, I’m almost certain I would’ve played my idol. But here’s the thing: What happened happened, and I’m not going to lose sleep over it. I just have to learn from it. Outlasting in Survivor is a part of it, and in that moment, I didn’t outlast. I was not well. You can only push yourself as hard as you can go, and I gave it all I had that day.

TVLINE | So if Jeff wants you to play again, are you picking up his call?
It’s too soon, it’s too soon! [Laughs] But if Jeff called me, yes, hell yes! But I don’t know, don’t call me for a year, maybe three or four years, because it’s just so much! But I love this game, and who knows what the future holds?