If it hadn’t already been established, Wednesday’s episode of Survivor proved there’s a looong way to fall from the top, even for the savviest of players.

After last week’s crazy double elimination, Erica tells us that getting Shan out might be easier said than done. “She has an idol. It’s almost like giving a baby a machine gun,” she tells us. “She can play the idol at any second, and you can get hit with a straight bullet and go home.”

Deshawn wants to keep his alliance with Shan strong, but acknowledges she’s smart enough to win the game. But Shan is nervous that Deshawn is talking to Erica, which means the trust between these two alliance members is shaky at best. However, Deshawn reassures her that he wants to stick with his fellow Black alliance members; he wants to do it “for the culture.” That said, he’s torn over his options of sticking by his supporters and fighting for his own personal well being.

REWARD CHALLENGE | No surprise here: It’s an obstacle cource followed by a puzzle. Jeff calls it the “best reward of the season.” The winner will go to a sanctuary where he or she will enjoy pizza under the stars and be given a shelter with blankets and pillows. Ricard gets to the puzzle first. While it doesn’t take long for the rest of the cast to catch up, Ricard is able to seal the deal and the eats. Jeff then gives him the chance to choose three people to join him, and he picks Shan, Heather and Xander.

SANCTUARY | Ricard tells Shan that people’s affinity for her gives him a great deal of pause. While he shows his reservations, Shan tells us she knows a man has a better chance of beating a woman in the end, which is sadly true if you crunch the numbers from the last 40 seasons. But hey, at least they’re both being honest.

Later, Liana’s in tears over her relationship with the resident pastor. The love she feels for Shan makes her want to sacrifice her own game in order to sit next to her. They exchange I love yous, as Liana tells Shan that people are targeting her ally Ricard. Shan then tells Ricard what she thinks is about to go down, and they in turn roll out a plan to cut Deshawn. Ricard and Shan know they’re both going to have to eventually turn on each other, but is now the right time? 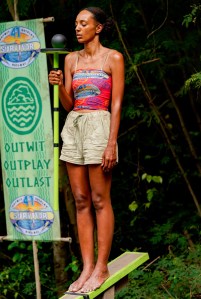 IMMUNITY IS NOW UP FOR GRABS | For the challenge, players must stand on a narrow beam while balancing a ball on a disc. As time goes on, they will move farther down the beam and will place their hands lower on the pole, making it more difficult. If the ball drops, they’re out. The last one standing wins the highly coveted immunity idol.

The last three remaining castaways are Ricard, Xander and Deshawn, but Ricard is the one to secure his safety. Looks like Shan’s allies are going to have to set their sights elsewhere.

With her ally immune, Shan wants to keep the waters calm, but Ricard decides it’s the ideal time to get rid of his BFF. He knows she has to go eventually, so why not now? There’s also much talk of trying to flush Xander’s idol in the process, but when Deshawn continues to lie to Ricard, it rubs the immunity-winner the wrong way.

THE TRIBE HAS SPOKEN | Erika and Heather tell Jeff they feel like they’re on the bottom but wonder if there’s opportunity to turn things around. Ricard comments on the elephant in the room and tells the group that he and Shan don’t have a Final 2, and that they’re using each other to get as far as they can. His statement triggers an alarm in others’ heads. It seems like this Tribal could go a million different ways. The only thing set in stone is that these castaways should brace themselves for yet another major blindside.

Everyone votes, but no one plays an immunity idol. Jeff tallies the results, and it’s a tie between Shan and Liana. The revote goes down and we see Ricard place his vote on his bestie Shan. Jeff reads the votes once again, and the axe falls hard on Shan.

Surprised the “Mafia pastor” bit the big one? Were you sold by the apparent winner’s edit she was getting? Tell us your thoughts in the Comments below!