While Harrison was being hailed as the savior of his high school for thwarting a potential shooting, Dexter’s suspicions over his son’s story led him down an unsettling rabbit hole. With the help of police photos and crime-scene spatter, Dexter deduced that Harrison was actually the instigator of the conflict, and later found what he believed to be the real weapon used on the teen’s classmate, Ethan: a straight razor — the same blade used by the Trinity Killer when he sliced up Rita and left her for dead. (Click here for a full Episode 4 recap.)

If Harrison does, indeed, have a dark passenger of his own, does that mean Dexter will take on the role of Harry and teach his own son “the code”? It’s possible, teases star Michael C. Hall.

“I think that possibility is a part of the fun and the richness of that relationship,” Hall tells TVLine. “There are opposing things that are happening simultaneously for Dexter when it comes to Harrison and the dark passenger. On one hand, it’s Dexter’s deepest fear that his son has the dark passenger, and on the other hand it’s his deepest wish, which makes parenting tricky.”

Considering that Dexter went into hiding to escape his dark, death-filled past, the emergence of Harrison “turns Dexter’s life upside down,” says showrunner and executive producer Clyde Phillips. “Dexter’s been living this abstinent, monastic, lonely life by choice, and suddenly here’s his son, who’s a young man filled with anger and issues of abandonment and pain, but yet, somehow is able to socialize.”

Any parent might be on the lookout for abnormalities in his or her child, but having both suffered bloody, traumatic experiences, Dexter’s “curious” (to say the least) as to what effect the past has had on the boy. 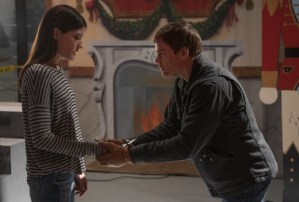 “There’s a phenomenon called inherited trauma, and Dexter has it,” says Phillips. “He wonders if Harrison has it, too, or if he was too young to remember. And we’ll learn the truth of what that is. Obviously, it’s the more entertaining truth. If Harrison had nothing and no memory, then we have no story,” he teases.

When Dexter pieces together that Harrison might share some of his more violent traits, the look on his face is… complicated. Is he frightened beyond belief? Relieved, maybe?

“As is always the case with Dexter, when presented with an either-or scenario — is it this, or is it that? — it’s usually both,” says Hall. “He’s experiencing a sense of horror and a sense of relief, and a sense of a wish being fulfilled, and a sense of the forbidden. It’s all of these things.”

Between Dexter’s return to his old ways and Iron Lake’s missing persons case (what is Kurt Caldwell up to at that cabin?), “Jim Lindsay” will certainly have his hands full for the remainder of the series. As for Harrison, what he remembers exactly, and what similarities he shares with his father will continue to be explored in upcoming episodes.

“We don’t know if it’s a dark passenger, but there is a darkness in Harrison that will emerge,” hints Phillips. “I’ll just leave it at that.”