This week on NBC’s La Brea… not a whole lot happened, really, ahead of next Tuesday’s season finale (at least not when compared to the previous episode). That said, we now know what needs to happen in the already-renewed drama‘s finale, lest Josh and Izzy go the way of Marty McFly’s siblings.

While Silas absconded with Isaiah after stabbing Rebecca, Eve got the full-ish download from Aldridge — that Isaiah is in fact young Gavin. As such, if the rugrat isn’t found and led into the portal that is opening up soon atop a mountain in Topanga, leading to 1988, Josh and Izzy will get very sick and die. (Paara later filled in a few other blanks, saying that Isaiah and Silas joined their village “a few years ago,” claiming to have come through a sinkhole and that the kid’s parents didn’t survive the fall.) While Eve and Levi brave a rocky stretch on foot, Josh takes the Jeep to the other side and at one point uses it to mow down a saber-toothed tiger that was about to pounce on Isaiah, whose grandpa went for a blueberry run. Josh wrecks the Jeep in the process, but he and Dad soon after meet up with Eve and Levi and continue the 10 mile trek to Topanga on foot. Eve at one point decides that Isaiah should know they are planning to pitch him into a portal, but the lad isn’t keen on the idea.

When they reach a deep ravine, Isaiah points out a handy, nearby rope bridge, but just as he and Eve make it across, Silas and some spear-wielding henchmen show up. Levi whips out a knife and cuts loose the bridge, keeping Eve and her pint-sized husband safe. Silas & Co. then take Levi and Josh hostage and demand that Eve meet them at the end of the ravine four miles east for a trade-off… or else. Eve and Isaiah soon run into Ty and Paara (who apparently didn’t need any rope bridge!), but the latter two soon enough head back to the clearing to get back-up. Eve waits long as she can, but as night falls she urges Baby Gavin to get himself to the Topanga mountaintop, while she races off to save her son.

Wounded Aldridge, meanwhile, convinces Riley and Sam to take her to their camp (“Everything I’m doing is to make sure Josh lives”), where she informs everyone about the upcoming portal to 1988. That triggers some debate about who is willing to return home now, albeit “30 years off the mark,” and who doesn’t need to see Die Hard in a theater or be subject to acute LGBTQ persecution. Rebecca then spots Lily, hands her a sheet of paper from a journal she found in Silas’ hut, and says there is something important she needs the little girl to do (more on that in a few)….

Also, Paara laid a big ol’ kiss on Ty after tending to one of his nosebleeds/learning of his prognosis…. Scott spotted a regular (albeith 16th Century?) cow, but when everyone else shrugged off the stoner (is that an “outdated term”?), Veronica helped him track down the animal and bring it back to the clearing/help their outcast status. Later, Scott discovered a bar code etched behind the cow’s ear! 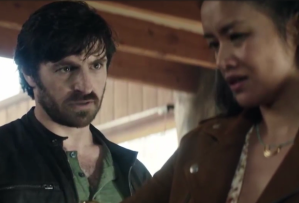 Ella-the-artist found Gavin and Sophia on her property but didn’t believe the wild sinkhole story. Gavin (quite easily) sneaked onto the super-secure dig site to find a rock that Ella had done a painting of, to prove his point. Handed the rock, Ella recalled seeing Rebecca Aldridge once before — back when she was called “Lily,” down in 10,000 B.C. Ella brought out the clothing she had on the day she was found by the Topanga couple, and in a pocket was a paper Rebecca had given her to safekeep. On it was a crude map of the West Coast and the known sinkholes/portals, including one in Seattle that is about to open and lead to Oct. 6, 2021….

So, are we to believe that Ella is from 10,000 B.C…. made it topside as a tyke to meet Veronica and Aaron (as Lily)… then fell back into a sinkhole… and now must return… in order to grow up as Ella/get the map to Gavin? 🤯