For a network executive whose entire job revolves around monitoring a daily schedule, it’s kind of wild how bad Cory’s timing is on The Morning Show.

Exhibit A: His earnest declaration of love to Bradley as the pair search for her missing brother in an encampment of unhoused people at the dawn of the COVID-19 pandemic.

The moment was chaotic; at first, the UBA bigwig was going to admit that he engineered the tabloid report that outed her and Laura as a couple. But when Bradley gently told him there was nothing he had to confess, because she trusted him, he went for it.

“I love you,” Cory told Bradley. And though he intitially soft-peddled it a little, he seemed to change his mind right after. “You know what? F—k it. I want that recorded in the annals of time. I don’t know what’s going to happen, OK? Now the universe knows that I said that. I really love you. I love you.”

In a moment, we’ll run down the other big stuff — including Alex’s big broadcast — that happened in Episode 10, “Fever.” But first, let’s hear what stars Reese Witherspoon and Billy Crudup had to say in separate interviews about their characters’ big, potentially game-changing moment near the end of the hour.

TVLINE | Cory says a lot of things to a lot of people this season, but I don’t think anything makes more of an impact than his telling Bradley he loves her at the end. On his BS meter, where are we? Is he completely earnest? Is there a game going on there? Somewhere in-between?
CRUDUP | Oh no. Certainly, the way that I felt it was written and the way that I played it was that was as close to being at the core of his being as maybe he’s capable of exposing. I do think that, despite his duplicity and the way in which he navigates the business world, there’s an authenticity in that insofar as the entire environment is inauthentic, it’s all a construct of people wielding their power in ways that are unpredictable so that they might continue to hold power. So if you want to be a part of that system, you have to speak that language. 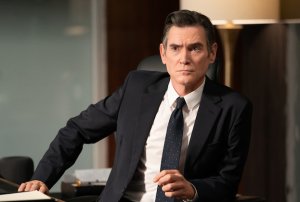 That being said, it’s great to see that Cory has a connection with a human being that is almost beyond his comprehension. The way that it was written, it was such that he was trying to describe a feeling that he had never been able to put his finger on. [Laughs]  Like, “What is that feeling? Oh, I think it might be love.” That’s a very strange feeling for a person like me to have, but it’s beautiful to see it articulated the way that they wrote it… I’m happy to hear that it has an impact, because it certainly had an impact on me playing it. I loved that he had an opportunity to express that kind of connection, and it only raises the stakes for him wanting to succeed.

TVLINE | Reese, we don’t get to see Bradley’s reaction when Cory tells her he loves her; she gets the call about Hal being in the emergency room right afterward. And she’s still technically dating Laura. When she does have a moment to think about what’s transpired, what do you think will run through her head?
WITHERSPOON | Bradley has this incredible chemistry with Cory, and they always have, but they have this workplace dynamic where he’s always her boss. So with everything so complex at the studio and at the network, she can’t even explore that, and I don’t think he can either. So it definitely is setting up an interesting triangle between Laura, Bradley, and Cory.

In addition to that big Cory/Bradley moment, the finale also featured the following developments: 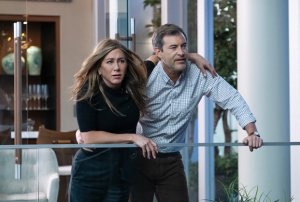 * Alex was diagnosed with COVID-19, causing a freak-out among the show’s staff when they realize they’d all been exposed. Chip spent a lot of time on FaceTime with her as she worried that she’d die alone; meanwhile, the network moved to investigate her based on the claims raised in Maggie Brenner’s book.

* Chip pitched Cory a UBA+ broadcast about watching Alex fight her way through COVID in real-time. The exec reluctantly greenlit it, and when Chip went to Alex’s to produce it, she worried that she’d get him sick, too. But he said he’d already tested positive (we later learned that was a lie), so he had a front-row seat to Alex’s on-air ruminations about what matters and what doesn’t. “I’m done apologizing for myself,” she announced to whomever was watching. “Either get on the Alex Levy train, or stay at the station.” 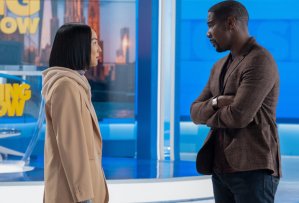 * Daniel quit UBA and drove across country to see to his grandfather, who was at a facility where one of the nurses was ill — likely with COVID. Mia called to try to lure him back to the network, but he steadfastly refused to return to a place where he’d never have a meaningful seat at the table.

* Right around the time that Tom Hanks and Rita Wilson came down with the ‘rona, the UBA launch event was cancelled — which wasn’t great news for the nascent streaming service. On the bright side, though, Paola showed some of her documentary to Cory and he was intrigued.

* Bradley eventually found Hal in an emergency room that was packed with people trying to get seen for COVID-19-related problems. As Cory stood in the waiting room, he seemed to realize what a rough situation the world was heading into.

Now it’s your turn. Grade both the Morning Show finale and the season as a whole via the polls below, then hit the comments with your thoughts!