Several familiar faces are headed back to The Game, but Tasha Mack’s bestie isn’t one of them.

TVLine has exclusively learned that Brittany Daniel will not be dropping by the Paramount+ revival as previously reported. The actress, who was set to make a special guest appearance as Kelly Pitts, won’t reprise her role this season after welcoming a daughter in October.

“As the wise saying goes, ‘When we make plans, God laughs.’ Our sweet baby came early so Kelly Pitts had to sit this season out. I hope everyone enjoys seeing my dear friends back on the field,” Daniel said in a statement to TVLine.

Showrunner Devon Greggory added, “Although we will miss Brittany and her portrayal of fan favorite Kelly Pitts, we wish her, Adam and baby Hope Rose, all the best.” 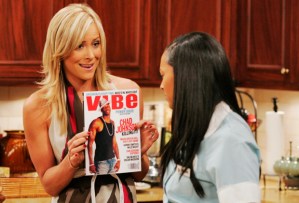 Kelly Pitts might be sitting this one out, but her daughter Brittany (played by Adriyan Rae) will still get to see one parent in the revival.

Walker’s Coby Bell, who played the comically frugal ex-footballer Jason Pitts in the original series, is still slated to appear. Perhaps he can help Brittany get her finances straight?

The Game, which is now set in Las Vegas, examines Black culture through a football lens as the show’s main players grapple with “racism, sexism, classism” and more while also fighting for “fame, fortune, respect and love,” per the official synopsis.