William Jackson Harper has never set out to be the leading man. But that’s exactly what he is in Season 2 of HBO Max’s romantic dramedy Love Life.

Instead, Harper says, he took the role of book editor-turned-author Marcus Watkins because he’s a complicated character.

“If the role is interesting, I’m down to try it,” Harper thoughtfully tells TVLine. “I watched the first season, and it was really nuanced, and the way certain relationships fell apart felt familiar. When [series creator] Sam Boyd approached me about Season 2, I said yes because it sounded like a fun challenge. I wanted to see if I could do it. And trust me, by ‘challenge,’ I don’t mean I was like, ‘I can’t wait to show people.’ I just wondered if I was up to it, and I really wanted to give it a shot.”

The end result is Harper playing a Black man in New York navigating all sorts of relationship pitfalls. This includes destroying his first marriage to a white woman named Emily (Maya Kazan) after falling hard for his perceived soulmate, a Black woman named Mia (Jessica Williams), and having an emotional affair. The two eventually get married. 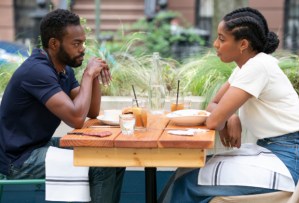 But the road from Emily to Mia is stacked with self-discovery, missteps and failed love connections. Marcus also has the occasional one-night stand, which left his portrayer vulnerable in every way, Harper says.

“Getting naked was the biggest challenge,” he shares with a laugh. “I’m scared of that at all times. In all seriousness, I had to physically disrobe in some scenes, but also dive in and really follow Marcus’ story and aspects of his life, which means I’m on screen most of the time. So the schedule was pretty demanding. Artistically, there was also a lot of navigating to understand why Marcus does the things he does.”

Harper says he even related to Marcus when he tells Mia in the finale that he has spent a good chunk of his life shielded by a facade.

“There’s a degree to which I’m always hiding,” Harper confesses. “I certainly don’t say everything that’s on my mind, simply because I don’t want to ruin my own day. Everyone puts on a facade to a certain degree. But some of us put on more of a facade to survive. Marcus is such a sensitive dude with negative impulses that he doesn’t like, so he hides a lot. As you get older, you confront those things and come to the truth of who you are.” 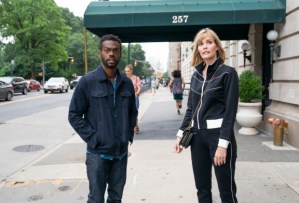 This includes Episodes 5 and 6, where Marcus accidentally impregnates a well-heeled white woman he casually has sex with named Becca Evans (Leslie Bibb). The exploration of their unplanned mistake, as well as Becca’s choice to keep the baby until it’s biologically impossible for health reasons, are all provocatively approached through the prisms of race, class and gender.

“There was a lot of back-and-forth on that among all of us,” Harper divulges. “We had to ask what we wanted the audience to feel. Selfishly, I wanted viewers to be on Marcus’ side, but all of his suggestions weren’t OK. Maybe Becca said some things that weren’t right, but so did Marcus. It was just human and messy. These are the situations that show people at their worst or at their best, and in those episodes, you saw two people bring out some real nastiness in each other.” 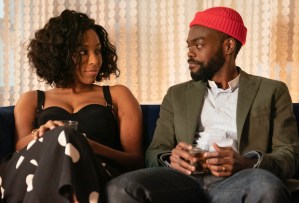 Although the outcome is different than, say, the characters of Lawrence and Condola on HBO’s hit rom-com Insecure, Love Life‘s candid exploration of unpredictable pregnancies garnered natural comparisons between the two shows. Harper, in turn, says he’s flattered because it means his show did something right.

“That is the biggest compliment anyone could say,” Harper humbly adds. “To be compared to Insecure in any way, because it’s a phenomenal show, is great. But this isn’t ‘Insecure for dudes,’ and I’m not the male Issa in New York. That said, like Insecure, we did some honest work, we did our best, and the success of an amazing show like Insecure definitely paved the way so that we could.”

What did you think of the way Love Life Season 2 dealt with race, love, class, identity and fidelity? And do you want to see William Jackson Harper lead a series again? Drop your thoughts in the comments.