Pass the cranberry sauce, ’cause Thanksgiving came early to Grey’s Anatomy Thursday in an episode that found Meredith stuck in Minnesota on the holiday, Nick riding to the rescue in the sexiest possible way, Link and Amelia playing Ozzie and Harriet, and Megan being served a heaping helping of heartache. Read on, and we’ll go over everything that was on the menu.

‘I CUT ON THANKSGIVING, JUST NOT A TURKEY’ | As “Every Day Is a Holiday (With You)” began, Amelia was exchanging texts with Kai while prepping to perform a complicated procedure on a turkey at Mer’s, Nick was dropping Mer at the Minnesota airport and trying to convince her to spend Thanksgiving at his cabin instead of flying home to Seattle, and Levi was telling Nico that he was sure he was about to be chosen to be chief resident when… surprise! His mom arrived with Thanksgiving dinner for him to eat on breaks. (Do residents get breaks?) Elsewhere in Grey Sloan, Bailey explained to Richard that was she was working on Turkey Day since baby Pru had been taken by her grandfather. For his part, Webber was just looking forward to carving a patient instead of a ham. And it looked like he might get the surgery he was looking for, too, when a pregnant woman named Ashley pulled up to the ER entrance and puked at his feet. Finally, Owen volunteered to bring dinner to Farouk’s room to celebrate the holiday with him, Teddy, Cormac and Megan. 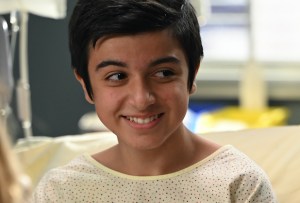 Before Owen could go home to turn on the oven, much less baste, he was waylaid by Noah’s arrival in the ER with a collapsed lung. Mind you, the patient’s main concern was that Hunt take his son somewhere to get his mind off the life-or-death drama playing out. Owen’s solution? Burgers in an empty room. And it worked — to a point. There was no consoling Noah’s wife, however. So Bailey took her aside and let her break down privately. Nearby, Megan, Teddy and Cormac played Monopoly with Farouk. Megan was particularly amused by the fact that Hayes called game night games night. (Just admit Megan and Nathan are over already.) Alone with Megan, Teddy admitted that she was avoiding her mother-in-law for fear of her reaction if Leo came out in another dress. Suddenly, Farouk’s monitor started bleeping furiously. They couldn’t get his heartbeat back. Their only option, Cormac argued, was to… well, honestly, I didn’t quite understand what they were doing medically. But it would keep the boy alive. 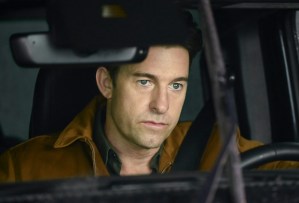 ‘YOU’D HAVE TO TURN THE OVEN ON FOR IT TO BURN’ | After Mer’s flight was cancelled, she called Amelia to lament how much like her mother she was: She’d be spending Thanksgiving in a hotel room. When Link arrived with Scout, Amelia informed him that Mer was stuck out of town, as were Winston and Maggie. So she was in charge of dinner and the kids. Not anymore, said Link. He would pitch in with the cooking and hang since he didn’t have any other plans. They might as well figure out sooner than later how to be coparenting pals. And though dinner didn’t exactly come off — Amelia forgot to turn on the oven — their afternoon seemed like a success. Link cheerfully suggested that they treat the kids to a traditional supper of mac and cheese. Supper was going swell, too, when Bailey blurted out, “What’s sex?” Afterwards, Amelia was visibly charmed by the dance party that her ex had with the kids. (It would’ve been hard not to.) 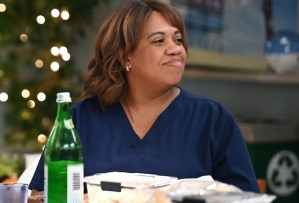 At the same time, as Nick drove to his cabin, Mer kept him company on the phone. Somehow they managed to make even a conversation that included talk of a patient’s severed finger turning up in a gravy boat cute and flirtatious. When at last Nick said that he was nearing the cabin, there was a knock at Mer’s door. Guess who! He’d turned around and come back. As snow fell romantically outside the window, the two bonded further over “being in the moment.” Mer had gotten better at it since her COVID battle, she said. She was grateful that he was there. Oh, and for the wine. But that went without saying. Later, she noted that he’d said Charlotte and surgeries were his priorities. As in past tense. “Priorities can change,” he noted before kissing her in such a way that it was clear she had become one. With that, they made their way toward the bed, clothes were strewn about, and presumably, a very, very happy Thanksgiving was had by all. 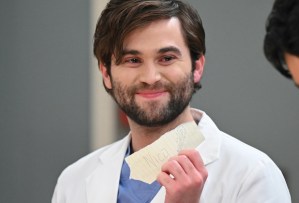 ‘NOTHING LIKE A THANKSGIVING KUGEL’ | At Grey Sloan, Ashley was checked out by Jo, Richard and Levi. She didn’t want to worry her husband by calling and interrupting dinner, though. Soon enough, he wound up in the hospital, anyway. Ashley had to undergo surgery and might need an emergency C-section. Before being wheeled into the ER, the mother of several asked Jo to tie her tubes while she was in there. Shortly, an emergency C-section was performed, and Ashley kept right on bleeding. An emergent hysterectomy was required, Jo explained to her husband, who was full of regret that Ashley hadn’t been able to tell him that she’d wanted to be done having kids. As the episode drew to a close, Levi’s mother shocked Nico with marriage talk. She was even starting to pick out baby names for Schmico. (Cue Nico’s panicked expression in 3, 2… ) 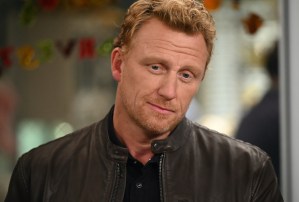 Noah asked Owen how much longer he’d be putting his family through this. “It’ll be over soon,” Hunt promised. Off that somber exchange, he learned from Teddy that Farouk had had to be put on the heart transplant list. Finding Bailey crying, Richard got her to open up about her grief over Pru. “I just want to hold her and tell her everything’s gonna be all right” — which she might not even get to do again. Back at Mer’s, Amelia assured Link that he was nothing like his parents, and they fell into a steamy kiss… which she made clear hadn’t changed anything for her. Nonetheless, they appeared to be going to go at it. Mer and Nick were all but glowing after their nookie. And at the hospital, Richard celebrated the fact that he, Bailey, Levi, Nico and Jo were together. “I am thankful that this year we had more saves than losses,” Webber said, “and that we are still here.” Amen.

So, what did you think of Grey’s Thanksgiving episode? Hit the comments.