If the remaining Survivor 41 players thought the merge would give them more room to hide, well, they thought wrong.

Wednesday’s immunity challenge split the group into two small teams of five, and after immunities (plural!) were doled out, those teams stuck together for the remainder of the night. And in pure 41 fashion, another twist sent both teams to Tribal Council to eliminate a castaway. With two individual immunities awarded, plus hidden immunity idols and extra votes lurking about, who successfully navigated the week’s many obstacles, and who saw their dreams go up in smoke? Let’s recap.

Last week’s messiness has Deshawn all stirred up. Not only is he irritated that Heather tried to switch up the plan at Tribal, but he didn’t appreciate Shan trying to bulldoze the situation, either. Shan’s also miffed that Deshawn got his way that night, but as D explains, he didn’t want to haphazardly make a decision that wasn’t fully thought out. The next morning, Shan and Deshawn apologize to each other, but as we see Deshawn buddying up to Evvie, he tells us he’s more than happy to play the middle.

Later, Danny, Deshawn, Liana, Shan and Ricard decide to talk in private… but they announce their shadiness with Erika and Xander in earshot. As the five confer about not trusting Erika, Xander wonders if they should form a voting block with the remaining stragglers. If they want any shot at breaking up the majority alliance, they’d better get to it.

IMMUNITY IS BACK UP FOR GRABS | For the challenge, players must balance on a narrow perch while gripping a handlebar behind their head. The tribe will be split into two teams, and the last person standing for each team will win immunity. On top of that, each team will go to Tribal Council separately, so two people will be leaving the game tonight. A reward is also up for grabs: The last person standing overall will win chicken and beef stew for his or her team.

Erika, Shan, Ricard, Naseer and Heather make up the yellow team, while Deshawn, Evvie, Liana, Xander and Danny are blue. Pain quickly washes over everyone’s faces, and in just 10 minutes’ time, half the castaways are out of this competition. Erika and Naseer are the last two for yellow, while Deshawn and Xander stay strong for blue. Erika wins immunity, but can’t hang on long enough to fight for the food. After 33 minutes, Xander wins both safety and the grub. 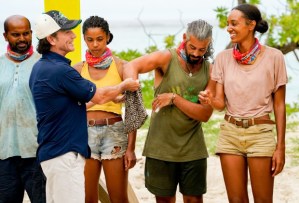 STRATEGY | Immediately after the challenge, the tribes are sent to different beaches. Evvie and Xander view Liana as Shan’s minion. Plus, Xander knows Liana is targeting him, so it seems like a win-win to chop her. But Liana knows Xander has an idol, and he straight up tells her he’s considering giving it to Evvie. Then, Liana strangely asks Xander if she could hold on to his idol, and seriously, what is this girl thinking? She tried to steal the dude’s idol just two episodes ago! She’s the one that drew the line in the sand between them, and now she’s asking for a sign of his trust? Sure, Jan.

Xander tells Danny and Deshawn that Liana was floating Deshawn’s name, but Danny’s wishy-washiness scares him. “Maybe I should play my idol for Evvie, because this Tribal is crucial for the rest of my game,” Xander tells us.

On Erika’s team, Naseer, Shan and Ricard feel pretty good about voting Heather off, so much so that Naseer straight up tells Heather he’s sorry she has to go home. While things aren’t looking good for the stay-at-home mom, Erika tries to come up with a Plan B to save her friend, but unfortunately, she knows she’s contending with two idols and an extra vote advantage.

While things don’t look great for Heather, Ricard approaches Erika and Heather with a lifeline: He doesn’t like the fact that too many idols are in play, and he wants to vote with them to cut Naseer and flush his idol. Shocker: Shan doesn’t agree and still wants Heather out.

TRIBAL COUNCIL #1 | Heather tells Jeff that she understands she’s the easy vote tonight. With no advantage in her pocket, she’s more or less a sitting duck. But the problem, as Erika explains, is that everyone knows exactly where the advantages are. Jeff asks the magical question I’ve been asking myself for weeks now: “Why does everybody know what everybody has?” (Of course, part of that answer is because of the dumb secret-phrase advantage, which really is all Jeff’s fault. The other half of the blame goes to this cast’s “mouth-arrhea” as Tiffany explained to TVLine last week.) Naseer says it’s been a hard day. He respects Heather and says he’s learned a lot from her, but despite the positive feelings and friendships at stake, it’s time to vote.

When Jeff goes to tally the votes, no advantages are played. Shan plays her extra vote (oddly using one vote on Heather and the other on Naseer), which gives us a 3-3 tie. After the re-vote, Naseer becomes the night’s first victim.

TRIBAL COUNCIL #2 | The second group responds to Jeff’s questions with extreme caginess, prompting the host to ask them how comfortable they’re feeling. Everyone says they’re pretty confident that what they planned to do will actually go down. (Seems someone’s in for a big surprise!) When it’s time to vote, Liana and Evvie both vote for each other, but the rest remains a mystery. Jeff calls for advantages, and once again, nothing is played. The night’s second eliminated castaway: Evvie.

Surprised by tonight’s outcomes? Who do you think is in the best position right now? Drop your thoughts in a comment below!