If you’ve watched even a couple episodes of Survivor 41, you’re well aware that there’s a bajillion advantages floating around, just waiting to destroy dreams. So why aren’t these armed and dangerous players being targeted?

“Isn’t that a great question? When you find the answer to that, let me know!” the game’s latest victim Tiffany Seely jokes to TVLine.

In yet another disorderly, whisper-filled Tribal Council, no one seemed to care about Xander, Shan and Naseer’s arsenal of Survivor weaponry, instead opting to cut Seely despite her lack of numbers and powers. (Click here for a full recap of Episode 8.)

Here, Seely talks to TVLine about the broken trust between the former Yase members, plus the season’s “shortsighted” gameplay and “mouth-arrhea.”

TVLINE | The episode made it seem like all trust had been lost between the former Yase members. At that point in the game, was that true?
The reason trust went out the door with Liana was not because of me, but because she lied to me after she went up to that mountain. She was supposed to give that advantage to Shan to build trust with us, so we could work together with Ua when we got to the merge. She didn’t do that, but did tell Shan how close she was with us, so of course Shan’s gonna mention it in front of me. She didn’t know it was a secret. So that comes out, and Liana’s pissed at me. That’s absolutely cuckoo. What the hell? You lied and didn’t do what we asked you to do, and now you’re coming after us? From that point on, that was it for Liana. She flipped the minute we got to the merge. It was a nightmare.

Evvie and I were ride-or-die, no matter what you saw. There was always trust there. We were one hundred percent in each other’s corner the entire time. When I found out about [Xander’s] advantage and told Evvie, she and I masterminded the plan to give it to me because everybody would know if he gave it to her because they were closer. [Evvie has previously stated that their pronouns are they/she.] And guess who got credit for it? At the end of the day, I don’t know if Xander was just really shortsighted and wanted props for things, or if he was getting annoyed that Evvie and I were in lockstep… who knows? It took a lot for me not to use the idol on Evvie because she was my everything in that game. I showed Xander loyalty, and the minute I gave it back to him after, he never spoke to me again. That was it.

At [this week’s] Tribal, I got up to talk to Xander because I was ready to flip that game upside down, and he refused to speak to me. I needed to survive this one night, and I was going to go balls to the walls when we get back. I would’ve used my Shot in the Dark, but it was so fractured at that point and so messy that I was like, “I’m going to be a Sydney and vote myself out with this thing.” Then Heather trying to save me, but writing my name down? It was a mess and a s–tshow.

TVLINE | It seemed the other players didn’t buy the fact that Yase was actually fractured, is that right?
Yeah, they were not buying it, and it was so weird because we were only three to their eight. They could’ve picked one of us off any time they wanted. Use us as a number to further your game! There were a lot of people not being strategic and just listening to the boss, who in some cases was Shan and in others, Deshawn. There was no rhyme or reason. What a s–t exit with nothing flushed. That, to me, is a Survivor nightmare. 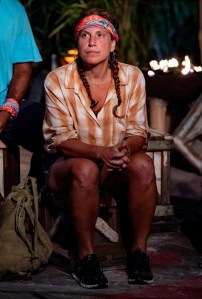 TVLINE | Why didn’t anyone want to take a shot at one of the three players holding idols? What was the hesitation there?
Isn’t that a great question? When you find the answer to that, let me know! Is that not the stupidest s–t ever? I was like, “Are you f–king kidding me?” Take me out, but take me out with dignity, and flush somebody’s freakin’ idol. It was terrible.

Furthermore, Xander should’ve used his idol on me! We would’ve turned that game upside down. He didn’t vote for me, so use your idol on me, and then we’ll have the numbers. He had an extra vote, me, Evvie, probably Heather and Erika if we needed. It was just not smart. None of them knew what the hell was going on. To go out like that is sucky. I could’ve thought of a zillion other ways to do this, but nobody would talk to us that last day. Evvie and I were blackballed. It was a horror show.

TVLINE | Why couldn’t anyone keep their mouth shut about their advantages? It seems everyone’s business has been out in the open all game long.
I kept saying to Evvie: Why, in this game, this year, are advantages keeping people in the game? Usually, you’re a target. This time, it made you a number. I knew what everybody had. They all had mouth-arrhea, all running around telling each other. Shut your mouth! Obviously, the one where people are saying those phrases… how long can that stay under wraps? That’s stupid, dude. A lot of these advantages and a lot of the gameplay, I’m going to be honest, can be chalked up to luck. It became a lot of luck versus strategy, and I think that threw a lot of the players and made them forget about idols being scary in the game. Everybody was just like, “What’s going to happen next?” I’ve never seen a Survivor where idols and advantages don’t make you a target. Are we playing the same game? I can’t.

TVLINE | There was so much scrambling this week! Is there something you can share from either camp or Tribal that we didn’t see in the episode?
Everybody was fighting. You could see heated arguments in corners and people pleading their cases. I was walking around trying to talk to every single person, and they wouldn’t talk to me. I cannot believe they didn’t show this, but I had such a great plan to pitch to Xander that I know would’ve flipped the whole game, but he wouldn’t talk to me. Plus, Liana was following us around like a puppy. You didn’t see me pleading my case out there, but I was.

TVLINE | Who do you think is currently the biggest threat left in the game?
That’s a hard question, but I think anybody with idols. As a viewer, I would’ve been like, “OK, these people holding idols need to go.” I think that’s the sentiment across the board. I can’t wait to see what happens next week. The lines were drawn for this one, and I think people are pissed. It’s going to be interesting to see what happens next.

TVLINE | Any regrets or anything that could’ve possibly saved you?
Honestly, I don’t think there was a single thing, other than no rock draws or a normal merge, that would’ve saved me last night. I played my heart out out there. I wish I would’ve known it was this type of game. I went into Survivor playing the game I’d watched all of these years, and I didn’t get to play that. I think I would’ve won with my social game. I really do. I would’ve brought it!