Sometimes, just the looming threat of idols and advantages is enough to throw everyone in a tizzy. In Wednesday’s episode of Survivor, none of the bonus goodies were actually played, but that didn’t stop the swirling paranoia from messing with the players’ minds.

Despite having survived the madness of last week’s Tribal Council, trust among the former Yase members appears to have been completely destroyed. Evvie and Liana seem kaput, while Xander considers cutting ties with both Tiffany and Evvie. While Evvie embarks on a “relationship recovery tour,” they tell us via interview that they think Yase is done for good. As for Deshawn, he knows the Yase tribe targeted him last week, and he wants all of them out ASAP.

REWARD CHALLENGE | Before the tribes come in, we watch Jeff hide an advantage underneath the sit out bench. For the challenge, players must leap off a ramp, dive down and release puzzle pieces. Once all pieces are collected, teams must pull themselves by a rope to the finish and construct a puzzle. The first team to finish wins grilled cheese and chips back at camp.

They pull rocks for teams, and Erica pulls the only gray one, which earns her a spot on the bench. But before she can actually sit out, Xander offers to switch spots with her, unknowingly robbing her of the chance to find Probst’s hidden treasure.

Both teams are neck-and-neck in the challenge, but once they get to the last stage, Evvie remembers the pyramid puzzle from the Edge of Extinction season. They make quick work of the puzzle, and the blue team wins the grub. Xander, meanwhile, fails to find the advantage hidden right under his nose.

CAMP | The losers take the loss hard, and their hunger brings Shan and Liana to tears. But while Evvie and their crew are feasting away, Shan uses it as an opportunity to throw Evvie’s name under the bus. She also attempts to recruit Xander, but is her plea enough to get him on her side?

IMMUNITY IS BACK UP FOR GRABS | Players must balance on their toes with a block of wood wedged between their head and the top of a wooden frame. If the block drops, they’re out. Last one standing is safe at tonight’s Tribal.

Before they start, Jeff offers up a tasty temptation: One player can opt out of the challenge for a single portion of rice. However, if the group decides to sit out multiple people, he’ll give the tribe a bag of rice that will feed them for three days. But: They need to negotiate how many castaways will sit out. After some back-and-forth, Jeff and the group agree that five is the right number. Shan and Naseer volunteer themselves, but when no one else bites, Xander renegotiates their deal to four people. Jeff agrees, and Xander and Ricard both step forward, thus banking the rice for the tribe. 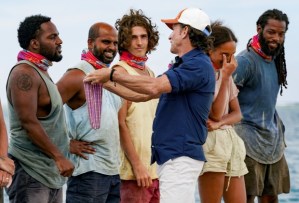 Those actually participating in the challenge drop like flies, leaving Liana, Evvie and Heather as the last three standing. Only minutes later, Evvie wins the coveted immunity necklace.

STRATEGY | Evvie’s win thwarts the majority’s plan, leaving them to scramble for a Plan B. Shan, Naseer, Danny and Ricard talk about flushing Xander’s idol and cutting Tiffany in one fell swoop. But when Danny pitches splitting the vote between Tiffany and Naseer instead, it falls on deaf ears. Shan fails to even acknowledge the idea, which seems to rub multiple people, particularly Deshawn, the wrong way. Names start flying left and right, which makes Tiffany’s paranoia skyrocket. When Heather’s name starts getting dropped, she’s annoyed with Shan for even floating the idea of using her as a decoy.

TRIBAL COUNCIL | Based on last week’s ousting, no one feels safe, and rightly so. Danny tells Jeff that after last week’s scramble, Xander, Evvie and Tiffany are acting like they’re not an alliance anymore, but he doesn’t know what to believe. Evvie then confirms to the group that the Yase three are merely individuals now. But are they telling the truth?

Just as the group is about to vote, Heather tells Jeff she needs a few minutes. She gets up, and once again, Tribal transforms into a swarm of whispers. Heather wants to change the vote to Naseer, and shortly after, no one seems to know WTF is happening. Deshawn doesn’t want to deviate from the original plan (whatever that may be), which again makes him lose patience with Shan for trying to tell him what to do. Someone suggests changing the vote to Heather (which would be crazy if she talked her way right out of this game), while Ricard urges Xander to play his idol.

Things quiet down, and everyone votes. When Jeff reads the results, zero idols or advantages are played. Tiffany is then shown the door with five votes to her name.

Are Shan’s days on the island numbered? Glad Evvie survived another week? Drop your thoughts in the Comments below!