Anyone who has been following the news knows that the Sackler family faced little to no legal retribution when it came to holding them, and their company Purdue Pharma, culpable for America’s opioid crisis.

While the finale of Hulu’s limited series Dopesick made that fact abundantly clear Wednesday, the closing installment also emphasized the billions of dollars the OxyContin manufacturer has to pay in settlements.

The fact that the Sackler family name was removed or rejected when it came to museums was mentioned, as well as other acts of public shaming they were met with, including forfeiting their company.

Best of all, Dopesick celebrated the tireless work of AUSAs Rick Mountcastle and Randy Ramseyer and their boss U.S. Attorney John Brownlee. One of the most thoughtful scenes came during Episode 8’s final moments, when DEA Deputy Director Bridget Meyer dropped by and commended Rick and Randy for trying to take down the Sacklers of the world, despite the result not being what they’d hoped.

“Here’s to the ones who fight the battle, even if they don’t win the war,” Bridget said while raising a cup of sparkling cider (because Randy and Rick don’t drink alcoholic beverages). 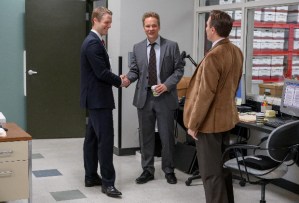 Bridget went on to say that in her heart, she believed the Sacklers would pay for their sins someday. But Rick kept it real with a heartfelt “nah.” And given the immunity from opioid lawsuits the family received in September of this year, it looks like old Rick was right.

Enough about the Sacklers. Dopesick fans really tuned in to find out Samuel Finnix’s fate. The former doctor could’ve easily relapsed upon learning Betsy had died of an overdose before he could get her to the addiction specialist who might have saved her life.

But Samuel kept showing up and trying. He apologized to Betsy’s parents, which didn’t go so well because her mom Diane angrily walked away from him. At least her dad listened to what Samuel had to say.

He also ran into his former patient, Elizabeth Ann, and managed to take her to the specialist who found a way to save her life instead.

Seriously, seeing Elizabeth Ann find sobriety felt so good. And it only made sense that Samuel ended up buying a bus so he could take more people from the small mining town to the addiction specialist. 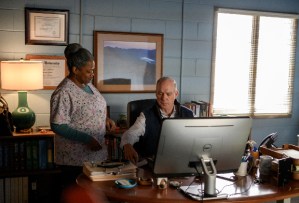 That said, could Samuel wean himself off Suboxone and get back his medical license? Thankfully he did, and Nurse Leah was right back by his side when he became a doctor again. He also ended up leading a Narcotics Anonymous-style meeting, and that felt satisfying, too.

Samuel wasn’t the only one to redeem himself. Billy turned over his stolen Purdue Pharma training tapes to the AUSA’s office. He also got married and enrolled in law school to become a consumer rights attorney. However, we were left to wonder if Amber was so lucky.

What did you think of the Dopesick finale and the limited series as whole? Grade both in our polls and drop your thoughts in the comments.