Warning: This post contains spoilers from Episode 7 of Dopesick. Read at your own risk.

One of the most poignant scenes on Hulu’s limited series Dopesick is when Betsy and Dr. Samuel Finnix talk on the phone. Betsy’s former physician called to tell her he was so sorry for ever prescribing OxyContin, and Betsy said she was just happy he was still alive.

Both doctor and patient had succumbed to the opioid and were trying their best to dig their way out of the pit of dependency. Samuel offered to take Betsy with him to see the addiction specialist that was changing his life for the better, and Betsy said she would consider it. And then an unexpected thing happened — Betsy told Samuel she loved him, and he said it right back.

It wasn’t a romantic kind of love, but the kind of love you feel for someone who knew you before the bad times and stuck around to cheer you on in hopes that things would get better. 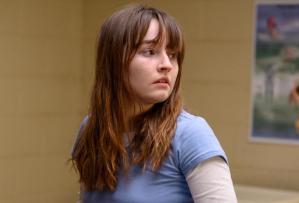 The scene proved especially tragic when Samuel, despite his best intentions, couldn’t save the fictional Betsy from an inevitable overdosing death caused by the cheaper and more lethal heroin Betsy had started using.

When the Dopesick finale streams this Wednesday, fans will learn Samuel’s fate as well.

Kaitlyn Dever, who plays Betsy, says just thinking about that scene opposite Michael Keaton as Samuel makes her misty-eyed.

“To see the struggle from every point of view meant so much,” Dever divulges to TVLine. “It breaks my heart even thinking about it. Doing that scene was a whole other roller coaster of emotion. I was so grateful that Michael was so giving. We shot most of our scenes by the time I shot that one in my final episode. And I’m so glad that we started from that foundation. Even the first scene that I did with Michael made me feel like I had known him my whole life.” 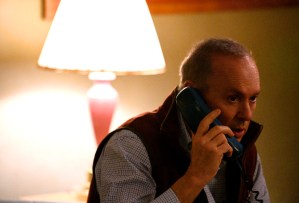 With most phone scenes, the actor on one end shoots their side of the conversation one day with cues from someone on set, and the actor on the other end does the same another day and time.

But Keaton wanted to make the scene feel more believable, so he had Dever call him when he shot his side, and he returned the favor when she performed hers.

“He called and stayed on the phone with me for every take,” Dever recalls, her voice cracking a little. “It was so reassuring. He’s incredible. Michael just has this way about him. He has a gentle and kind energy, even when bringing this character to life. You definitely forget he’s Michael Keaton. He’s just mind-blowing, and I’m so proud we established that foundation.”

Overall, Dever says she’s just glad she got the chance to tell Betsy’s story so that opioid survivors feel seen.

“I felt so much responsibility,” Dever shares, “and I immediately was aware of the fact that Betsy’s story and the story of Dopesick is so much bigger than me. I had to pull everything that I possibly could into this role because the people behind the show put their trust in me. I felt so grateful to even be sent a project like this. The opportunity to tell such an important story doesn’t come too often.”

What did you think of Dopesick Episode 7, and are you looking forward to the finale? Drop your thoughts in the comments.